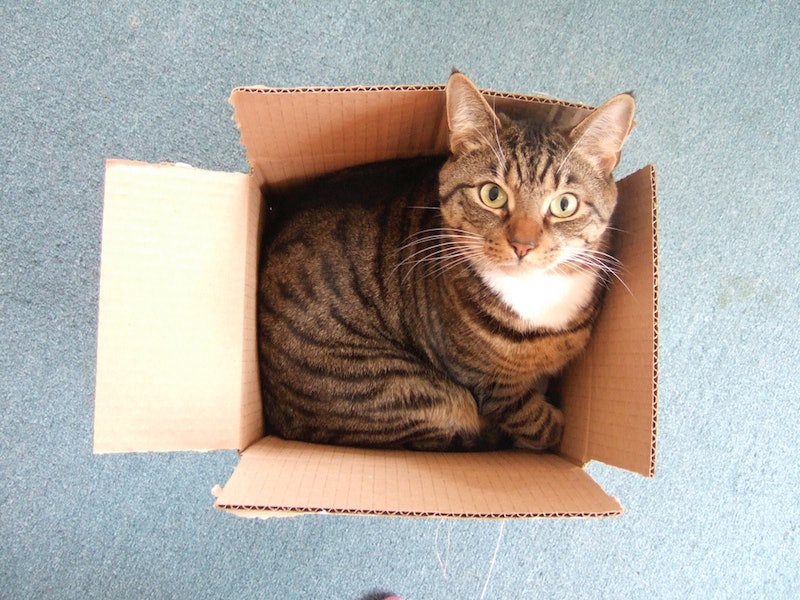 It is a truth universally acknowledged that a cat in possession of a box must be in want of absolutely nothing else at all, because as far as most felines are concerned, boxes are the best. But why on earth do cats like boxes so much? Is there a scientific reason for it? Maybe. Here's the deal:

Wired did a little digging, and based on the research we currently have about cat behavior, there are a few possible explanations for why our little kitty buddies dig cardboard so much. You can head on over there to read all the details, but ultimately, it comes down to three things: Cats find enclosed spaces comforting; cats aren't great at conflict resolution; and cats like warmth. Although Wired uses two different sources to illustrate the first two things, they're not totally unrelated. Consider: A recent study of cats at a Dutch animal shelter found that, among a group of cats who had just arrived at the shelter, those who were given boxes adjusted much more quickly to their new surroundings that those who weren't. The boxes seem to calm them — which also means they're a great place to go for cats who are feeling stressed out. Meanwhile, according to The Domestic Cat: The Biology of Its Behavior, cats would rather run away and hide than face something scary — another animal, a new situation — head on. Remember how boxes calm down stressed cats? When they want to hide, that's where they go.

The third thing, though, comes down not to a cat's psychology, but to its biology. A 2006 study found that the thermoneutral zone for domestic cats is between 86 and 97 degrees F — which is a lot warmer than most humans tend to like it. So, cats' fondness for boxes may have something to do with how comfortable they are temperature-wise: First off, corrugated cardboard makes a great insulator; and second, when cats curl up, they conserve body heat. When they curl up within a box, therefore, the cardboard helps keep their body heat in even more, resulting in a nice, warm kitty.

Again, I'll point you back to Wired for the details about all this... but I also have a few other theories of my own. They are absolutely not backed up by science, but I like to imagine that my cats have a rich and elaborate fantasy life aided by the strategic use of cardboard boxes. Does anyone else hope their cats' fondness for boxes has something to do with these possibilities?

1. They pretend boxes are rocket ships.

Or pirate ships. Or any other kind of ship, really

2. They're trying to build a transmogrifer.

Maybe Calvin and Hobbes were onto something.

3. They long to strike it rich with a homemade lemonade stand.

You can't have a lemonade stand without a good, sturdy cardboard box, right?

4. They're playing a real-life version of Metal Gear Solid.

Never underestimate the usefulness of a box as an element of camouflage.

5. They want to mail themselves to Australia.

Or somewhere else exotic (especially if they already live in Australia). What else are you going to do when you've got a bad case of wanderlust?

6. They're trying to see what life would be like if the world ended and they had to live out their days in an underground bunker.

“Day 536: Still no sign of life outside. Our supply of kibble dwindles with each passing day — should we risk a foraging mission? Perhaps the mice have managed to find a hidden location deep within the bowels of this bunker as yet undiscovered by us. We must plan carefully if we are to chance an attack— but soon, we may have no other options left. It's life or death, mice — and we intend to live.”

7. They're hoping that if they hibernate in a cardboard cocoon, they'll blossom into a beautiful kittyfly.