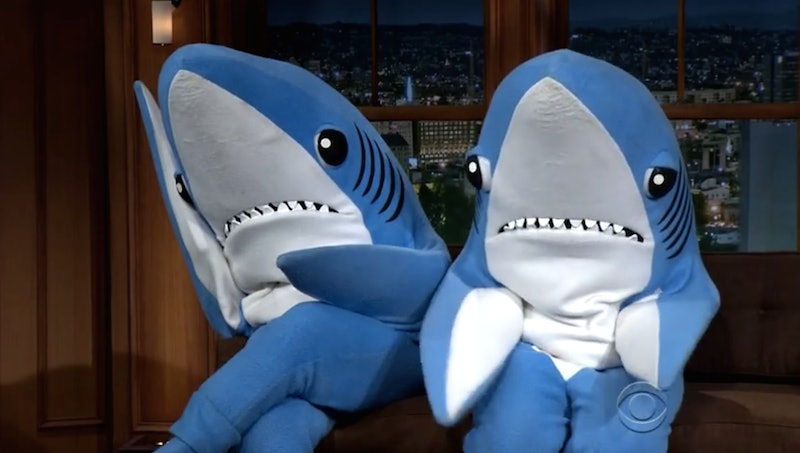 Whether you actually sat down and watched Katy Perry's Super Bowl Halftime Show or not, the fact still remains that you know almost everything about it at this point. Which means you also know the real star of the show was not, in fact, Perry, but her backup dancing sharks — Left Shark in particular. Naturally, it comes as no surprise that the dancing sharks have been getting a lot of press, almost as much, if not more so, than Perry herself. However, there's a difference between getting a lot of press and having John Mayer interview the sharks on the Late Late Show. Because, if you ask me, nothing kills a meme faster than involving Mayer in it.

Don't get me wrong. Mayer did an admirable job trying to capitalize on the public's fascination with the dancing sharks from rumored girlfriend Perry's show. It's just that his admirable job was riddled with a lot of mistakes that kind of totally killed the meme for me. Even worse, there were the kinds of mistakes that were really easy to fix. Here are the seven times that Mayer killed the Left Shark meme and the quick and easy solution he could have employed.

1. That time when the sharks couldn't talk

What is the point of having the sharks on your show to be interviewed if the whole joke is they can't talk because they're sharks? (Or, as they pointed out, because they're "not dolphins.") It would have been better to interview the sharks and have them revealed to be, like, Harvard-education sharks or sharks with Southern accents or just plain sharks who can talk.

2. The time when Right Shark looked so bored

You know you're doing something wrong when an expressionless shark costume is able to convey such an intense feeling of boredom. I felt bad for Right Shark, having to be here to deal with all this. I think some of the attention that was thrown to Left Shark should have been thrown his way so he didn't look so sleepy.

3. That time the sharks required constant care and maintenance

I don't know, but the reminder that you dragged two allegedly real sharks out of their ocean home just to give an interview seems a little cruel to my delicate sensibilities. I think it would have been a lot funnier if the sharks had come with their own entourage of people spritzing them with water, getting them Diet Cokes, and rubbing their little sharky feet.

4. That time they made Left Shark feel bad about himself

Despite the fact that they kept underlining the fact that both sharks performed equally well, the fact of the matter is that was a lie. Left Shark was the clear star of the show, but Mayer kept acting like he wasn't a symbol of freedom and independence when it came to the realm of dance. It would have been much funnier if he'd asked Right Shark why he was so incapable of keeping up with the free spirited Left Shark.

5. That time the sharks didn't even dance

Mayer tried for it, but the sharks left without dancing since he couldn't pay their fee. COME ON, MAYER. WHAT IS THE ACTUAL POINT OF HAVING THE DANCING SHARKS ON YOUR SHOW IF THEY DON'T DANCE? Like, it physically pains me. That would have been the viral video to end all viral videos, and instead I just got to see Mayer dance alone. Not cool.

6. That time when the sharks weren't conducting the interview

Listen, Mayer is great and all (I guess) and I'm glad he got his gig hosting the Late Late Show, but I think it would have been a lot funnier to have the dancing sharks host the show instead, even if it was just for a single segment. Of course, they would have to be able to talk to do so — or they could just nod their head a lot and the guest could respond as if they'd just been asked a question.

7. That time we all knew why the sharks were really there

Let's be real, guys. This was never about the sharks. This was just to fuel the reports that Mayer and Perry are back together, without actually giving us something as concrete as them flirting on the Late Late Show. And that's just not fair to those dancing sharks, who have been in the background for too long to take a back seat again to a Mayer-Perry romance.

Check out the interview below at about 8:45.