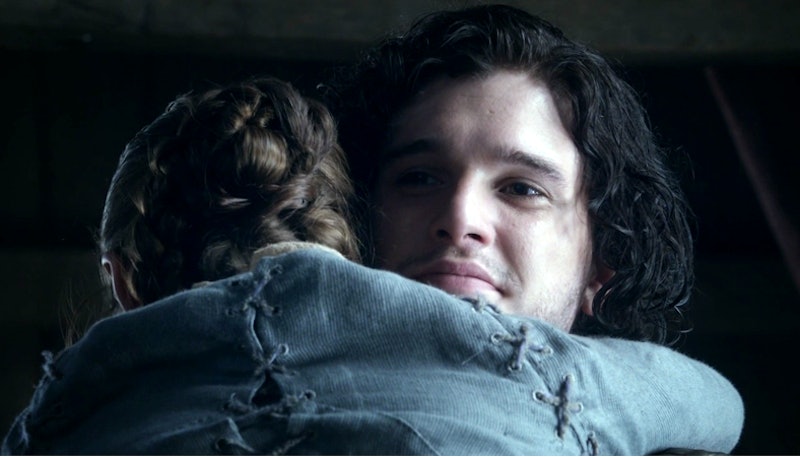 There's a lot of bonkers stuff that goes on in George R. R. Martin'sA Song Of Ice and Fire series and the HBO series based off of it, Game Of Thrones . Remember that time (yes, spoiler alert) a dude was killed by pouring liquid gold on his head? Or when another head was squeezed until it popped like a grape? And those are just the murder bits — I didn't even mention all the other varieties of mayhem that take place in Westeros and its neighboring lands. So, when I say that George R. R. Martin's original Game Of Thrones pitch was even cringier and crazier? Take into account all the other stuff that's already happened in the series, and know I'm being serious: This show was almost batsh*t insane.

However, the original conception — now leaked — may shine a new light on some things.

According to Vulture, it was one intrepid Redditor who spotted a tweet by the bookstore chain Waterstones that included a few pictures of a letter Martin allegedly sent to his publishers over at HarperCollins. Apparently written after he'd sent them the first thirteen chapters for the first of the A Song Of Ice and Fire books, it hails from a time when Martin was but a sweet summer child who thought this book series would be a trilogy. (Alas, we're still waiting on those sixth and seventh books. It's gonna be a while.)

The letter, like most things Martin writes about this series, is not brief; you can read the full thing over at Vulture. The most intriguing part, though, may be where Martin's original conception of the series and its characters differ from what ended up on the page and screen. Among the differences:

Sansa Marries Joffrey and Has His Baby

Yeah I'm pretty psyched this never happened in the series.

Each of the contending families will learn it has a member of dubious loyalty in their midsts. Sansa Stark, wed to Joffrey Baratheon, will hear him a son, the heir to the throne, and when the crunch comes she will choose her husband and child over her parents and siblings, a choice she will later bitterly rue.

Protect Sansa Stark at all costs. I much prefer the Sansa who momentarily sided with the Lannisters in the first book/season but who very much remains loyal to her family in the aftermath, forced to hide that loyalty under court tradition.

Robb will win several splendid victories, and maim Joffrey Baratheon on the battlefield, but in the end he will not be able to stand against Jaime and Tyrion Lannitser and their allies. Robb Stark will die in battle, and Tyrion Lannister will besiege and burn Winterfell.

Robb dies in the series, sure — poor dude, always doomed — but it's not in battle so much as in the epic trap of the Red Wedding; and in the series it's Theon and House Bolton who burn Winterfell, not Tyrion.

Jon And Arya Are In Love

I...uh.....no. Nope. Turns out there was some incest-y stuff happening outside the Lannister and Taragaryen bloodlines. Erase this from my memory please:

Arya will be more forgiving....until she realizes, with terror, that she has fallen in love with Jon, who is not only her half-brother but a man of the Night's Watch, sworn to celibacy. Their passion will continue to torment Jon and Arya throughout the trilogy, until the secret of Jon's true parentage is finally revealed in the last book.

BURN MY BRAIN TO THE GROUND PLEASE. Praise the great literary gods that this did not happen, especially considering that they cast a child as Arya and a grown-ass man as Jon.

Tyrion Will Also Fall In Love With Arya

Also he'd have had a way different relationship with Jaime.

Tyrion Lannister will continue to travel, to plot, and to play the game of thrones, finally removing his nphew Joffrey in disgust at the boy king's brutality. Jaime Lannister will follow Joffrey on the throne of the Seven Kingdoms, by the simple expedient of killing everyone ahead of him in the line of succession and blaming his brother Tyrion for the murders. Exiled, Tyrion will change sides, making common cause with the surviving Starks to bring his brother down, and falling helplessly in love with Arya Stark while he's at it. His passion is, alas, unreciprocated, but no less intense for that, and it will lead to a deadly rivalry between Tyrion and Jon Snow.

Damn. Getting tired of this, past-George R. R. Martin. That was a lot of information to take in, right there!

Side-note About A Plot That Might Actually Be Included:

One of the most popular theories of Jon Snow's parentage is that he's the son of Lyanna Stark, very possibly with Rhaegar Targaryen. Which makes this particular line stand out:

Their passion will continue to torment Jon and Arya throughout the trilogy, until the secret of Jon's true parentage is finally revealed in the last book.

If the theory is to be believed — and it's my personal favorite theory — then Jon and Arya would still be cousins. In this AU world where Jon and Arya are madly in love, would the fact that they're cousins instead of half-siblings be enough cause for celebration? Probably, right, considering how messed up the rest of their world is/would have been? Or does this point to a different theory about Jon's parentage?

Or is everything about this would-have-been/could-have-been just meant to be forgotten, only to be pulled out during intense rounds of bar trivia?