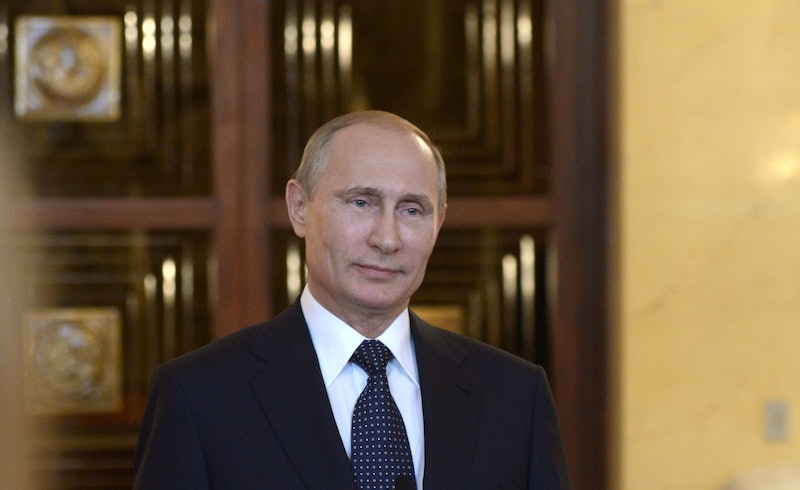 While we've come to expect the unexpected from Russia's leader, a new theory has surfaced that could perhaps — though doubtfully — shed some light on his actions. According to a 2008 Pentagon study, Vladimir Putin might suffer from Asperger's syndrome, in a report obtained by USA Today as part of the Freedom of Information Act (FOIA).

The study was conducted by contractors for an internal Pentagon think tank, the Office of Net Assessment (ONA), that helps construct long-term military strategy. Brenda Connors, an expert in movement pattern analysis at the U.S. Naval War College in Newport, Rhode Island, wrote that studies of Putin's movement reveal:

Conducted primarily through watching videos of the Russian president, the study does not claim to make a diagnosis and are largely the brainchild of Connors alone. The study quotes one Dr. Stephen Porges as concluding that Putin carries "a form of autism," and the current University of North Carolina psychiatry professor told USA Today on Wednesday that he would avoid labelling Putin as having Asperger's. When contacted by The Guardian, Porges implied that the study's techniques were shaky at best:

Everyone should drop this whole thing about Asperger’s and autism. You don’t diagnose based on videotapes.

The report stated that researchers could not make a conclusive finding because they were unable to perform a brain scan on the Russian leader. But Porges said that, if anything, the study shows possible ways of improving diplomacy with Putin, some of which included holding meetings in a quieter, more personal setting:

If you need to do things with him, you don't want to be in a big state affair but more of one-on-one situation someplace somewhere quiet.

The North Carolina professor also said that Putin's behavior and facial expressions indicate someone who is defensive in open social settings. Although these features are seen in Asperger's, highly reactive individuals who have difficulties staying calm in social situations also display these facial traits.

On top of that, the study speculated that Putin suffered an "insult" to his brain while in his mother's womb, and that she may have suffered a stroke during her pregnancy with him. It also theorized that Putin's womb-growth affected his thinking and the moving of the right side of his body. CBS News National Security Correspondent David Martin also acquired a copy of the report, which reportedly stated:

His primary form of compensation for his disorder is extreme control and this is reflected in his decision style and how he governs.

Interesting as the study's theory might be, its veracity is shaky at best — perhaps tellingly, the report failed to reach the desk of former Defense Secretary Chuck Hagel or his predecessors, according to Lieutenant Colonel Valerie Henderson, a Pentagon spokeswoman.