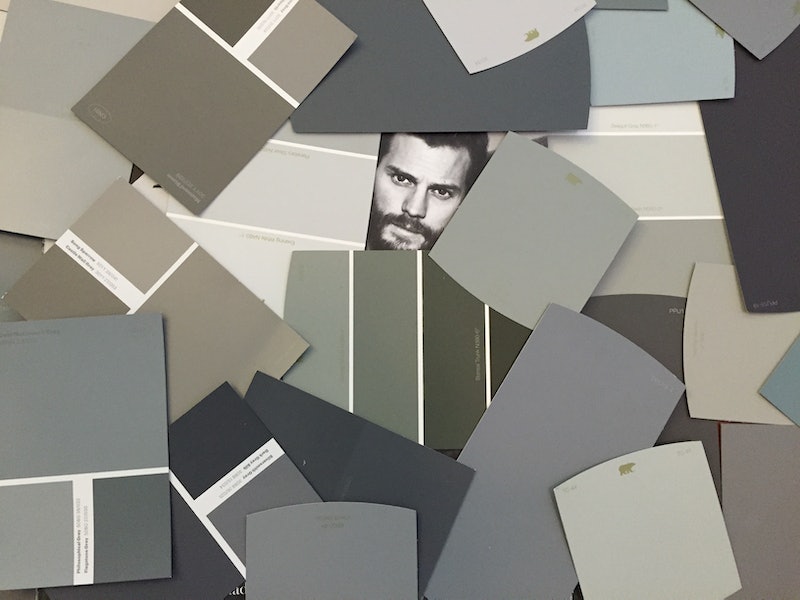 Fifty Shades of Grey, the film starring Jamie Dornan and Dakota Johnson, has been getting a lot of buzz for its raunchy sex scenes and soon-to-be-released big-screen adaptation. But if you knew nothing about the franchise, the novel turned film's title wouldn't give anything away. Fifty Shades of Grey ? What does it even mean?

The title plays with us on a few different levels. First of all, the titular character is Christian Grey — a self-made brooding billionaire, so there's that. Secondly, Grey refuses to see the world — and sexual relationships — in black and white. Is Christian's red room of pain good or evil, black or white? To Anastasia Steele and Christian, it's a grey area. Thirdly, as the book trilogy evolves, we see the many shades of Christian's character. We unravel his psyche and peel back his thousand-dollar suit and socially conforming exterior to reach his emotional core. Deep stuff, Ms. E. L. James. Christian even says, "I'm fifty shades of f*cked up!"

But because the film focuses on a plethora of grey tones, and because the Internet is already aflame with reviews of Dakota Johnson and Jamie Dornan's sultry performances, here's something a little different. Before the release of the highly anticipated Valentine's day flick, here's a fifty shades of grey review. That is, I literally reviewed fifty shades of grey, from an "Intellectual Grey" paint chip to Grey's Anatomy. Hope you brought your riding crop.

Dark Ash Review: The name reminds me of cigarette ash that's been rained on. Two things I hate: cigarettes and rain.

Flagstone Grey Review: This seems like a very literal interpretation of a color — the color of a flat slab of rock. I like its unpretentious honesty.

Philosophical Grey Review: Just like people, if anything has to tell me it's philosophical, I'm going to be immediately skeptical. Hard pass on philosophical grey.

Dawn Grey Review: Lucky for me, and for a lot of people in the world, the color of our dawn isn't grey. It's pink and purple and blue and orange, actually quite colorful. Perhaps Dawn Grey is the color of the morning in a post-dystopian future.

Flint Smoke Grey Review: According to Oxford Dictionaries, flint is: "a hard gray rock consisting of nearly pure chert, occurring chiefly as nodules in chalk." So this color can be literally be translated to Rock Smoke, which is a concept that is far too confusing for me to give an appropriate review.

Grant Grey Review: Did they mean Granite Grey? Grant is just a name, right? Or something you get to help pay for school? Ugh, get your act together Grant Grey.

Charcoal Coast Review: I like my coasts like I like toast: golden brown. Charcoal Coast would be a good name for a Depression Era painting, though.

Dark Silk Grey Review: Because it's shiny, or...?

Silversmith Grey Review: This reminds me of an old-timey metalworker, like Orlando Bloom in Pirates of the Caribbean: Billowing shirt, chest stained with soot, acceptably long hair tied in a loose ponytail... A+, Silversmith Grey.

Song Sparrow Review: When you're naming your nth grey paint chip, breathing life into the drab color with names like "song sparrow" might help consumers actually purchase the product. Or not.

Old Monterey Grey Review: People often assume old things were devoid of color, perhaps because films depicting them happen to be shot in black and white. Old Monterey, a section of Monterey, California, has always been a bustling hub of lively outdoor activities and colorful farmers' markets. Grey Shmay.

East Facing Review: East Facing is almost a shade of grey so light, it isn't really grey. And for that, I applaud it's noble effort.

Creek Bend Review: Creeks are blue, green, clear, and sometimes brown, but never grey. Get over yourself, uber-modern and/or manmade creek bend.

Evening White Review: This is straight up WHITE, not grey. Go home.

Lunar Surface Review: I always hoped the surface of the moon to be made of cheese, so this comes as a shocking blow.

Anonymous Review: Before 2014, choosing Anonymous for your child's bedroom wall color wouldn't be a political statement, but now the online hacker group has claimed the title, and headlines, with this name. I'll pass.

Distant Star Review: Distant stars usually appear white or silver to the human eye, not a freshly laid cement color. Though perhaps this is the color of a distant star through the eyes of an alien, we just need clarification here, guys.

Sage Grey Review: I suppose it has a greenish tint, sage grey it is!

Gray Crest Review: Like dry, white toast, this color is both non-offensive and non-exciting. You may exist, Gray Crest.

Silent Film Review: While Silent Films are not necessarily grey, I do like what the image — one of Charlie Chaplin running across the screen in a bowler cap and cane — evokes. So thanks for the daydream, Silent Film.

Strong Winds Review: The wind, no matter how strong it blows, usually is colorless. That is all.

Bonsai Trunk Review: Quite literal, and specific, though it reminds me of Banzai charge of wartime.

Black Bamboo Review: Is there such a thing? Intrigued.

Dark Pewter Review: The color is dull, and so is the name.

Seagull Gray Review: Seagulls remind me of the beach, and trash, and fish smells — not a Martha Stewart–esque painted home.

Silver Marlin Review: A marlin is a "large edible billfish of warm seas that is a highly prized game fish and typically reaches a great weight." THAT, definitely that color for the new kitchen.

Gray Hearth Review: The hearth is a warm and inviting place. The color grey is not.

Mansard Stone Review: Mansard roofs were often used in Victorian London, so channel your inner Austen with this shade of drab.

Moon Over Mumbai Review: I like this color a lot, but clearly my dog — who has chewed the top of this nail polish nearly off — does not. Therefore I must give it a bad review, because pooch knows best.

Suzi Takes The Wheel Review: I feel like this name is inherently sexist. I can't pinpoint why — but the misogyny is there. Suzi should always have the option to take the wheel, amiright?

Grey Matter Review: Considering grey matter, which is defined in full here, is essential for our survival, I'm pretty into it. Two gold stars for you, grey matter!

Dorian Gray Review: Oscar Wilde is the man. His original 1891 novel, The Picture of Dorian Gray, scared publishers for fear of its indecency. But the man is a legend, and so is the book. The 2009 big-screen adaptation, however, is another story. While it's foxy lead is almost enough to carry the film, it falls flat, and viewers agree. The movie received a 43 percent Rotten Tomato rating.

Grey Goose Review: The sheer amount songs written about Grey Goose makes my vote unanimous: Down the hatch, this stuff is delicious.

Grey's Anatomy Review: It's in its 57th season on air. No really. Okay, not really. But this show has been around forever. It's lost some key castmates along the way, been the host of infamous fueds, and given us a reason to care about medical dramas. But at this point, Sandra Oh, says it best: Nobody cares.

Grey Gardens Review: They reference it on Gilmore Girls, so you know it's good.

Grey Area Review: Never a good thing. I like my areas to be well-defined, please and thank you.

Grey Noise Review: I don't fully understand the concept of grey noise, but Wikipedia defines it as "Grey noise is random noise subjected to a psychoacoustic equal loudness curve (such as an inverted A-weighting curve) over a given range of frequencies, giving the listener the perception that it is equally loud at all frequencies." So, um, yeah. A+!

Gandalf the Grey Review: It feels wrong to review Gandalf, in any of his colors, as we all know there has never been, and will never be, anyone greater than Gandalf. Living or fictional. Past or Present. OKAY?!?! Okay. Moving on.

"Touch of Grey" by The Grateful Dead

"Touch of Grey" Review: Grateful Dead songs can be a bit hard to chew, this one on the other hand, could have been stolen off a Maroon 5 album. Perfectly pop-y and a real crowd-pleaser, "Touch of Grey" is more colorful than it lets on.

The Grey Lady Review: Helena Ravenclaw was a cool broad, that is until she was killed by the man who loved her, The Bloody Baron, and returned to haunt the Ravenclaw corridors at Hogwarts. Considering the Grey lady is a (usually angry) ghost, I fear giving her a bad review for my own safety. So you go girl! Or something...

The Grey: 2011's Liam Neeson flick, The Grey, is not one of his best. BUT it is a Liam Neeson action movie, i.e., my favorite kind of movie, and therefore I dub it close to perfection.