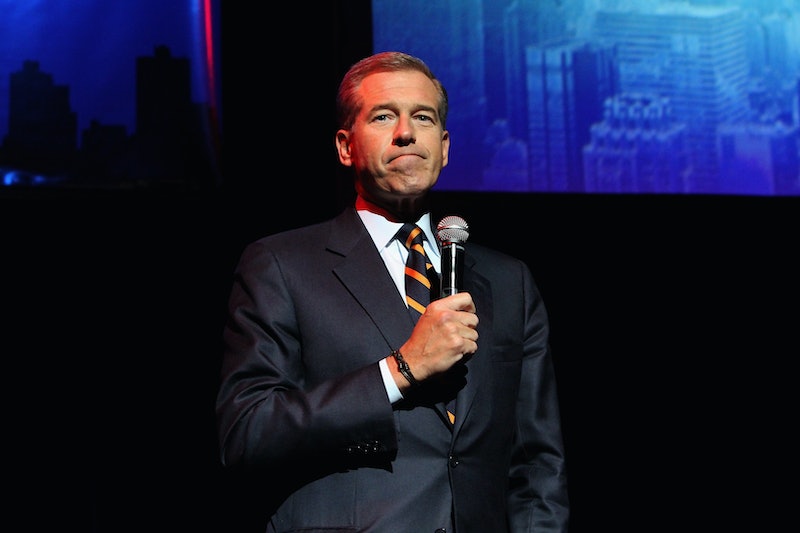 By now, we've all heard Brian Williams apologize for claiming he was in a helicopter hit by a grenade during the Iraq war, which he wasn't. The anchor of NBC Nightly News is taking a beating in the press, not just for his false statements, but for his awkward apology as well. The situation has inspired countless memes with #BrianWilliamsMisremembers. But how likely is it that he wasn't trying to buff up his image by telling a falsehood, but genuinely remembered the situation incorrectly? Is it possible Williams truly convinced himself that his version of the helicopter incident was true? Actually, it is.

Harvard psychologist Daniel Schacter explained in a 2012 interview with the Harvard Gazette that our brains are actually wired to tell stories about the future. Memory is flexible, which is a good thing, but also means it can be distorted, Schacter said. He told the Gazette:

If memory is set up to use the past to imagine the future, its flexibility creates a vulnerability — a risk of confusing imagination with reality.

Several New York University researchers studied not only how our brains remember things incorrectly, but also how we are able to convince ourselves, often completely, that what we remember is true, according to an article published in The New Yorker. Neuroscientist Elizabeth Phelps found that memories of emotional events can differ greatly from our everyday memories.

You can blame the amygdala, the visual cortex, and the hippocampus, according to Phelps' research; these three parts of the brain collaborate on creating and enhancing memory. She's been one of the main researchers on a long-term study of memories from the Sept. 11 attacks, and told The New Yorker that when an emotional event occurs, people remember the main facets of the event really well, but remember the details of the event really poorly. What's fascinating is how confident people are that their memories are not faulty, her research found.

In a somewhat excruciating apology, Williams refers to his "bungled attempt" to thank a veteran for his bravery. "I made a mistake in recalling the events of 12 years ago," he said. Williams had been on a different helicopter, and had "conflated" the two events in the "fog of war." He's certainly not the first high-profile person to incorrectly recount a combat situation, as The New York Times points out; in 2008 then-presidential candidate Hillary Clinton described running across a tarmac while under sniper fire in Bosnia while she was first lady in 1996. That also never happened.

Why do we misremember things? Schacter told the Gazette it's because our minds depend on patterns to reconstruct memories, and these patterns are based on our routine behaviors. If you bike to work almost every day, for instance, you may misremember that you biked to work on a day you actually took the bus. Because we remember things by recreating the past in pieces, memory itself is constructive, Schacter told the Gazette, so it is bound to be flawed.

Is it possible Brian Williams just reconstructed the events of the day from 12 years ago incorrectly in his mind? It seems like it's not only possible, but that misremembering things is actually part of how our brains function. In Williams' case, it had unfortunate consequences. But before we judge him too harshly: Quick, what did you eat for breakfast today?