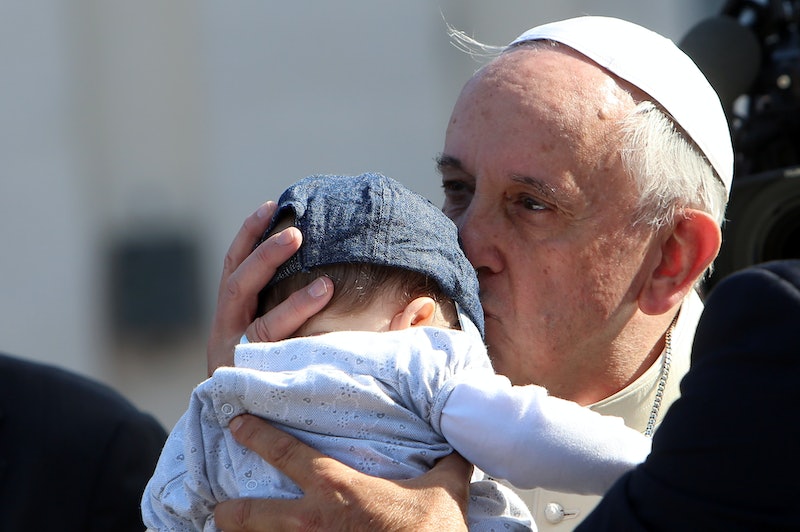 Since his election to papacy, Pope Francis' efforts to reform the Catholic Church has seen him voice opinions often counter to traditional Vatican values. But sounding more in line with Catholic mores on Wednesday, the Pope OK-ed spankings, so long as the child's dignity was maintained and it was not done in the face.

Speaking to his weekly general audience in St. Peters Square, this time devoted to the role of fathers in family, Francis said that the traits of a good father included the capability to forgive and being able to "correct with firmness" while not discouraging the child. He added:

One time, I heard a father say, "At times I have to hit my children a bit, but never in the face so as not to humiliate them." How beautiful. He knows the sense of dignity! He has to punish them but does it justly and moves on.

His remarks come a year after a UN committee aimed at implementing a children's rights treaty recommended that the Vatican amend its laws to ensure that they prohibited corporal punishment. The report stated:

The Committee reminds the Holy See that all forms of violence against children, however light, are unacceptable and that the Convention leaves no room for any level of violence against children... [Urging the Holy See to] amend both Canon Law and Vatican City State laws to explicitly prohibit all corporal punishment of children, including within the family.

Responding in writing to the report, USA Today reported that the Holy See said it would review the recommendations, but also defended a parent's right to punish their child within reasonable limits:

[Parents] should be able to rectify their child's inappropriate action by imposing certain reasonable consequences for such behavior, taking into consideration the child's ability to understand the same as corrective.

The Pope's remarks inevitably caused a stir, as corporal punishment is increasingly seen as a morally reprehensible act — particularly when performed on children — in Western countries. But labeling all forms of physical punishment as abusive opens it up to wide interpretation, and is an ethnologically dangerous line to toe, as childrearing is strongly dictated by cultural norms.

According to the Associated Press, Rev. Thomas Rosica, who collaborates with the Vatican press office, said the pope was obviously not speaking about acts of violence or cruelty against a child — instead, he said, it was about helping a child "grow and mature." In an email to the news wire, Rosica noted:

Who has not disciplined their child or been disciplined by parents when we are growing up? Simply watch Pope Francis when he is with children and let the images and gestures speak for themselves! To infer or distort anything else ... reveals a greater problem for those who don't seem to understand a pope who has ushered in a revolution of normalcy of simple speech and plain gesture.