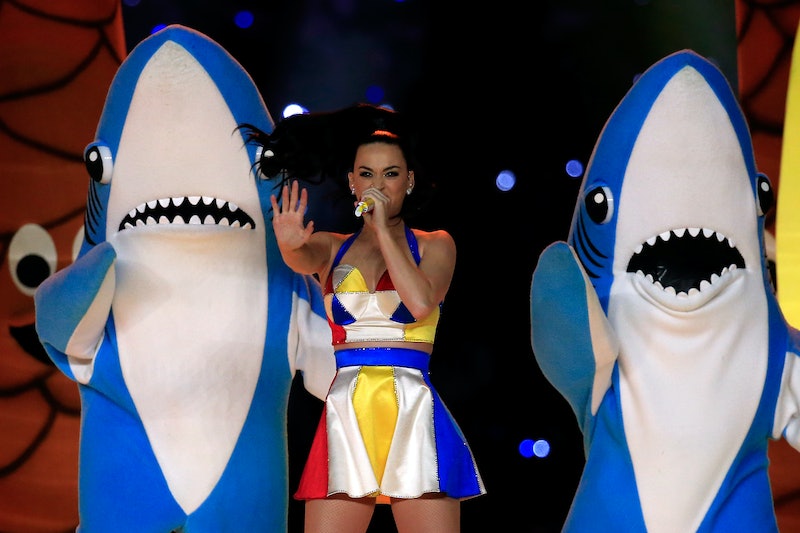 Everyone has been raving about Katy's Super Bowl halftime show performance, and for some reason that I still don't understand, people have been obsessing over the dudes in the shark suits bopping beside her. The Internet really went crazy over the left shark in particular. Don't ask me why, but people got so into it that the vendor Shapeways.com actually started selling a design to make 3D-printed "Left Shark" figurines. Umm what? Really? I still don't get the interest, but Katy Perry and her legal team were not happy about this business venture. Perry's lawyers are all up in a huff because the singer did not consent for the designer to use the image of the shark.

3D print designer Fernando Sosa, posted a letter from Perry's lawyers on Instagram. What did the letter say? "Your unauthorized display and sale of this product infringes our client's exclusive rights." The post is captioned, "Here is the cease and desist from Katy perry's lawyers.. Note that I never mentioned her name or implied that i got permission to make this.. #leftshark #rightshark#3dprint"

I am sorry if this offends anyone, especially since I am a Katy Perry fan, but I think that is absolutely ridiculous. It's just a shark, people. Plus, it's a pretty hypocritical move for Perry's team to make given that her performance gave way to many comparisons in regard to her costumes and props, shark include. The immediate meme creation demonstrated that Katy Perry's performance was not the most original thing ever.

And believe me when I say I could embed a thousand more on-point comparisons.

In regards to Left Shark specifically, Perry was far from the first person to utilize a cartoonish shark and she will not be the last. She did not invent sharks or shark suit costumes. Left Shark looked pretty similar to the Jaws 19 shark from Back to the Future Part II . Should Michael J. Fox and co. be suing Katy Perry? No, because it's just a shark costume and that's ridiculous. The shark was not prominent nor essential to either work.

You know who else utilized the dancing sharks before Katy Perry? My boy Andy Cohen had several shark dance parties on Watch What Happens Live.

In this day and age, it's getting harder and harder to be completely original. Sometimes you just have to take imitation as the most sincere form of flattery. Perry was not the first person to capitalize on people's love for a good shark suit, and she won't be the last person to add a dancing shark to the mix. It's absolutely absurd to sue over the left shark. And to be honest in about a week or two we will all forget about this week's beloved Left Shark — until the next person uses a shark suit in their act.