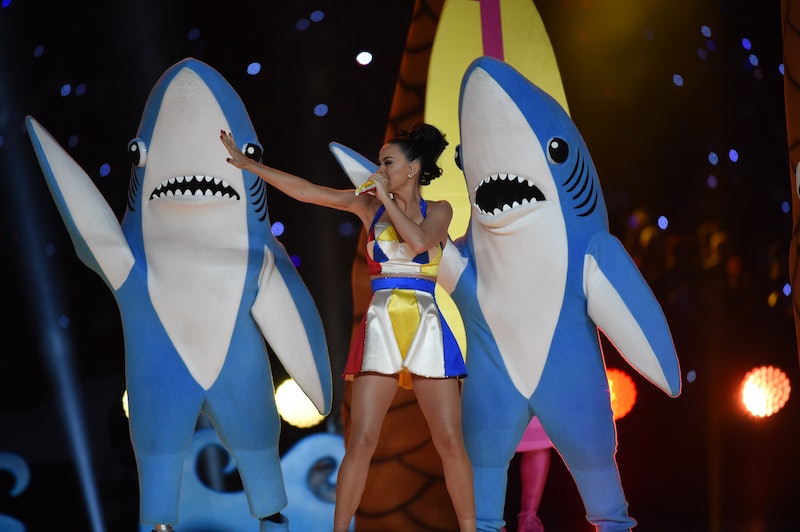 I think we've had more than our share of fun looking back at exactly how much Back to the Future Pt. II got wrong about 2015. I mean, do you own a hoverboard? Because I don't own a hoverboard. And if I had a hoverboard, it wouldn't look like the one from Back to the Future Pt. II. (I'm not bitter or anything, but...) However, it appears that the film did manage to get at least one thing right about the year in which we are now all living: Katy Perry's Super Bowl Halftime Show. Before you go whaaaat, let me provide you with proof in the form of a now-deleted post by Tumblr user sarcastickoopa.

We all remember where we were when Perry stormed the stage during the Super Bowl Halftime Show with not one, but two sharks — including massive break out star, Left Shark, who took one look at Perry's choreography and was like, "Nah, bro, I do what I want." But do you remember the moment in Back to the Future Pt. II, where Marty McFly arrives in the future and gets an eye full of Jaws 19, being broadcast in Holomax at the movie theater? Because the Jaws depicted in the film bears an alarming resemblance to a certain Left Shark.

Seriously, what goes on here? Is this yet another sneaky reference that Perry slipped into her act, one that no one noticed until now? Or is Back to the Future Pt. II truly a prophetic Bible of predictions as to how we can expect the rest of 2015 to go? By the end of the year, will we be seeing movies in Holomax and having flying vehicles? Is Back to the Future Pt. II really meant to show us what every single celebrity is going to incorporate into their concerts for the rest of the year? I'm getting goosebumps, you guys. If the film was right about this, what else will it be right about?

All I'm saying is, it looks like Left Shark shouldn't be our unquestioned hero from Perry's Super Bowl Halftime Show. It turns out that his real, legal name is Jaws 19. Get it right, people. And check out the eerily prophetic Back to the Future scene below.