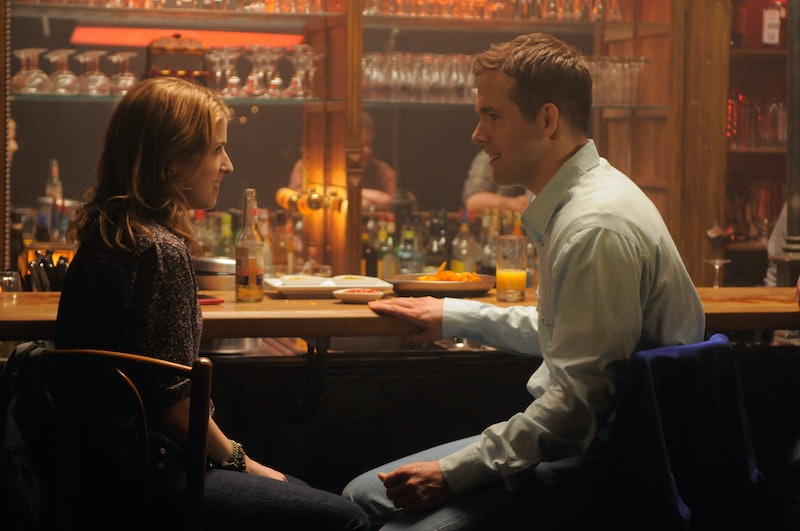 When you think about horror movies, you probably don't think about singing and dancing, but Ryan Reynolds' movie The Voices does just that. Well, it does in the end credits, and it is definitely a scene worth staying in the theater for. The dark comedy-horror hybrid hits limited theaters on Friday, Feb. 6, and it centers around Jerry (Reynolds), who is a bathtub maker by day — wearing a pink jumpsuit, no less — and a reluctant serial killer by night. The big twist? When off his meds, he hears voices from his evil talking cat and his benevolent dog guiding him to either kill, have a good time with some female co-workers, or talk out his issues with his court-appointed psychiatrist. Whose voice wins out in the end? You'll have to check out the movie to find out, but I will tell you about the amazing end credits scene that you have to stay for.

At the end of the film, something unites Jerry with his parents and some of his coworkers-turned-friends-or-lovers, including Lisa (Anna Kendrick), Fiona (Gemma Arenton), and Alison (Ella Smith). They sing '70s classic "Sing a Happy Song" by the The O'Jays, decked out in truly psychedelic orange and hot pink attire. But does Ryan Reynolds sing in The Voices end credits scene? Film reps confirmed to Bustle that everyone sings and dances themselves, so if you've ever wondered what Reynolds and Kendrick would sound like in a duet, here's your chance. There is also a Conga line earlier in the film and a scene in which Jerry and Fiona bust a move at a work party, which you can get a sneak peek at below. And just in case you aren't familiar with the tune, you can also check it out and dance along at home.