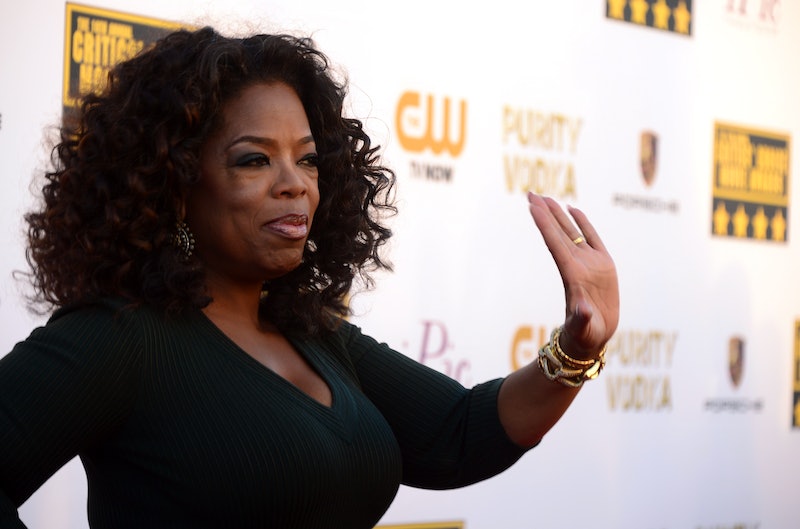 As more horrific details come to light about Bobbi Kristina Brown's current condition, naturally many celebrities who were close to the family have spoken out to give their support to the Brown and Houston families and to urge fans to keep Whitney Houston and Bobby Brown's daughter in their thoughts. While signing autographs for fans and posing for photographers, Oprah Winfrey was told that Bobbi Kristina might be taken off of life support, and the talk-show host was visibly wrecked by the news.

21-year-old Bobbi Kristina was found unconscious in her bathtub on Saturday, Jan. 31, and was rushed to the hospital where she was put into a medically-induced coma. Now, doctors have apparently told the Brown and Houston families that there is nothing more that can be done for their daughter, and Bobby Brown is grappling with the impossible decision whether or not to take her off of life support.

In the video released by TMZ, the reporter asks: "Do you have any words for Bobbi Kristina?" and Oprah asked if the reporters knew her status. When the photographer told her that Bobbi Kristina might be taken off of life support, Oprah's whole demeanor changed, and she ignored and quieted the other questions about Selma. She said simply, "There aren't any words right now," and also talked about how instrumental Tyler Perry has been in helping out the Houston family, not just in this trying time but when Whitney Houston "had her troubles."

Of course, she was asked if she was close to Whitney and responded, "I was not very close to Whitney... but it's a sad time. I don't believe there's any irony that it's happening around the same time. Because it's just been three years, right?" That's perhaps the most haunting question about the whole case, and it's somehow made even more real when it comes from Oprah, who seems to face every encounter — on her show, with fans, and with the paparazzi — with the same sense of honesty and realness.

Which makes me wonder: since she is so invested in the condition of Bobbi Kristina, will Oprah interview Bobby Brown, or any member of the Brown or Houston family? She obviously wants to respect their privacy and grief first and foremost, but if there's anyone that could help you heal, it's Oprah Winfrey.