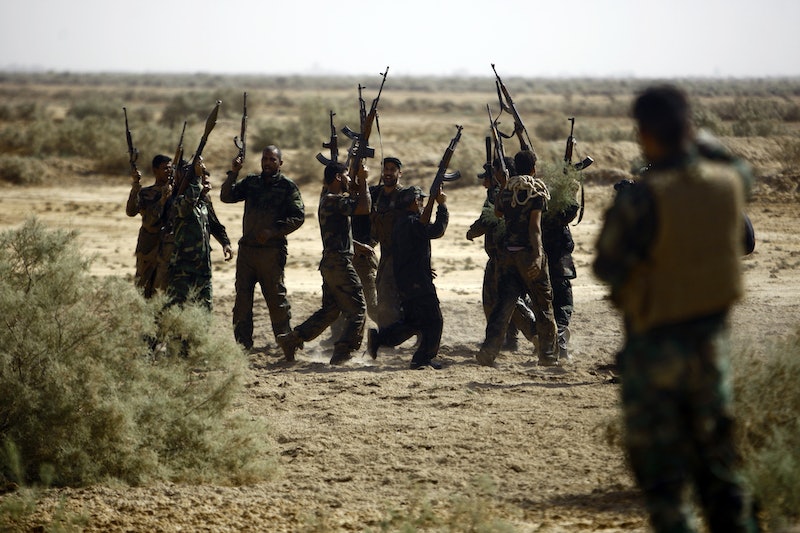 Following Jordan's promise of furious retaliation against ISIS for the gruesome burning of its pilot to death, ISIS claimed Jordanian airstrikes killed an American female hostage. In a message published by the SITE Intelligence Group that tracks jihadist movement, ISIS said a building in the Raqqa area where the woman was held captive collapsed in an airstrike and killed her. Using the Arabic term for "fighter," the message read:

The failed Jordanian aircraft killed an American female hostage. No mujahid was injured in the bombardment, and all praise is due to Allah.

Although the claim could not be independently verified, ISIS provided her name, as well as her Arizona address, reported the New York Times, in perhaps an attempt to add to the message's credibility. The White House did not have immediate comment, but U.S. officials said they were looking into the report. A person close to the case who spoke to the woman's family after the claim was released said her parents have not been notified by the White House or any other official sources.

Responding to the report, Jordan's Interior Minister Hussein Majali said that it was nothing more than a PR stunt. Providing no actual evidence of the female hostage's death, ISIS' statement contained inconsistencies — accompanying images of the purportedly-struck building had a Thursday date, though the message claimed the airstrikes occurred during Friday prayers.

The criminal Crusader coalition aircraft bombarded a site outside the city of al-Raqqah today at noon while the people were performing the Friday prayer. The air assaults were continuous on the same location for more than an hour.

The New York Times reported that the woman was ISIS' last known remaining American hostage, who disappeared in August last year after driving to Aleppo with her boyfriend. Months later, her colleagues received a proof-of-life video showing her in a hijab begging for her life. The hostage, who ISIS demanded an alleged $6 million ransom for, was an aid worker whose identity was not disclosed due to her family's concerns for her safety.

ISIS' execution of the Jordanian pilot, Moaz al-Kasasbeh, by burning in a cage, incited unprecedented levels of international fury when the group released the video. Outraged, Jordan vowed to destroy ISIS, and on Thursday bombed several of the group's strongholds in Syria. Government spokesman Mohammed al-Momani told CNN that Jordan's response to the repugnant act,

[W]ill be strong and will be decisive. We will not let this crime of killing our pilots with the horrific way it was done pass without punishment. These people will be punished.

Jordan also executed two convicted Islamist terrorists in retaliation, one of whom ISIS requested for in a prisoner exchange for al-Kasasbeh. Prior to the pilot's execution, ISIS beheaded two Japanese hostages following a ransom demand that fell through.