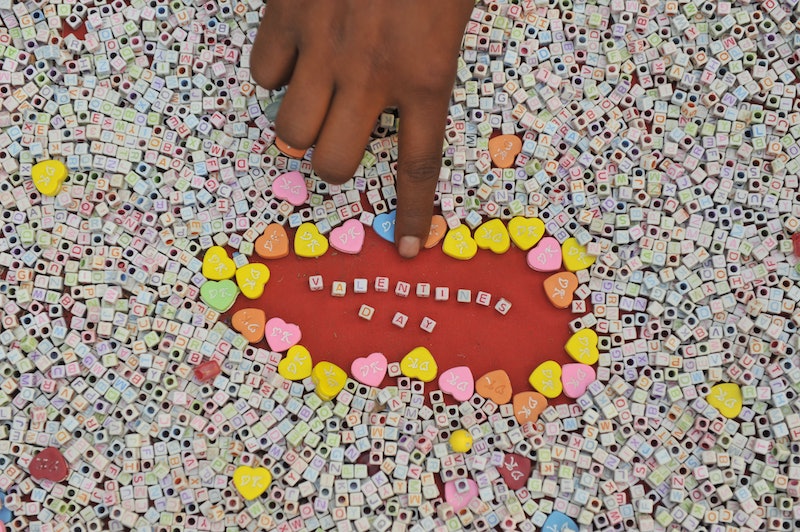 There's something so charming about recollecting on Valentine's Day traditions back in high school. Wait, let me amend that a bit — charming, and quite possibly slightly traumatic.

While I know we've all had varying high school experiences, I'm guessing a lot of you can probably relate to mine. I wasn't popular, but I wasn't unpopular. I tried to emulate fashion and have my own "style," but I failed pretty miserably. I had friends, had fingers lined with cheap rings from Claire's, and got decent grades. So, average all around.

I also never had a boyfriend — just crushes who I admired from afar. Sometimes I modified my pathway to class just in order to see them and wave, but it never went past that. In fact, if a crush knew I liked him (regardless of whether he shared these feelings), I would have been absolutely mortified. Just the thought of bringing a guy over to meet my parents? A nightmare come true.

Valentine's Day was the day I feared my crush getting a carnation from another girl, or even worse, someone possibly sending one to me as a joke. A cruel, terrible, as-seen-in-movies joke. I wanted to avoid the day entirely, but since my parents were both educators, "calling in lovesick" wasn't really a good enough excuse. Like an adult, I had to face the day and get through it, and became a stronger person by the afternoon.

Only later did I learn that a lot of people had these fears, even those girls equipped with a handful of carnations from beautiful young strangers. In high school, "love" is a misunderstood word. It's also when we, as humans, are the most insecure. Combining these two points will likely lead to some type of chaos.

However, after getting over our own uncertainty and viewing the day as a whole, Valentine's Day was actually somewhat memorable, and dare I say, kind of fun. Looking back, it was a pretty sweet tradition that disappeared once college rolled around and more extreme romantic expectations kicked in.

Since we've focused on the bad, let's focus on all of the good. Here are eight things we miss about celebrating Valentine's Day back in high school.

1. Everyone wearing red and pink

Wearing pink and red on Valentine's Day was kind of an unspoken rule. By donning these colors, it was obvious that you were open to romance. Chances are, you had a heated debate with that kid who wore black on purpose.

There was probably also a year that you completely showed your holiday spirit by accident, and felt as lame as a person who accidentally wore a red shirt while perusing Target.

2. Spending (too much) money on roses or carnations

Anything over two dollars is "too much money" in high school. But you figured you'd support the school. Whether or not you bought a celebratory flower for someone else, or to trick people into believing that someone else anonymously bought it for you, one feeling always remained after the initial joy wore off: "What the heck am I going to do with this thing all day?"

If you weren't getting flowers, you were curious as to who did. For some reason, high school is the perfect time to know everyone else's business. With Instagram and Facebook, who knows how much easier this quest for knowledge has become.

Obviously we only purchased the bare minimum, based on our own income as well as what was available at the time. The tiny pack of four chocolates in a tin with a weird cartoon on top, with a saying like "You're Groovy!" or "Be Mine 2 Day!" were, as we said in high school, "phat!" Even better, this small portion made sharing almost impossible. Score!

5. That one friend who bought the box of paper Valentines

There was always one person who was dead set on nostalgia, and bought a set of cards featuring the Powerpuff Girls or Pikachu and his gang. If they truly felt the need to spread cheer, they probably attached a Hershey Kiss alongside it. This left you with a tough decision — would you eat the chocolate now, or save it for later?

6. The artistic guy who made you a mixed CD of songs that you totally read into

One of them had "love" in the title. He's trying to tell me something, right? Maybe, but probably not. As a young lady, I loved reading into absolutely everything. The truth of the matter is, guys typically aren't as cryptic as we are. He might not have even realized that he gave it to you on Valentine's Day. They probably just wanted to share their favorite tunes after seeing you wear that Coldplay concert tee the other week and having the 15 second conversation about how Chris Martin is a genius.

7. Your best guy friend, who would shower you with sincere compliments if he saw you feeling down

Eventually you'll have kicked yourself for not realizing that true love may have been right in front of your face the entire time. But back then, he didn't look like Tom Cruise, or Jock McJerkington, or whoever you deemed to be "sexy," so he stayed in the friend zone for mega-shallow reasons. This guy made you smile often, but he definitely made you feel better on Valentine's Day, when you were pretty much a background character in everyone else's romantic stories.

Near the tail-end of my high school career, the "compatibility test" was introduced. For the low price of about five bucks, you could fill out the survey and see who your match made in heaven would be. One day I decided not to buy the gigantic cookies in the lunch line, and instead spent my parents' hard earned money on pure curiosity.

The anticipation was fun, but my list was just a bunch of people I've never even heard of before. I have a feeling these results were, in no way, even tallied correctly. Hey, at least I probably helped my school buy one-third of a volleyball with my contribution.