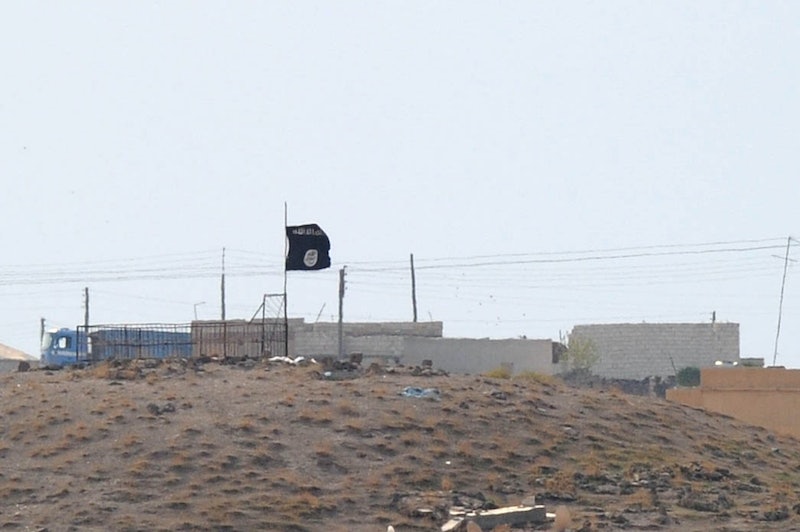 Late Friday, the State Department said there is no evidence a female American hostage was killed by ISIS during a Jordan airstrike. Earlier this Friday, February 6, a Twitter account associated with the terrorist group tweeted that a "failed Jordanian aircraft killed an American female hostage," mentioning that no ISIS members were injured in the process. An image of the aftermath of yet another attack was also released Friday, showing the decimated façade of a building in Raqa, Syria. There has yet to be any photographic or video evidence pointing to the American hostage's death, however.

Further complicating the situation, media outlets have been using the woman's name in nearly all that is reported about her. That information was accidentally made available when White House chief of staff Denis McDonough identifying her by mistake during an interview with ABC's George Stephanopoulos. The Feds responded by urging that the media stop using the hostage's name, with National Security Council spokeswoman Bernadette Meehan releasing this brief statement:

We don’t have anything to add, other than to request again that you not use the name of the individual.

That request appears to have been ignored by almost every outlet. Everyone from the New York Times to Reuters have released her name when writing about the incident. Her name is readily searchable and there have been countless articles devoted to her history and background as a humanitarian. She was kidnapped while leaving a Doctors Without Borders hospital in Aleppo, Spain way back in August of 2013 and has been held by ISIS ever since.

The female hostage's name had been firmly under wraps for months now; her family had repeatedly requested that it was not used. When White House Chief of Staff Denis McDonough accidentally named her on-air in an interview with George Stephanopoulos he was roundly criticized for doing so, and media outlets refrained from using her name when reporting on the incident. It's thought that any individual attention given to ISIS' hostages will hand the terrorist group more incentive to not release them, and even harm them.

The US is currently working with Jordan's government to pinpoint the exact location of ISIS and has been doing so since ISIS released a graphic video showing the burning death of a Jordanian Air Force pilot. Jordanian officials remain skeptical of ISIS' latest claim that they'd killed their remaining American hostage. Interior Minister Hussein Majali says the group is just trying gather additional press and that is merely a stunt. Jordanian government spokesman Mohammed al-Momani also doubts the claims that the US hostage had been killed.

In this regard, even if ISIS has kept its female hostage alive and is pretending that Jordan's strikes were effective only in killing an American — a scenario that is not unlikely — it has succeeded in garnering press generally, and about the identity of the female hostage specifically.