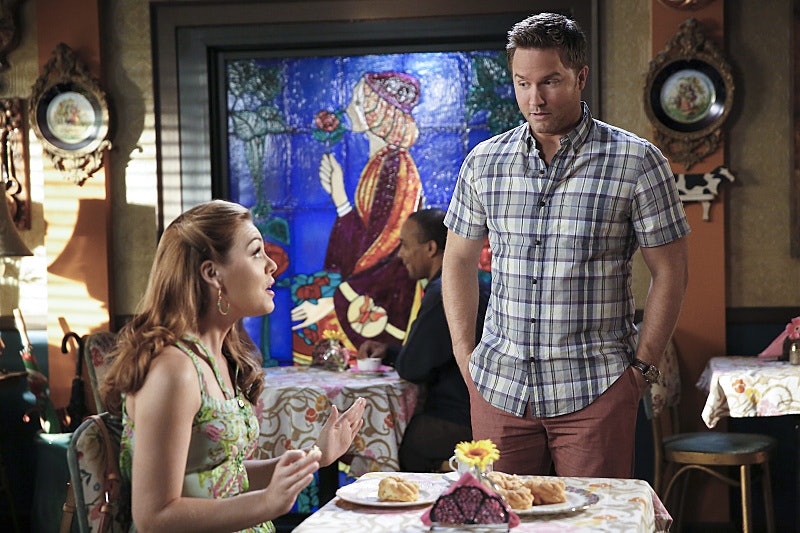 Why, oh why, does Hart of Dixie Season 4 insist on pushing my buttons week after week? For the first time, however, Zoe's pregnancy and Zade's reunion isn't what infuriated me during Friday night's "Bar-Be-Q Burritos." Hart of Dixie's latest episode finally took on the George-Lavon-Lemon-Annabeth love-web that its been dragging around since Season 3 and it did not go well. It did not go well at all. We already knew that Lemon and Lavon won't make it in Season 4, but now the George and Annabeth are getting together on Hart of Dixie . Because why the hell not, right? Wrong.

We all knew that Lemon's plan of setting up George and Annabeth so that she and Lavon could run off into the sunset without hurting anyone would never work. I mean, just look at what she's been through so far in Season 4 — Lemon's plans, whether they have good or totally selfish intentions, NEVER WORK. I'm starting to feel really bad about it, honestly, because she could really use a break, but Friday night's episode definitely wasn't the way to go about it. And I was happy that Annabeth called her out on it — there's absolutely no reason why Hart of Dixie needs to tie up George and Annabeth's storylines with a perfectly neat bow that has them ending up together just so Lemon can be happy. But, while Lemon and Lavon have decided to move on anyway, it seems like Season 4 is headed in that direction anyway.

Annabeth was indignant and then she and George ended up hitting it off anyway — mostly by bonding over how ridiculous Lemon's scheme was. And also because, apparently, they've had a lot in common all along and they just never realized it because George is just "Lemon's stuffy ex-fiancé" and Annabeth is just "a sidekick." Fine, I get it — these people have known each other forever and disregarded one another until just now when they bonded over how their mutual friend is THE WORST. But that doesn't mean that need to date, like, tomorrow. And that's exactly where Hart of Dixie is going with this.

So far, Season 4's storylines have made it EXTREMELY apparent that HoD is careening towards its finale. Zade reunited, Lemon and Lavon decided almost immediately that they wouldn't last, and George and Annabeth are apparently made for each other — it's all happening so fast and with little rhyme or reason why aside from the series obviously wanting to end on a high note, regardless of how little it makes sense.

George and Annabeth are essentially each other's rebound romances and, because they're both desperate for a happy ending, they're going to settle for a relationship because they think each other is all they've got. I might sound bitter because I'm still pulling for Annabeth and Lavon to get it together, but this just doesn't seem right, people. Bluebell needs to slow the eff down so we all can catch up.