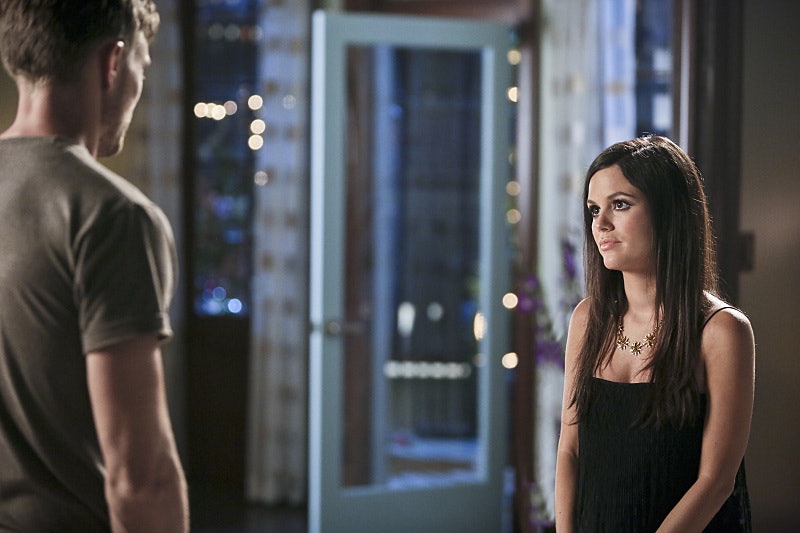 Which version of Zade are we on at this point — 4.0? Last Friday, Zoe told Wade about her pregnancy on Hart of Dixie and subsequently left Bluebell in favor of the bright lights and semi-comfort of her mother's love in NYC. Because, obviously, the best thing to do when you surprise your former boyfriend and the love of your life with baby news is to run away to New York without telling him. BUT, rejoice Zade fans, because on Friday night's "The Very Good Bagel," Zade got back together — so, essentially, Hart of Dixie is one grand gesture away from a full-scale Zade wedding in Season 4.

Does anyone else get the impression that things are moving way too fast on Hart of Dixie Season 4? I mean, I obviously don't want to watch Zade argue (when they both so clearly love each other) for all of Season 4 — there are only 10 episodes, after all. But this all just seems like way too much, even for someone who wants Zade back together forever. I know you're thinking, "But what about romance?" And, on that level, I agree that Wade's doing his best to make us and Zoe fall madly in love with his new, romantic nature. But that's not the most important thing about this relationship — in fact, it's not even close.

Neither Zoe nor Wade addressed the fact that they're both STILL desperately trying to turn each other into someone different. And that Wade is running around like a chicken without a head (seriously, where did he get the money for a last minute flight to NYC?) trying to be exactly the person Zoe wants him to be. I know, he's trying to prove that he can be there for her and his baby, but that's not a characteristic of a healthy relationship or a relationship with a future. AND THEY'RE JUST IGNORING IT.

Again, let me remind you all that the reason why Zade broke up to begin with (aside from Wade's cheating) was that Zoe loved him but she didn't like who he was. She pushed Wade into becoming someone he wasn't and he bailed, which isn't necessarily right, but it's still the course their relationship took. And now, it seems like neither of them has learned anything at all. Wade's still trying to be Zoe's dream man and Zoe's still trying to change him. Sure, they're back together, but can it really last when they're rushing through the most important changes they BOTH need to make?