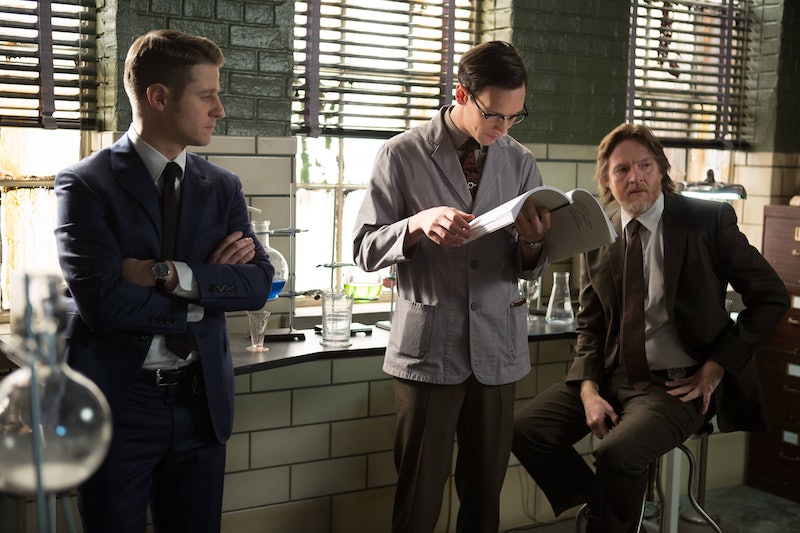 So far, I feel like Gotham's Edward Nygma has been more adorable nerd than creepy supervillain. He's stuck up for Jim Gordon's ruthless pursuit of justice and hasn't done anything worse than stay at work overtime and maybe annoy a few people around the office with his cringeworthy puns and brain teasers. But what will make Ed become Gotham's Riddler? While it may seem surprising, one of the causes could be Kristen Kringle. Introducing a potential love interest for the Riddler is a clue that they're inching him closer to embracing his evil side. Because as Harvey Bullock says, office romances always end up with someone in tears. And something tells me that Kristen won't be the one tearing up.

One thing that makes Riddler Riddler (or at the moment, what makes Nygma Nygma) is that everything he's interested in becomes an obsession. He's fascinated by dead bodies... so he takes on a job in the medical examiner's office and ignores his superiors in the pursuit of solving more cases. He loves puns and clever word games... so he becomes a riddle-obsessed villain. And when he's deeply interested in a girl? He can't force her to be obsessed with him, and thus if Kristen Kringle breaks off their little flirtation, we might see Ed's charming little crush turn into something a lot darker. She might even end up as the victim of his first riddle trap.

Unlike a lot of villains, Riddler isn't an evil person, just a hopelessly obsessed one. He's powerless to his puzzle compulsion, ignoring all the signs that his focus on coming up with riddles is actually making him evil, because he's incapable of interacting with someone without making them answer a riddle. Eventually, Riddler loses all morality, taking what he wants and stealing everything around him in pursuit of finding a death trap that will stump Batman, the world's greatest detective — a lure too powerful for the poor guy to ignore. He's basically only a bad guy because the good guys are the only ones smart enough to contend with his riddles.

In Batman Forever, it was being fired that sent Jim Carrey's Nygma off the deep end. We've seen him lose his job without losing his mind earlier this season on Gotham, but based on what we've seen so far, I think this Nygma might end up fired and dumped in short succession — and that's more than enough fuel for a psychotic break.