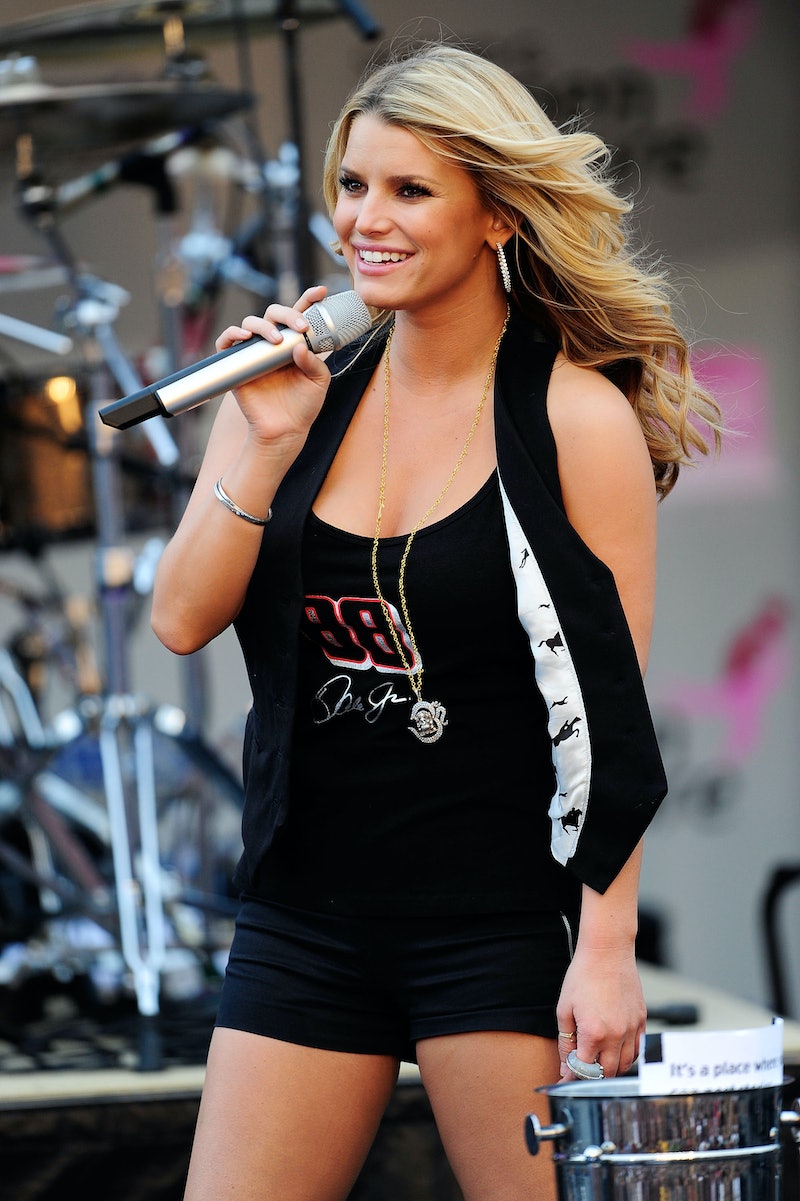 Since she released her last album in 2010, we’ve heard more about Jessica Simpson’s marriage to Eric Johnson, the couple's two cuddly tots Maxwell and Ace, Simpson's ever-expanding fashion line and her Weight Watchers endorsement than her music career. After all, music is what put her on the celebrity map in the first place. She's certainly seen plenty of success outside of the recording booth, but, believe it or not, there are some people who have no idea she was once a singer (seriously, mom?) — so it's about time Simpson started flexing those chops again, right? That said, this news couldn't come at a better time: Apparently, the thought has actually crossed her mind because reportedly, Jessica Simpson is looking to make a musical comeback.

Apparently, a source revealed to In Touch Weekly, that the 34-year-old mother of two wants to record another album. She definitely has the Midas touch — the massive empire she's built outside of music is evidence of that.

Anyway, now that Simpson's toying around with the idea of getting back into music, what kind of songs can fans expect from her? Obviously that's yet to be determined, but so far she's covered both pop and country terrain, and did a pretty spectacular job at both, might I add. That said, there's no better no way to prepare for a possible comeback without a quick glimpse into the past.

Revisiting these 7 Jessica Simpson songs should get you ready for her return:

"I Wanna Love You Forever"

I can't explore Jessica Simpson's music vault without mentioning her debut single. It still amazes me how she sang this without straining vocal chords, which is why I recommend sticking to just lip-synching it into a hair brush.

Back in the day, Simpson told everyone to let their hair down and dance around with nothing but a T-shirt on, but nowadays I'm sure she'd want us to accessorize with something from her fashion line.

"These Boots Are Made For Walkin'"

Leave it to Simpson to enlist the help of Willie Nelson for a sexed-up version of this classic song.

I don't know about you, but I totally forgot about this song until now. It's the epitome of the Britney/Christina/Jessica early 2000s era when skin-tight, hip-hugging jeans and bare midriffs were the only clothing female pop stars owned.

"Take My Breath Away"

Listen to this remake of Berlin's hit song and watch the days of Nick and Jess flash before your eyes.

Simpson's get your party on, girls' night out anthem still rocks.

The singer's mainstream foray into country music was met with some criticism, but it still performed well on the charts.