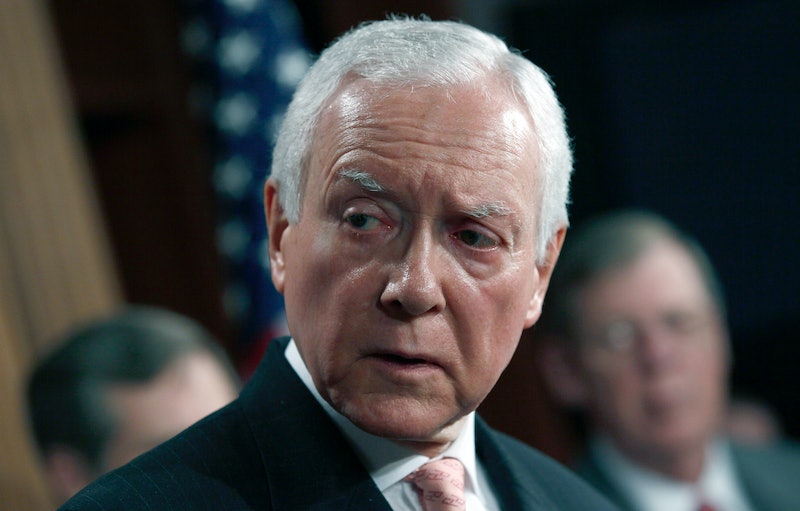 With a major Supreme Court case looming, and a base of supporters thirsting for a win, the pressure is beginning to turn up on the GOP over Obamacare. Mainly surrounding what they'll do if the health care law is indeed crippled by the high court, leaving millions of Americans without access to the subsidies that enabled them to be insured. Are they just out of luck? Well, congressional Republicans rolled out their idea on Thursday, and sad to say it's not all that new — the Republican Obamacare replacement plan is a year-old retread.

As detailed by the Washington Post's Dana Milbank, the release of this ostensibly new Republican plan to replace the Affordable Care Act was exceptionally lazily done. If that sound harsh, well, there isn't exactly a better way to describe it. From the formatting to the text itself, it was a virtual replication of the very same document that they put out last year, heralding their Patient Choice, Affordability, Responsibility and Empowerment (CARE) Act.

It's not yet a bill, to be clear, just a broad-strokes outline conceived by GOP Senators Richard Burr, Orrin Hatch, and Representative Fred Upton. If the Supreme Court doesn't rule against the Affordable Care Act this year, at the very least they'll have more time to figure this out before it could actually mean anything. With President Obama in office until January 2017, there's no chance he's going to sign anything repealing his signature achievement. If a Republican wins in 2016 and the GOP holds the Congress, though? Anything's game.

Curious what Senator Burr thinks of he and his colleagues' hotly anticipated plan? Never fear, because he's got the perfect way to explain it.

The American people have found out what is in Obamacare— broken promises in the form of increased health care costs, costly mandates, and government bureaucracy. They don’t like it and don’t want to keep it. Our nation’s health care system was unsustainable before Obamacare, and the President’s health care plan made things worse. That’s why the Patient CARE proposal repeals Obamacare and focuses on targeted reforms that will lower costs and expand access to quality care. We can lower costs and expand access to quality coverage and care by empowering individuals and their families to make their own health care decisions, rather than empowering the government to make those decisions for them.

The American people have found out what is in Obamacare— broken promises in the form of increased health care costs, costly mandates, and government bureaucracy. They don’t like it and don’t want to keep it. Our nation’s health care system was broken before Obamacare, and the President’s health care debacle has only made things worse. The Patient CARE Act repeals Obamacare and addresses the fundamental cost drivers that Obamacare failed to address. We can lower costs and expand access to quality coverage and care by empowering individuals and their families to make their own health care decisions, rather than having the federal government make those decisions for them.

Bravo, sir. That's a world-class, highly efficient hack-and-slash job. There are a few minor tweaks — swapping "unsustainable" and "broken," for example — but all in all, that probably took about one minute as compared to the ten a real new one would've. Credit to Upton and Hatch, who bothered at least to craft different quotes for the release — Upton had to, since last year's plan had Sen. Tom Coburn's involvement instead of his, so he couldn't very well hit copy-and-paste.

As Milbank notes, however, the retreading of last year's plan isn't limited just to the press release. The real tragedy, frankly, are the recycled ideas. From last year's plan to this "new" one, a lot of things look pretty familiar. There are changes around the edges — adjusting its impact on federal tax revenues to avoid allegations of a hike, for example — but on the whole, it's got all the same issues that last year's did. It raises the question of how worthy of coverage this release is at all. Is an Obamacare replacement plan noteworthy if it's a (sometimes verbatim) rehashing of last year's plan, motivated by a sense of political pressure, and likely years away from actual legislative relevance? I'd have go with "no," but your mileage may vary.