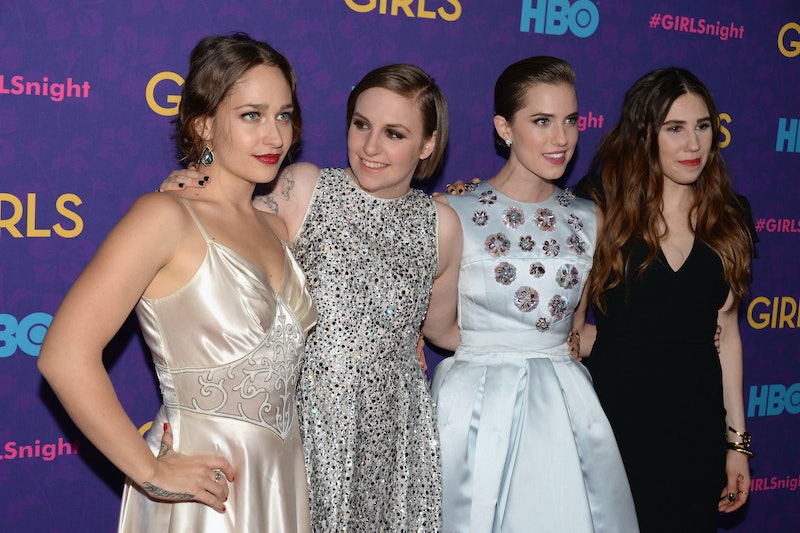 Flashback to early 2012: We barely knew Scandal's Olivia Pope, we were singing that Goetye song all the time, and the hype surrounding Lena Dunham' s new HBO comedy series called Girls was inescapable. I remember rushing to watch Dunham's 2010 indie feature Tiny Furniture right before Girls debuted on HBO so I could finally get this amazing new talent. But three years later, there are some folks have never really got Dunham's brand of storytelling at all. I think Girls has actually come into its own in its current fourth season, and has turned into a unique comedy series I look forward to every week. So, I thought it was time to give the pilot another go and see how much Hannah Hovrath, Marnie Michaels, Shoshanna Shapiro and Jessa Johansson have grown.

And I can say it's not too much, which is just the nature of your 20s. Sure, Season 4 has followed Hannah to the University of Iowa's prestigious MFA program and back, but if the last episode proved anything, she's still the same old Hannah who told her parents she may be "the voice of her generation. Or a voice of a generation." And I still can't help but relate to her far too much.

Here's what else you may have missed upon your first viewing of the first episode of Girls.

Hannah Gets Her Appetite From Her Dad

In the opening minutes of the pilot, Hannah and her dad are both chowing down on dinner at a fancy restuarant. Mrs. Horvath tells her husband and daughter to "slow down." Like father, like daughter.

Too bad as the scene progresses, we learn mother and father refuse to continue paying for Hannah's insatiable appetite — and "groovy lifestyle." But what they should realize is that her lifestyle includes eating burritos at the beach and eating nuts in class.

The first time we see Hannah and Marnie interact, they're literally spooning each other in bed. A scene later, Hannah eats a cupcake in the tub while totally naked and Marnie shaves her legs while sitting on the edge of the tub in a towel. Marnie complains about Charlie's suffocating affection for her (oh poor you, Marnie) and Hannah, well, eats the cupcake. It's so weird to think they were ever this close.

"I never see you naked and you always see me naked, when it should be the other way around," Hannah complains to Marnie. I feel like this is setting the stage for future episodes — Marnie's uptight nature and being the "bad friend." It's also a forecast of Dunham's oft-parodied reputation of walking around naked on Girls .

But don't worry, Hannah — Marie will reveal a lot more to Desi (and everyone ever) in the Season 5 premiere.

Shoshanna and Jessa Lived Together

I totally forgot until I re-watched the pilot that Jessa is Shosh's cousin and stayed at her apartment for awhile. They have a totally awkward meeting, where Shoshannah tells Jessa that her skin is "hauntingly beautiful" and calls her "so fucking classy." But that's just Shosh being her good ol' self, right?

Shoshanna even tries to figure out which Sex and the City character Jessa could be. I really wish the show did more with this odd dynamic

Marnie Used to Be the Responsible One

From her "Totem of Chat" to her friendly advice to Hannah on how to live her life, Marnie came off as the uptight, always-do-the-right-thing kind of gal. In the pilot, Marnie is her usual self, but there seems to be genuine concern and love behind all her control freak speeches, unlike her bitchiness in recent seasons.

Who knew that Marnie would one day spiral out of control to the tune of Kanye West's "Stronger"? I never would've thought it. I also never thought she'd sleep with Ray or play Peter Pan, but hey, life is full of surprises.

Adam Didn't Have a Goatee

I seriously almost didn't recognize Adam without his signature goatee. His first appearance on the show is with a more or less clean-shaven face — and no shirt on. Come to think of it, Adam used to spend a lot more time shirtless on Girls in the first few seasons.

Who's the Girl with Ray?

Ray is with a lady friend at Hannah and Marnie's dinner party to welcome back Jessa to the fold. And that girlfriend isn't Shoshanna. She's never called by name and she just laughs along with everyone else.

Upon a re-examine of my own re-watch (and reading of HBO's own recap of the episode), the unnamed gal is "the girl he met that morning who's not really into eating this week."

And He Brought Opium to the Dinner Party

Over the course of the series, Ray has worked at a coffee shop, deflowered Shoshanna, called himself a loser, fell in love with Shoshanna, and hooked up with Marnie. He's been the lovable loser guy of the group, and his recent rant about red-light traffic around his apartment was very Seinfeld-esque. But when we first met Ray, he was cool, collected, and brought opium tea to Hannah's dinner party.

That's right. Ray actually livened up the party with a tea that's totally "legal, like flowers." I guess it makes sense, since he works in the hot beverage industry. I can't help but think, though, that it's all been downhill since then for him.

Jessa Started the Series as Pregnant

When Jessa and Marnie talk in the bathroom, Jessa drops a bombshell: She's pregnant. I totally forgot this and how it set up the series. Of course, the show kinda forgot it, too, and made Jessa's bun-in-the-oven a false alarm in the next episode.

But can you imagine Jessa with a baby? That poor child.

What Happened to Hannah's Memoir?

Hannah talks a lot about her memoir in the pilot and even presents a few chapters to her parents while she's high on Ray's opium tea. We hear about Hannah's writing on and off after that, but we never hear much else about this grand memoir. She does land that e-book publishing deal in Season 2, but then the editor dies suddenly, stalling any progress.

Perhaps Hannah used it as a sample to get into Iowa, but now that she's left grad school, will she pick up where she left off? She does have a ton more to write about.