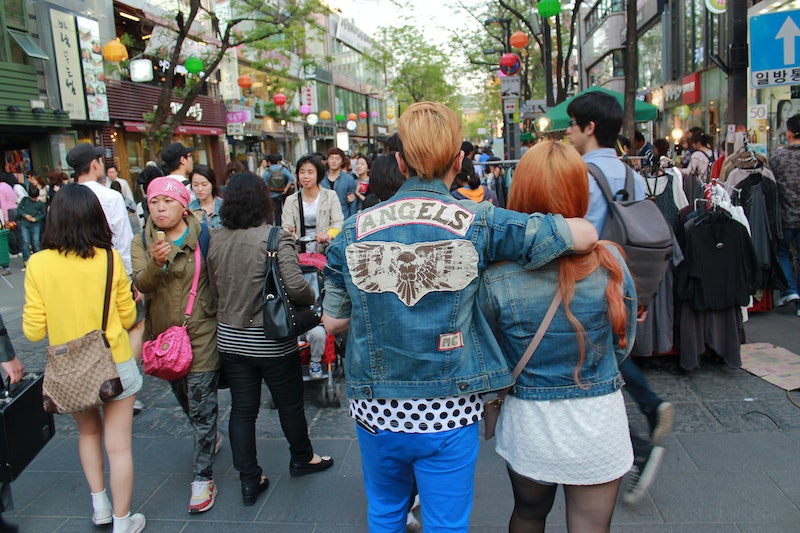 Korean street style is on point, and not just during fashion week. Korean culture places a lot of emphasis on appearance and looking proper and pulled together, but that doesn't mean outfits have to be bland and preppy. There's plenty of experimentation happening on the streets of Seoul right now.

In Korean street style, monochromatic dressing reigns supreme, but pops of color are encouraged. Shell-top Adidas are the It-Shoe. Layering becomes an art form of mixing different materials and textures. Inspiration seems to be drawn from around the world, from the flannel shirts and beanies of grunge to the denim overalls and Birkenstocks of normcore. But somehow, Koreans still always seem to be ahead of the curve. (I first saw neoprene being used as fabric for regular clothing when I was visiting my cousin in Seoul in March 2014, and was only slightly shocked to find "scuba" material at my local H&M less than six months later.) I've been impressed with this ability to wholeheartedly commit to a look, while still seeming like you didn't try that hard to pull it together. It's a polished whimsy that, in my opinion, makes Parisian fashion look a little lazy.

Since I don't live in Korea, I've had to rely on the Internet to help me find outfit inspiration, and lucky for me, and all others who want to follow Seoul's stye mavens, South Korea has the world's fastest wireless Internet connection. Over 97 percent of the population owns smartphones, so hip outfits can be spotted, snapped, and sent out to the world in a matter of seconds. Even better, there are hundreds of bloggers and photographers out on the streets capturing these trends and outfits for the rest of us to gawk at and study and try to replicate.

But delving into the Korean blogosphere can be intimidating, especially if you don't speak the language. To get you started, here are seven Korean street style photographers who capture the day-to-day creativity of Korean fashionistas.

Kyunghun Kim blogs as Halo People, and splits time between Seoul and Daegu, Korea's fourth largest city. The feed is straight street style snaps, sometimes of models and often of regular Koreans going about their days in the only way they know how — fashionably.

A professional fashion photographer, Jae-doo Lee's Instagram features a mix of pictures of parties, editorials, and, of course, street fashion. He has an eye for black, white, denim, and an occasional pop of color that looks effortlessly chic.

SOL-SOL Street Style captures and posts looks from attendees of Seoul Fashion Week, who wear outfits that are generally more experimental than those captured by the other Korean street style photographers. But it makes for some fantastic eye candy, and demonstrates the wide range of trends that Korean fashionistas are willing to take on.

817street, run by Wan-shik Kim, sports well-styled, minimalist, monochromatic outfits. Many of his photos are candid, shots of people cross the street or talking on the phone, making you feel like you're peeking into the rapid pace of life in Seoul.

A British photographer who is based in Seoul, Alex Finch's feed has both candid pics and shoots with models, generally for Korean brands. It's also an occasional look in the life of an ex-pat in Korea who moonlights as a model and English tutor in addition to his photography.

Real Street's work is also a blend between photos of models and of people on the street, but these primarily off-the-cuff photos feature more high fashion looks than those of his colleagues. He focuses on bright colors, on both his subjects and in the background, making for an overall festive feed.

This one might be cheating a little bit because it's not a single fashion photographer on this Instagram feed. CAMSCON, short for "Campus Style Icon," is a platform on which Korean fashion bloggers can post pictures of their daily outfits, with a particular focus on college students. Since each picture features a different blogger, scrolling through this feed will quickly cause you to fall into a rabbit hole of chic college kids, and maybe even help you find your next favorite Korean Instagrammer.