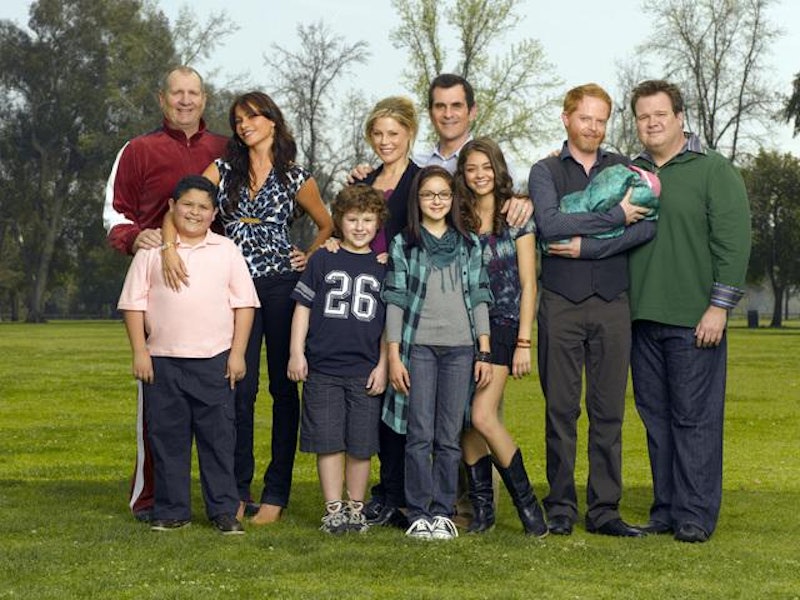 It used to feel that a sitcom was a comforting a 22 minute interlude during which it feels like everybody knows your name and will be there for you. But that was a simpler time, when American values were sweet and pure and you could have a running joke about punching your wife on primetime TV. While the television drama has certainly morphed over the past 30 years, it is the sitcom that has had a far more intense mutation, shedding its simplicity to become a multilayered space filled with unique individuals. But how, and more importantly, where are we going?

In order to examine the ways sitcoms have developed, I studied ten popular sitcoms indicative of their time and compared them based on several categories. To clarify: my ten sitcoms were based on collective criteria such as viewership, longevity, cultural impact, fandom strength, mentions over the web, Ranker lists by viewers, awards won, and so on. Some may wonder if Sex and the City is truly a sitcom or debate the merits (and assignment-to-decade) of cartoons, but the point is to show that we've moved beyond the traditional format. Hence "evolution."

In short, if you disagree with my "top" choices, think of them as just some exemplary samplings of the decades of television comedies, and rest assured that, if my picks were entirely subjective, no Chuck Lorre show would be on here.

So from Full House to The Office, Married...with Children to Modern Family, here's a brief refresher course on the past 30 years of sitcoms, and my predictions for the future.

General Themes: Lots of adorable family misadventures where lessons are distinctly learned at the end of the day. Laugh tracks are a must, catchphrases are a plus.

Female Presence: Media doesn’t like to see a woman past the age of 45 on television, making The Golden Girls a triumph. Also, Clair Huxtable was an accomplished lawyer, Maggie Seaver was a reporter, Elyse Keaton was an architect. Though the ‘80s weren’t perfect by any means, they were unique in showing women who balanced both career AND family (if not unrealistically).

Diversity Check: Barring current horrific scandals, The Cosby Show was wildly popular and featured one of the most iconic, intelligent and successful black families in media. However, there was a sort of unspoken segregation: you could have a handful of shows about people of color, but they rarely significantly mixed into predominantly white shows except as a humorous props (see Gary Coleman).

Lasting Legacy: Substantial. M*A*S*H was an important mix of comedy and drama, dealing with death and war in a very real way (the more whimsical Scrubs had a similar blend), and both M*A*S*H and Cheers are some of the highest watched programs to this day.

General Themes: You had either singles in the Big City figuring out their crazy single lives, or dysfunctional working class families being generally dysfunctional. Laugh tracks are a must, catchphrases are still lingering.

Cast Type: Four to six clusters for singles shows. Nuclear families (mom, dad, daughter, son) were still popular, with maybe some crazy in-laws or neighbors on the side for flavor.

Female Presence: Primarily part of the ensemble. What’s weird is that the ‘90s showed a return to mothers-as-housewives, with America’s mom Marge Simpson and the tacky-but fabulous Peg Bundy. Still, there are some specks of female empowerment there via Lisa Simpson and Roseanne.

Diversity Check: Kind of low. Friends and Seinfeld helped perpetuate that idea that only white people live in New York, which, uh, isn’t true. Fresh Prince of Bel Air made Will Smith's career, and you'd get an occasional token black character on other shows. But generally? Mixing races in one cohesive show was uncommon, and they ultimately made for slightly off-color stereotypes within a community.

Relationship Statuses: Everyone on Friends was screwing each other. Everyone on Seinfeld was screwing everyone. Kelly Bundy was screwing probably more than all of these people (bless), but was constantly shamed for it. Sex was not the enemy, but the framing was still hetronormative, and marriage was still a part of it all.

Set Locations: New York, NY and a smattering of suburbs.

Lasting Legacy: HUGE. The Simpsons has been on for 25 years now. Seinfeld was named TV Guide's greatest show of all time (for good reason). And we ALL know the humongous cultural impact of Friends; it’s all we’ve talked about for a month and a half.

Female Presence: Not prominent, but an important parts of the ensemble.

Diversity Check: Ensemble casts are starting to become more diverse, although, if there's a singular protagonist, then they typically tend to be a heterosexual white male.

Relationship Statuses: Again, lots of sexing around before eventually tying the knot, although Will & Grace was significant for featuring gay characters in a principle role, which changed the game from having strictly heterosexual relationships on TV.

Set Locations: New York and generalized suburbs are still the preference, though we have some work backdrops in there.

Lasting Legacy: There's some genuinely memorable series, but this was a tricky time for sitcoms. With the death of Friends halfway through the decade, some sitcoms tried to capitalize on the success of its format (HIMYM being the most successful) while others incorporated an element of quirk and a collection of different characters. Scrubs, which basically spanned the decade, was the clearest example of the huge change in sitcoms, lampooning it in the episode "My Life in Four Cameras."

Cast Type: Generally you have a lot more ensemble casts. Sometimes (with cartoons mainly) it goes BEYOND ensemble, using recurring side characters to create a community cast. What's important to note is a stress on individualism in each character.

Female Presence: GIRLS TO THE FRONT! Though treatment of women is uneven, there are more women in sitcoms, whether they’re a crucial part of a team or leading it.

Diversity Check: By no means even or perfect, but taking steps in the right direction. Brooklyn Nine-Nine has a myriad of races and Community is remarkably diverse.

Relationship Statuses: Incredibly mixed! There are singles and divorcees, and marriage is no longer strictly heterosexual territory. (Looking at you, Cam and Mitch.)

Set Locations: Three are in the title. New York is still a common setting, as is suburban LA.

Family Friendliness: TV-14 and TV-MA are more than ever the standard. So that.

Lasting Legacy: Well, it's hard to judge since it's currently 2015, but in short? Modern Family is a new classic and, despite it's low ratings, I believe the legacy of Community showcases the influence fandom has (and will have in future years).

So where do we go from here?

Stylistically, we've moved from multi-camera to single camera, and the mockumentary sitcom has become a popular choice since the runaway success of The Office. Parks and Recreation is the most obvious successor to The Office, but Modern Family may be the most successful, having won the Emmy for Outstanding Comedy Series every year since it's debut. Most importantly we've long canned the canned laughter, an archaic element used only for the shows that really need to reinforce that they're funny. All these aesthetic elements point to a strive for a sense of realism.

Several sitcoms are self-aware and self-referencing, satirical and strange. Community exemplifies all of these qualities, being the most meta of all current sitcoms, but you really get to see it in prime-time adult cartoons. Straight-laced Simpsons has finally included encounters with Kang and Kodos, and Family Guy has giant chicken battles between cut-aways. South Park has gone through many iterations, even having a vintage-feeling "I've learned something today!" era, but it currently functions as of-the-moment satire mixed with independent Michael Jackson holograms.

Another thing that's fading fast? The need for characters to be likable. Seinfeld changed the game by highlight four impressively selfish people, and shows like It's Always Sunny in Philadelphia take that exact format and put it on steroids. The '90s brought in dysfunctional families, and, toda,y they're perhaps less rude but certainly still flawed. Everyone's kind of an asshole, and proud.

The development I'm most satisfied with, though, is the presence of hilarious women, whether they're in power, struggling to keep it together, or both. While Mary Tyler Moore was the OG independent working woman, it was Liz Lemon who really brought our strong single ladies out to play, and that's wonderful. However, while we're generally being a lot more inclusive, we still have a way to go when it comes to racial diversity. For example, while Mindy Kaling broke ground with The Mindy Project for being the first Indian-American to front a sitcom, can you think of any other woman of color at the helm of a sitcom? MAYBE Gina Rodriguez, but only if you don't consider Jane the Virgin a drama.

The bottom line is this: by 2020 I foresee more female-fronted shows, and more diverse ensemble casts with an effort to put minorities in more important roles than "wacky best friend" and "crazy co-worker." We might squeeze out another truly iconic adult-cartoon-as-sitcom before the decade is up ( Bob's Burgers has Simpsons potential), as they provide a more imaginative playground to create and have a big allowance for longevity.

But more than anything, we'll eventually retire canned laughter and use a single camera to capture characters that are as unique as they are morally dubious. And while some may fear our efforts to make sitcoms more "real" and cynical will cancel out the heartwarming lesson-learning trait of yesteryears, don't worry; that emotive core will still be there. Good writing will allow those moments made to feel less contrived.

Overall I'm pretty optimistic about the where we're going with sitcoms. And whether they become grittier or highly saturated in whimsical surrealism, one thing's for damn sure: it'll all be very, very funny.

... and if that's all too complex, let's just leave it at the future of sitcoms is Broad City .