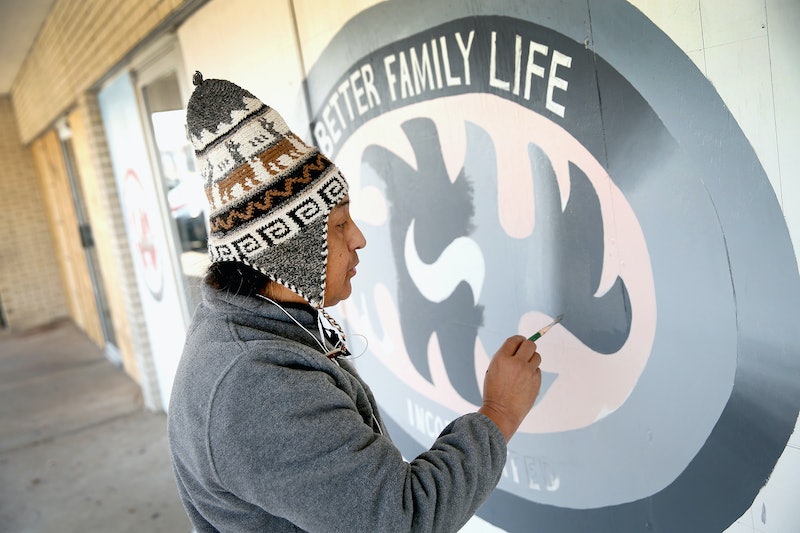 While most collegiate spring breaks are memorable for being not remembered, students are now being offered the chance to affect real change on their week off from school, applying lessons they've learned in the classroom to a very real situation. Activists in the St. Louis suburb of Missouri are offering college students the opportunity to enroll in a Ferguson Alternative Spring Break program, an immersive weeklong experience that will allow participants to "engage in a variety of activities, programs and projects that will not only help address unmet social needs in the community, but also enlighten participants on how systems of privilege, power, and oppression most often create the social issues and needs in communities." Talk about a productive week.

Spearheaded by activist group Operation Help or Hush, local leaders, organizers, and organizations have come together to offer a five sessions beginning March 7 and ending April 11, allowing students from any university across the country to join in on the experience. According to their website, the alternative spring break is "intended to impress upon participants the need for sustainable community service work and community building." Registration opened on Friday and will continue until February 25, offering students the unique opportunity to become intimately acquainted with the town and the issue that embroiled the nation just a few months ago.

Space for the program is limited, with community organizers looking for just 250 individuals to engage in the five sessions, whose activities, as The Guardian reports, will include registering new voters, running food banks, and cleaning up streets. This, organizers say, will bring the movement out of simple conversation and into action — after all, hashtag activism can only do so much. "The movement needs to be more than die-ins, more than ‘shutting it down,’" Patricia Bynes, a Democratic committeewoman for the town and a co-founder of the Ferguson alternative spring break program, told The Guardian.

By the same token, activists are not interested in students who are only participating to pad their resumes. Bynes said: "This is not ‘come party in St Louis and take a selfie at the Mike Brown memorial.’ This about giving back to the community. Should people decide not to engage, they’ll forfeit the benefits." As such, part of the application process requires potential ASBers to "indicate what types of service activities and projects you are most interested in being a part of while in Ferguson and what types of civic/political engagement work you are also interested in."

The program requires a $100 registration fee that covers both housing and board for those living outside of the Ferguson area, and $50 for local residents. Limited scholarships are available to those interested students receiving federal Pell grants. Organizers are already anticipating significant pushback to the program, with safety a paramount concern for both staffers and students. In the registration form, organizers emphasize, "Participants safety is our foremost concern and will not be compromised at any time," adding that "program staff and security will also be housed along with program participants."

In addition to security, the program makes clear its dedication to community and inclusivity, and is careful to ask applicants for their preferred gender pronouns, including options like "Ze/Hir/Hirs/Hirself," "Per/Pers/Perself," and "use name only." This practice in sensitivity, organizers believe, is crucial to the same lessons of empathy and understanding that has been so lacking in much of the recent dialogue surrounding race relations in the United States, particularly following the incidents in Ferguson and Staten Island with both Mike Brown and Eric Garner.

Organizers like Bynes hope that the alternative spring break will draw students from a number of backgrounds, both in terms of socioeconomic and cultural backgrounds. She noted, "When we talk about black issues, they are really issues of equality." As such, one of the key mechanisms by which organizers hope to affect change will be through representation and governmental policy. Bynes said:

The next step is to target the ballot box, to get people elected, and to change policy. Students should take that back to their college campuses and build an infrastructure.

While policy and elections may take longer to get underway, the program will also focus on more immediate needs of townspeople and local business owners. Charles Wade, Bynes' co-founder and one of the leaders of Operation Help or Hush, told The Guardian, "We are talking to business owners about what kind of help they need. There are those that need repairs, and we want to make that happen." Moreover, if granted access, volunteers will be able to reorganize West Florissant Avenue, which became the violent focal point of several protests this summer. The Missouri History Museum is already collecting rubble and various artifacts from the wreckage to display as a reminder of the dramatic events of 2014.

Organizers are hopeful that the opportunity will attract students eager to do their part in advancing the notion that black lives matter, and that there is significant progress yet to be made. Said Bynes, "Maybe there were some people who had planned to go down to Miami or Acapulco, and now see that there is something bigger." So if you haven't made spring break plans yet, or even if you have, consider giving back in Ferguson and making your vacation an educational experience.