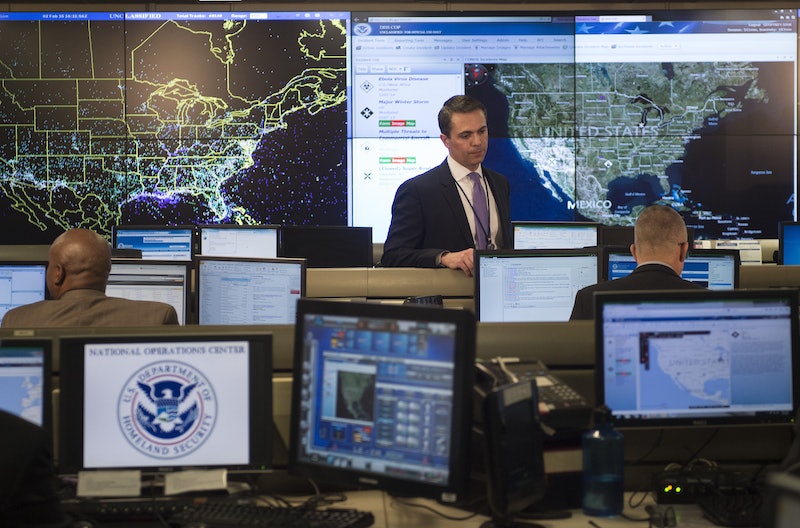 It might be just over a month into the 114th Congress, but Democrats and Republicans are already at a political crossroads, each party puffing its chest in an attempt to appear tougher and more virtuous than it actually is. This time, though, the debate — if it can be called that — is over national security funding, an issue that on the surface would appear to be above petty political bickering. Leave it to Congress, though, to prove there's nothing that can't be exploited for a few sensationalized headlines, including not taking action on the Department of Homeland Security budget.

Back at the end of 2014, Democrats and Republicans passed a budget omnibus bill that funded most of the government throughout the end of this year. Except, it turns out, the Department of Homeland Security, which will run out of funding at the end of this month unless Congress can pass another funding bill. At a time when ISIS, Boko Haram, and vigilante terrorists are wreaking havoc across the globe, it makes sense that most Americans are not pleased with this.

But, because most of the workers — ranging from airport security, the Secret Service, the Federal Emergency Management Agency, immigration agents, and the Coast Guard — in the department perform work that is considered necessary to protect human life and property, much of the department (200,000 of the 230,000 employees, according to the AP) would keep on keeping on, even without the passage of a funding bill. Pay would be furloughed for about 30,000 employees.

So, what exactly is Congress' hold-up? Republicans tacked a rider to the bill that would end President Obama's executive actions to defer deportations and provide legal services for some groups of undocumented immigrants. Naturally, Democrats aren't super excited about that, and Senate Democrats have filibustered the bill three times — with Democratic leader Harry Reid blocking even a procedural debate on the bill — after the Republican-led House passed it.

With the two parties playing yet another (annoying) game of chicken, the issue doesn't look like it will be resolved anytime soon. Homeland Security Secretary Jeh Johnson told CNN that Congress should pass a "clean" bill and focus on immigration policy after his department has been funded. He said:

If people in Congress want to have the debate about immigration reform, let's have that debate, but don't tie that to funding public safety at Homeland Security for the American people.

Even Republican Senator Ted Cruz said Republican leadership should take up the issue at a different point in time. "It's now up to leadership to lay out their strategy, I told them this was not a winning strategy and they went down this road," Cruz told CNN, also adding that Democrats are exhibiting "stunning irresponsibility" by filibustering the funding bill.

The biggest kicker? According to the AP, workers in agencies funded by fees as opposed to government appropriations will continue to draw a paycheck during a potential shutdown. And the salaries for employees of the U.S. Citizenship and Immigration Services are paid by fees. So all of this hullabaloo is over immigration policy, which would not be affected by a shutdown. Instead, other federal employees, who have nothing to do with the inanity, will face the consequences.