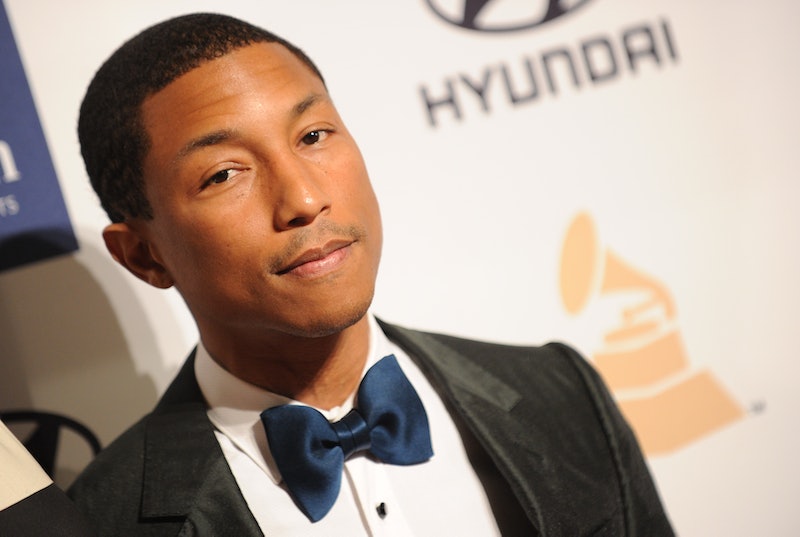 I'm not even going to bother to pretend that I was pulling for anyone in the Best Pop Solo Performance at the 2015 Grammys besides the wonderful Taylor Swift. (All right, so my loyalties were divided between her and John Legend — but, come on, you guys, it's John Legend and I have two ears connected to a heart.) When Swift and Legend were both nominated for Grammys, I absolutely lost my chill, and thus I was sitting at the edge of my seat when it came time to announce who was taking home that award for Best Pop Solo Performance. However, my dreams were dashed when not Swift, not Legend, but Pharrell Williams won the Grammy in this category on Sunday. Then, my broken heart was stitched back together by the hilariously awkward speech that followed.

When Pharrell took the stage to thank everyone for his victory, I wasn't sure what I was expecting him to say, but it certainly wasn't this. "I'm not going to make this awkward and long, because I was so prepared for everybody else that is so talented in that category to walk away with that award. I'm honored to be grouped with them. They're all really great artists," Pharrell began, before thanking his team and his label. "This is super awkward. I'm going to moon walk my way off the stage right now."

Sadly, Pharrell did not actually moon walk off the stage as he promised, but I can't say I blame him. After all, the symbol of his happiness and confidence happened to be missing at this year's Grammys. I am, of course, talking about his fantabulous hat, which did not make an appearance. While Pharrell was busy accepting the award for Best Pop Solo Performance, Pharrell's hat was busy being Forever Alone somewhere else. I'm quite confident that, had he been wearing it, we would have seen some more moon walking and some less awkwardness.

So, clearly, it wasn't just about Best Pop Solo Performance for Pharrell tonight. Clearly, he went home with two Grammys — one for that category and one for Most Self-Aware Awkward Speech. Still, despite that awkwardness, he managed to come across as incredibly humble, endearing, and even a little bit funny, leaving everyone relating to him in just about the best way possible. In that moment, we were all Pharrell.

More like this
Everything To Know About The 2023 Grammy Awards
By Jake Viswanath
Twitter Is In Awe Of Taylor Swift’s “Lavender Haze” Music Video
By Jake Viswanath
Twitter Wants To Dance With Anne Hathaway At Paris Fashion Week
By Alyssa Lapid
Hailee Kaleem Wright's Topsy-Turvy Path From MTV To Broadway
By Samantha Leach
Get Even More From Bustle — Sign Up For The Newsletter
From hair trends to relationship advice, our daily newsletter has everything you need to sound like a person who’s on TikTok, even if you aren’t.