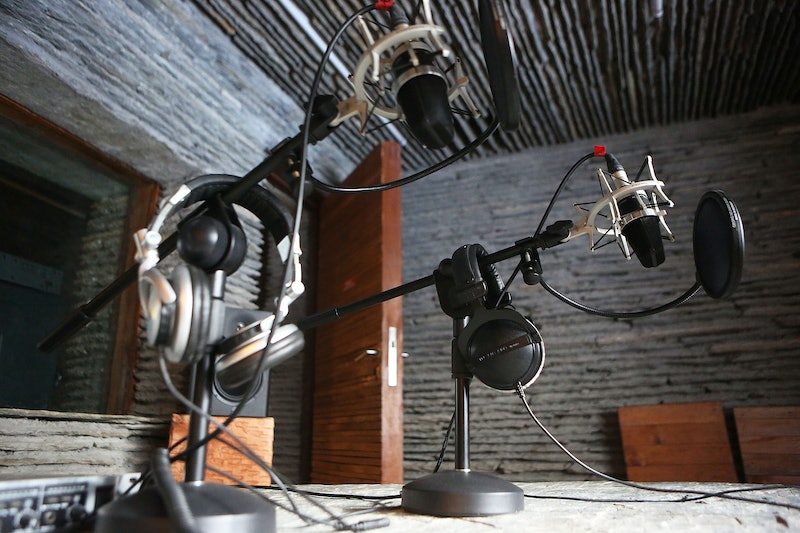 After binge-listening to the first five episodes, it's impossible not to wonder if the stories on podcast Invisibilia are true. All of the episodes so far are based on true physical phenomena, from synesthesia to blind people using echolocation. The show then takes these strange and surprising conditions and stretches them to the extremes. So instead of a woman who has typical synesthesia, they interview a woman who can literally feel the physical and emotional feelings of everyone around her. They take things that many of the audience members might find familiar or normal and then use those to show how people who may have extremely uncommon experiences are actually not that dissimilar to the rest of us.

But a couple of listeners' comments on the show have shown dissatisfaction with how Invisibilia portrays mental illness and its treatment. The show only has a short period of time and a limited number of interview subjects, and so when explaining an entire condition, it's easy to give certain areas short shrift, and it's disappointed many people to see that mental illness isn't treated the way they wanted her to be.

But the stories they tell are designed to show the similarities we all share, no matter what we go through. And while they all have basis in reality, episodes range from barely surprising to jaw-droppingly unbelievable. So here are the five episodes of Invisibilia, ranked from the easiest to relate to all the way to the hardest to relate to:

"The Power of Categories"

Categorizing ourselves is one of the most relatable things, especially in this day and age where we're asked to pick sides in the great "cake versus pie" or "puppy versus kitten" debates online. This episode is the most relatable of all. Sure, Paige's gender fluidity is not what many people experience, but it has been documented and is becoming a part of what we're realizing is a part of the gender and sexuality spectrum, even if she eventually realized that she is a woman.

It's not about putting on high heels or speaking in a deeper voice, it's about feeling a sense of belonging in your own body. If you can't relate to that, you've never experienced an illness, watched as a body part fails to respond how you're used to because of injury, or even gone through puberty.

"The Secret History of Thoughts"

I'd hazard a guess that most people who are devouring a NPR podcast think a little too much. And the sensation of consuming a podcast is almost as though it's invaded your thoughts, with no visual component to confine it to a screen. So while the idea of being trapped with nothing more than thoughts for years is at its core a horrifying one, we almost get to experience it for an hour, lost in what only you can hear, eyes not working, voice not engaging as you consume the story of Martin Pistorius.

And our pop culture education has given us an idea of what being comatose is like — lying gently, beautifully on a hospital bed while family members weep by your bedside — that could not be farther from the truth, but that does give us an avenue into this episode that's not present in some of the following ones.

"How to Become Batman"

This episode deals with echolocation for the blind: something that can help some of the disabled population have greater freedom. What's fascinating about the episode subject Daniel Kish is that he's the one endeavoring to relate — he believes blind people shouldn't be immune from getting lost, breaking bones, and making huge mistakes, just like the sighted population. Being blind is no reason to stay close to home. Having more empathy for the blind means accepting the messiness of their lives.

And while it's insane to listen to Kish's clicking and think that he can hear the difference between them, who didn't spend all night trying to walk around in the dark making noises after learning about how bats can see in the dark?

Not many people can relate to the idea of having literally no fear. But we can all relate to wanting to not have any fear, as it might stop us from speaking up and asking for a raise or spending some money on a splurge. But what was most shocking about this episode is how much the woman with no fear needs to be protected. Finding the function and use of fear is an unexpected way to take an episode that I'd initially expected would be all about bungee jumping with no hesitations.

I think this one's definitely the oddest story and Amanda's experience the hardest to find a scientific explanation for. Synesthesia, the conflation of two senses, often resulting in certain sounds or smells having colors, is pretty common, but her version of the condition has her physically experiencing the same sensations as anyone she looks at. Ironically, for a person who naturally has a certain type of empathy, it's impossible to empathize at how much Mirror Touch impacts Amanda's waking life, but the pain of having a parent or a partner not be able to meet you halfway is recognizable, as is Amanda's struggle to reconcile when she needs to prioritize keeping her emotions level and when she needs to brave the outside world in order to support her family.

Even the most outrageous episode of Invisibilia has, at its root, something relatable and human.