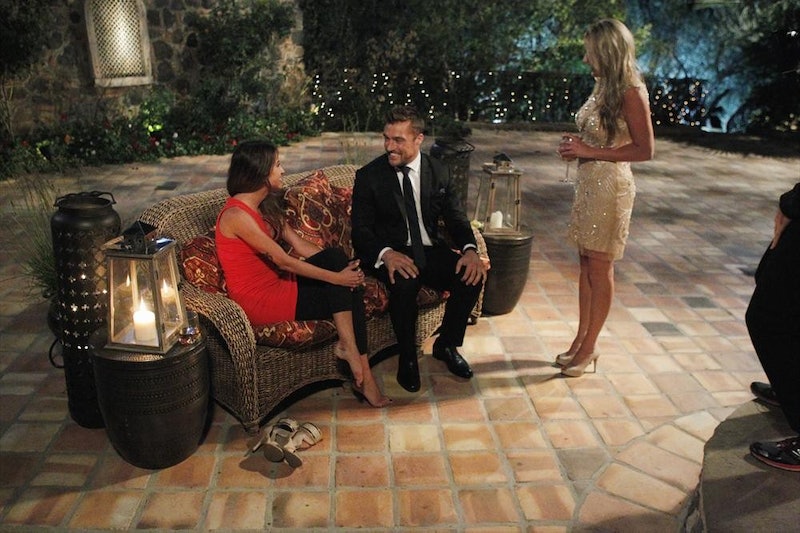 It's obvious that The Bachelor puts women on the show into a lot of atypical dating situations they'd never encounter on real life. Who the hell wants to go on a group date and compete for a potential husband's attention? Or live in the same house with everybody the guy you like is also interested in? Both of these things are recipes for disaster, but it's the reality that contestants on The Bachelor are choosing to face in order to spend the rest of their lives (or, you know, the next few months) with Chris Soules. Unfortunately, there is one weird convention that is worse than all of them: The Bachelor two-on-one date. It doesn't happen every season, but when it does, it's usually the king of bad ideas. And this week, it's coming back, and by all accounts including ABC's only press release, it sounds like both Season 19 contestants are eliminated on the 2-on-1. And that prospect made me wonder how often this happens: Will this be the first time a 2-on-1 date on The Bachelor sees both women eliminated?

As it turns out, double elimination has happened before on The Bachelor, but only once: In Season 14, Jake Pavelka's season, which aired in 2010. On a 2-on-1 date involving Ella and Kathryn, neither of them got a rose — and it wasn't even the result of a dramatic situation. After an otherwise uneventful dinner in a cabin in Big Sur, Jake took each woman aside and filled them in on the fact that he just wasn't feeling it. For Ella, Jake just didn't want to keep her away from her son if he wasn't sure about her. And as far as Kathryn was concerned, he just wasn't feeling it. Boring? Yes. Totally unheard of? Until then, absolutely.

I have a bad feeling it's about to happen for the second time this Monday, though, and ABC's synopsis doesn't make me feel any better about the situation.

On the always unpredictable two-on-one date, Chris takes two combative women on a helicopter ride over breathtaking Mount Rushmore before landing in the middle of the Badlands. Each bachelorette figures she will send the other one packing. The two of them badmouth each other to Chris and what transpires is one of the most explosive altercations ever. When the dust clears, who is still there?

Let's narrow this down. Who is the most dramatic of the women left? Whitney would never badmouth. Becca would never badmouth. Carly? Probably not, especially after she made us all fall in love with her during last week's episode. Kaitlyn speaks her mind, but I think she's smarter than that. I'd have to bet that the women on the date are Kelsey and either Ashley I. or Mackenzie. And I'd bet every Neil Lane ring in The Bachelor-verse that both of them are hitting the road as of 10 p.m. Monday night.

So what now? We wait. And we cross our fingers that Kelsey's "amazing" love story ends here. Pretty please, ABC?