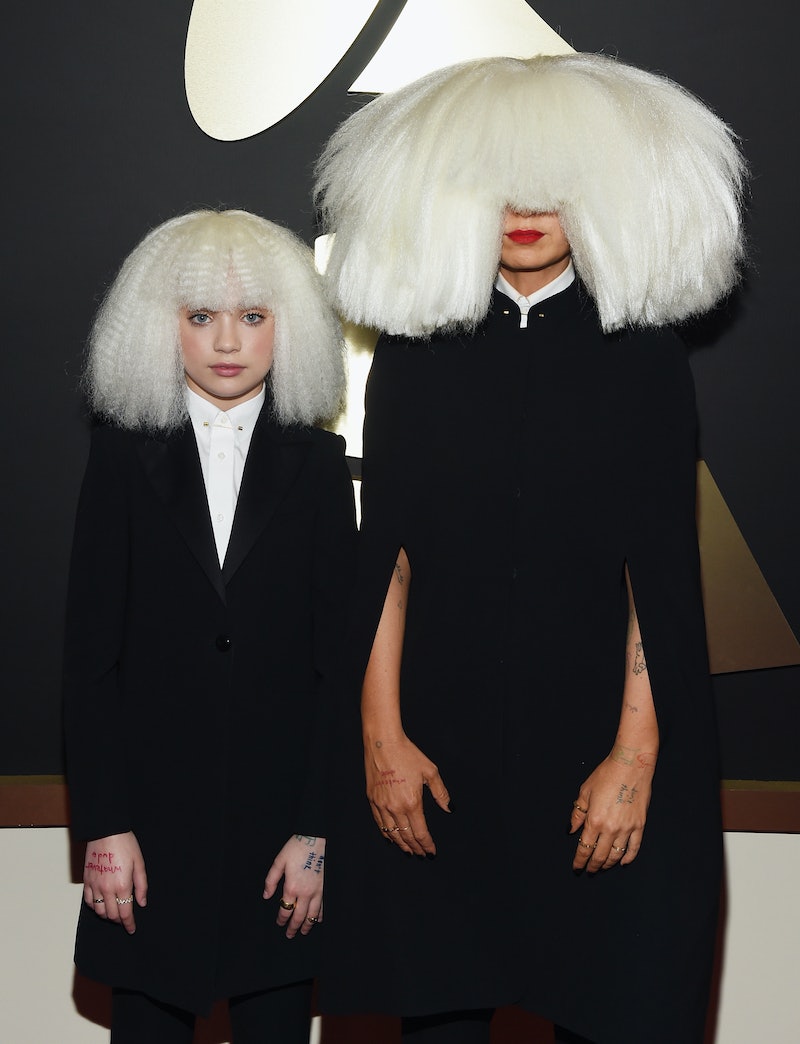 Although Australian-born hit maker Sia Furler is nominated for four Grammys tonight and is confirmed to perform, it was still unclear whether or not she'd show up to the red carpet. Furler is notorious for never showing her face or doing any sort of publicity, especially for celebrity-fueled events like this, so we're more than pleasantly surprised that she's decided to strut her stuff this evening...even though she's shielded her face with a ginormous wig! She also brought along "Chandelier" star Maddie Zieigler, who wore a matching ensemble. Adorable.

Maybe Sia's point was to really emphasize her signature platinum white bob, which was the cover art for her Grammy-nominated album 1,000 Forms of Fear. It was also what Ziegler rocked in the "Chandelier" music video, as well as what her dancers have been wearing during their performances. Whatever the reason, I absolutely love it. Although I'd like to see more of her charming, smiley face, I wouldn't have expected anything less artistic and dramatic from Furler (speaking of artistic, Brad Esposito's tweet about her resembling Andy Warhol is spot on). While it may be hard to peel your eyes away from Furler's super fluffy wig, let's take a moment to address how gorgeous and refined the rest of her outfit looks. That black cape dress with those classic black pumps are simply divine.

Although she rarely makes an appearance on the red carpet, when she does, Furler always kills it. She's got a great, fashion-forward sense of style, whether she's rocking a gold metallic tunic, a casual boyfriend-jeans-and-pink-pumps ensemble and now, a massive wig. Could tonight could be the beginning of more public appearances for Furler? I'm guessing not. But this is a huge evening for her, so I'm glad she decided to show up for the Grammys at the very least, even if she's hiding most of her face. Now, we're all just left to wonder whether she'll take the stage during her performance or if she'll depend on Ziegler to do work? Fingers crossed for both!