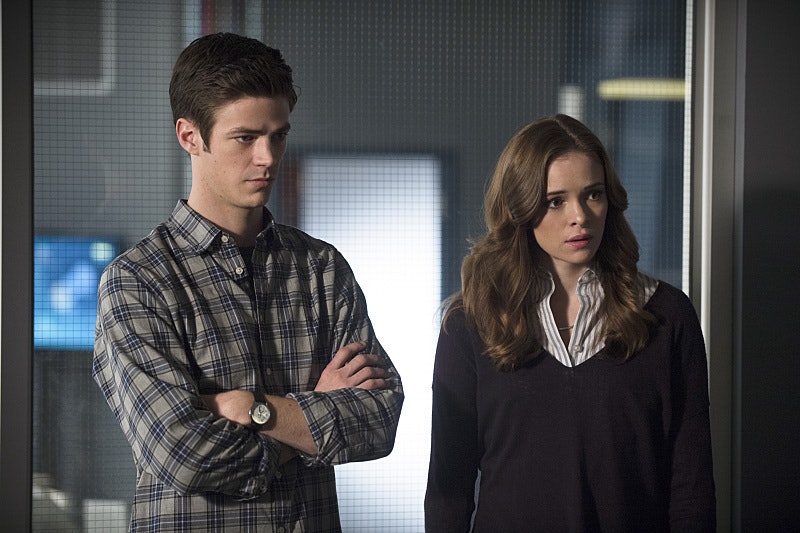 One of the greatest things about modern fandom is the ability to bond over your favorite ship and talk about it across various forms of social media. A lot of times some truly insane pairings form in the fandom. But that's OK... until the writers actually start to pander to the crackship. This is exactly what's happening on The Flash with Barry Allen and Caitlin Snow, a pair that have become a somewhat heated obsession in the fandom. In the Feb. 3 episode "Crazy for You," Barry and Caitlin vow to move on with their love lives, which results in a drunken night out and a few glaring examples of fan-pandering wrapped in a bow for Snowbarry shippers.Come on, The Flash, you can do better.

What makes this pandering, Tumblr-friendly mess even worse is how badly the show is handling Iris West. Iris is to Barry what Lois Lane is to Clark Kent in DC Comics. His story doesn't work without her. Candace Patton has such great chemistry with the rest of the cast that it's a shame they're dumbing down her character to fit whatever weird, emotional arc they're aiming for. But instead of just singing the praises of the superior pairing, here are the issues I have with SnowBarry that just might make you rethink this 'ship.

They Have No Chemistry

This is what it all comes down to. Barry Allen and Caitlin Snow have no chemistry. While some people have said that Caitlin is the watered down Felicity Smoak stand-in for The Flash, the way she is written and interacts with Barry comes across as strictly platonic. Often I feel that she operates as an older, level-headed sister for Barry and Cisco.

Racism In The Fandom

I just hope that before they start 'shipping SnowBarry, fans give Iris and Barry a fair chance. Unfortunately, some viewers aren't, and actually give the impression that they prefer Caitlin with Barry because Iris is a woman of color. Even though The Flash is only in its first season, the fandom has already gotten very heated. Here's an example of some of the awful, racist comments that have been made towards Iris.

This is a very undeniable example of the racism found among some SnowBarry fans, but it also shows up in more subtle ways.

A lot of the hate toward Iris mirrors the microagressions above that completely misunderstand her character to justify the SnowBarry ship. It isn't surprising that great feminist-minded Tumblrs like Iris & The Flash and Iris West Defense Squad exist to champion Iris' character.

This thread from Oh No They Didn't illustrates the great defense of Iris other fans of The Flash are doing:

The writing for Caitlin has been kinda weird, right? So, she's supposed to be emotionally closed off because she thinks her fiance Ronnie Raymond died in the particle accelerator explosion. But it turns out, he's still alive as Firestorm. He's obviously in a bad place and needs help. Instead of trying to find out the truth beyond one episode, she seems to have completely given up on him. Hell, Cisco seems more invested in saving Ronnie than she is.

This will change in upcoming episodes as The Flash explores Ronnie's transformation and the potential for him to resume his relationship with Caitlin. It just doesn't make sense to ship Barry/Caitlin when in-canon relationships have far more interesting potential and chemistry.

It's weird to see the show pander to SnowBarry shippers. Whenever writers start to give in to a niche in their audience, trouble arises. Do we all remember what happened to Supernatural? Buffy in later seasons? Angel? I can keep going, but you get the point.

On Jan. 11, Gustin retweeted this from Orlando Jones. In an interview with Entertainment Tonight, he even insisted about Barry that, “Iris is the love of his life." Enough said.

Let me get a bit more serious for a moment. Being a part of any fandom, especially very geek-oriented ones, as a black woman is rough. You're lucky to find any representation whatsoever. So I was excited to see Iris and Joe West would be black on the show. But diverse casting in major roles doesn't amount to much when the characters aren't written properly. We've seen Cisco dumbed down for the sake of making new fan favorite Hartley Rathaway look even smarter. And we're witnessing Iris, who has been described as the female lead of the show but not treated as such, given the same treatment as Laurel on Arrow.

I'm not saying every comic book adaptation needs to be beholden to the source material, but the sidelining of Iris and inability to give her good development speaks to a larger issue of The Flash really not knowing what do with its female characters. While enjoying a crackship like Barry and Caitlin is fine in theory, to see it being given weight on the show is really disappointing. Can you tell I have a lot of feelings about this?