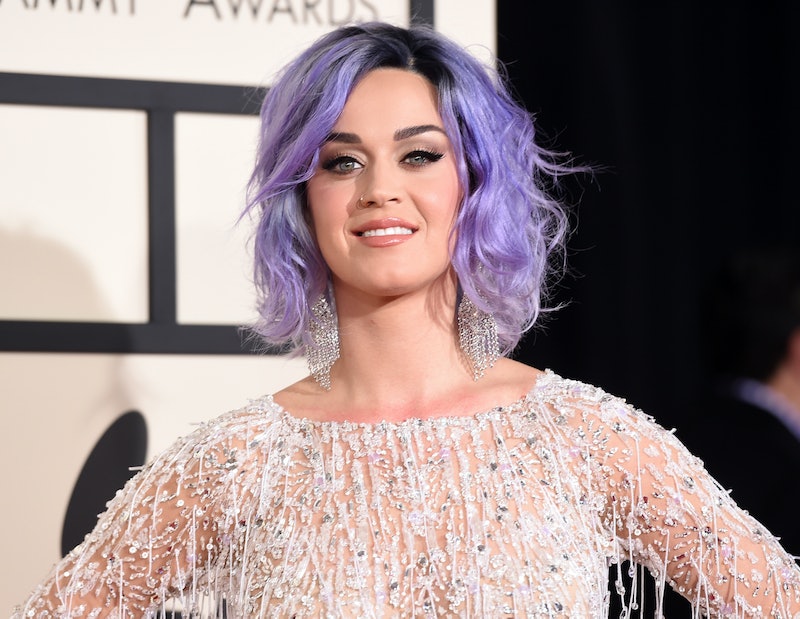 If you're like me, you've been watching the Grammys since 5:55 p.m. ET, when the various famous faces of the music industry began putting up with Ryan Seacrest's questions and women from all walks fame tried to avoid answering questions about their dresses (Nicole Kidman's "Uh, what am I supposed to say?" might have been my favorite reaction). If that's you, you might have also noticed that Katy Perry had short purple hair at the Grammys oh, about two hours ago. Did Katy suddenly grow like a foot of hair for her emotional Grammys performance? Is time moving backwards? Am I losing my pop-music-loving mind? Nope. Fear not, gentle Grammys viewer. Katy Perry's purple Grammys hair was a wig. Mystery solved.

Yep, the enviable purple hue was a perfect as the princess of purple hair, Kelly Osbourne's, but it was temporary (there can be only one, after all — believe me, I wish I could rock the lavender locks too, but I just can't). When Perry was talking to Seacrest about her recent Super Bowl performance (which was killer, and not just because of Left Shark), she admitted that her perfectly tousled coif was an illusion. Hours later, Perry was working with this look:

I'm not sure why Perry felt like she had to fake it on the carpet, but that bundle of perfection on the top of her head was the best complement to her incredible, frosty dress, so I suppose it was worth it. Now excuse me while I have an emergency consultation with my hairstylist to see if I too can rock that incredible 'do IRL.