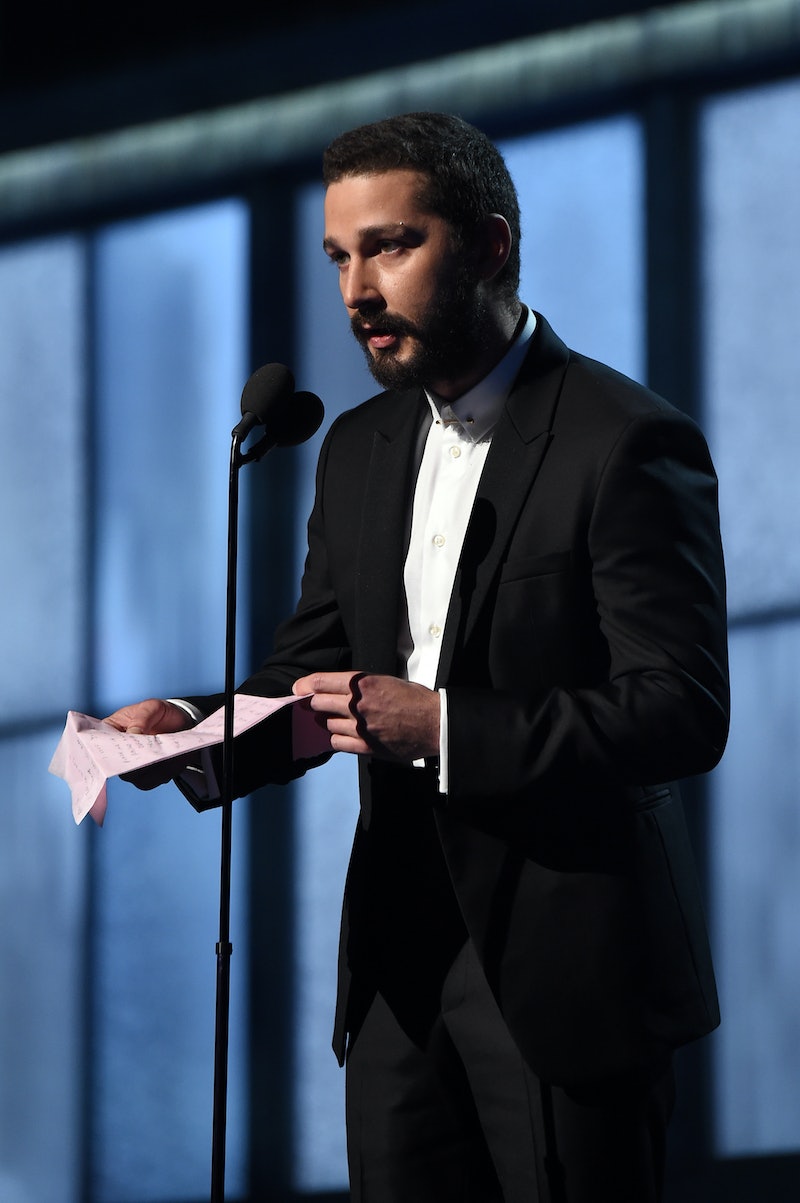 Well, the pre Grammys hyped promised a special guest performance alongside Sia on Sunday night, and although it turned out that Kristen Wiig was the guest dance performer (!!), it was Shia LaBeouf who introduced Sia, but what did LaBeouf read at the Grammys? We know that LaBeouf and Sia are — uhhh, let's go with – unconventional performers. Instead of the usual artist introduction, LaBeouf read a poem from a piece of paper before Sia, Maddie Ziegler, and Wiig (still can't believe that happened) took the stage.

(Update: According to a source who spoke with Us Weekly, the letter was, in fact, a love note from Sia's husband Erik Anders Lang. The source explained, "Erik and Shia conspired together and did this as a gift to Sia. She was COMPLETELY surprised and had no idea.")

If you were confused/excited/dreadful by the mere mention of LaBeouf's name (I admittedly was in the "excited" category), you may have missed what the actor read. Here's what he recited:

For Sia: I feel like this may be strange to say this here. I love you so. Punch me if I stop crying. I raised a white flag for you, defeated finally. If strength were made of broken pieces, you and I would always win. It is, though, and building and statues wink at us. I could squeeze you to zero. I'll never know another. What am I going to do? Punch me if I stop crying, and I'll do the same. Love, Erik.

You can rewatch LaBeouf read the poem/letter below.

It felt like LaBeouf had entered a poetry open mic night, but seriously, what was he reading? It appears to be a poem to Sia from Erik — and who exactly Erik is has yet to be revealed, but I'm betting on Sia's husband Erik Anders Lang. Sia and Lang were married in Aug. 2014 and considering the poem said he loved her so, it seems like the best assumption. (It's either him or an intense fan.) Plus, I'm sure Lang and Sia share similar artistic sensibilities since they are married and he's a filmmaker.

Oh, leave it to Sia and LaBeouf to be so unique (and cryptic) at one of the most mainstream events in all of music history. How I adore them.