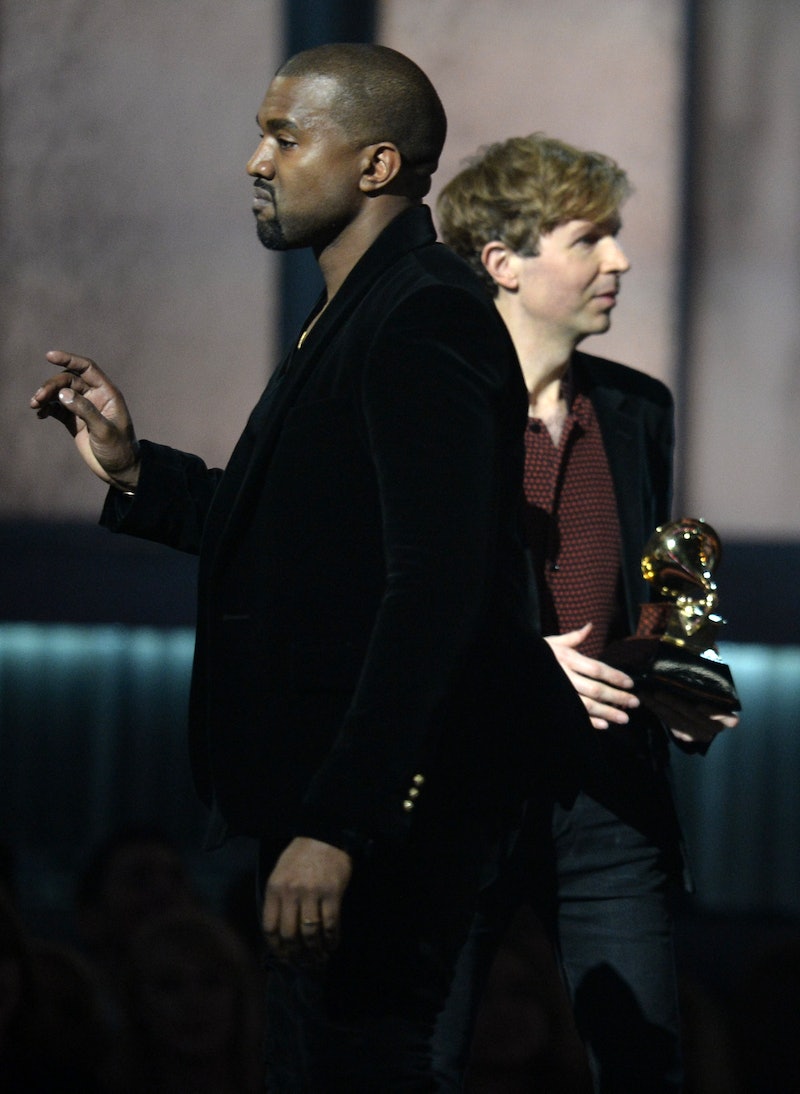 The 2015 Grammy Awards have been a real roller coaster of emotions. From excitement to disappointment, laughter to utter boredom, Sunday night's ceremony has been all over the place, but there's one sequence of events that truly stands out for going from one extreme to the other. First, an extreme low point: Beyoncé lost the Album Of the Year Grammy to Beck, which was completely shocking. But just when I thought I had fallen into a pit of emotional despair I could never crawl out of, Kanye West appeared on the Grammys stage, apparently to recreate his infamous moment from the 2009 VMAs when he interrupted Taylor Swift's acceptance speech and took the microphone to proclaim that Beyoncé should have won.

For a second, it seemed that's where the night was heading, despite West having previously apologized for the incident with Swift. However, something even better happened. West poked fun... at himself. The rapper is known for taking himself and his music very seriously — as he should, he's got a lot of talent and there's nothing wrong with being intense when it comes to your craft — so what came next was very surprising. West walked on stage as Beck accepted his award, appeared to reach out for the trophy for a moment, then slightly waved his hand at the award, turned around, and walked off stage. Watch the exchange below.

West totally made fun of what happened in 2009, and managed to be funny without actually taking any attention away from Beck. It seems West fooled not just us watching at home, but his famous friends in the audience. Watch Beyonce and Jay Z's perfect reactions to West taking the stage below.

You can see the terror in Jay Z's eyes before it's quickly replaced by sheer delight. Just when I thought West couldn't top his amazing performance of "Only One," he comes out of nowhere with this bit. Sam Smith may have cleaned up on Sunday night when it comes to award wins, but to me, West was the clear winner of the 2015 Grammys.