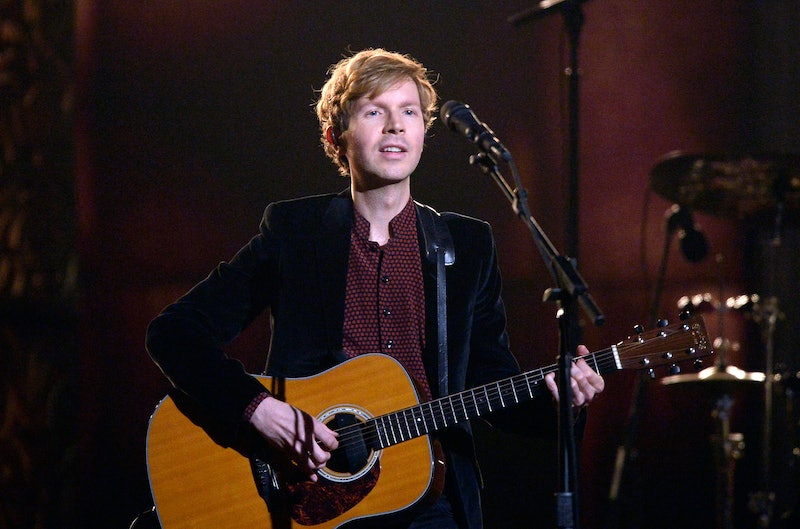 I know that the whole "I'm old" thing is kind of, well, old, when it comes to looking at how many youngins these days are treating '90s fashion trends like they're vintage or that "Retro MTV" series where they play old episodes of Laguna Beachlike that show happened soooo long ago. But, that said, it cannot be denied how many "I'm old" moments there have been in the past couple of weeks in regards to music. The most recent of which is Grammy viewers not knowing who Beck is. "Who Is Beck" trended on Twitter. How do people not know who Beck is?! "Loser"? "Where It's At"? To use the lingo of our current times: I can't with this.

When Beck won the Grammy for Album of the Year, people were shocked (including Kanye West). And, even as a fan of Beck's music, I was shocked too. Dude was up against BEYONCÉ. And Sam Smith (who won FOUR Grammys Sunday night). And Pharrell. And Ed Sheeran. These people are a big deal in pop music right now. A win for Beck was most definitely a surprise, but even more of a surprise was people not knowing who the heck Beck is.

The thing is, you don't have to be Beck's age, 44, to know who Beck is. I'm 25, and while my last name does make me partial to him, I don't know his songs because I was of music buying age when he had his biggest hits. I was SEVEN when "Where It's At" came out, but by age 15, Odelay was one of my favorite albums. Plus, everyone just knows "Loser," right? Wrong. Oh. So. Wrong.

This reminds me of the recent news of people thinking Paul McCartney was a new musician that Kanye West was putting on the map. PAUL MCCARTNEY. THE BEATLE. What?!

If you wanna feel "old," or perhaps better, "confused about the world," check out some of the tweets below. People don't know who Beck is. It's weird.