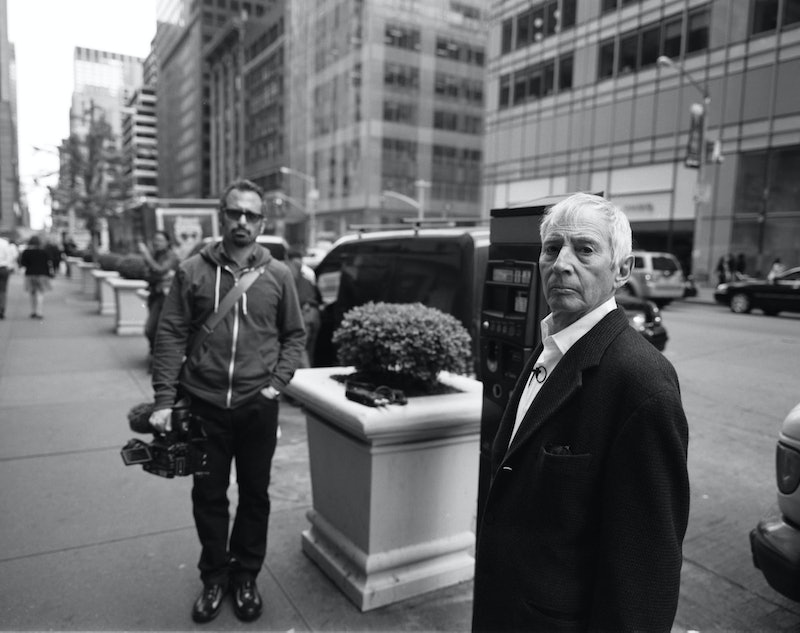 HBO has given their new documentary series, The Jinx, the golden treatment. Rather than airing it on Mondays or Saturdays, it's the newest part of their prestigious Sunday night block. And the reason is that The Jinx is like Serial , a true-crime documentary about unsolved murders and a suspicious set of circumstances that suggest a mystery that will be catnip to the obsessives who pored over every detail of the Nisha call or the Best Buy parking lot.

But even though both stories are shocking, Robert Durst has basically the inverse story of Adnan from Serial. Robert Durst is an eccentric New York socialite who has had several close brushes with several different murders, but was never convicted of any homicides. Serial took great pains to establish that the criminal justice system made it difficult for young Adnan and his family to pursue every avenue that could have gotten him acquitted, from failing to get an alibi or taking bad advice and not testifying. Whether or not he's guilty, the trial did not seem to prove beyond a reasonable doubt that he committed the crime. But setting up Adnan (or, in The Jinx's case, Robert) as a victim of either bureaucratic failure or bad luck ignores the actual victims of these crimes — the people who were murdered.

The biggest difference between the two is, of course, sight. Seeing the grisly nature of the murders, with glimpses of disembodied legs, arms, and torsos sticking out, instantly makes the murder more vivid on The Jinx. I'm sure, however exploitative it would be, that if there were photographs of the deceased Hae Min Lee spliced into each Serial episode, that there would be a great deal more people calling for Adnan's head. And one of the biggest criticisms of Serial was that Hae never became much more than an object, a prop in Adnan's story. A large part of that was because Hae's family didn't want to be involved, especially once the podcast took their private suffering and turned it into a pop culture object. And when Jay didn't want to be interviewed, audiences immediately jumped to calling for his blood, to the point where he felt forced to speak out because crazed Serial fans were intruding on his life.

Hopefully that shouldn't be a problem with The Jinx. While the first episode mostly focuses on the Galveston police and their investigation, the documentary was made over a period of years with enthusiastic participation from Durst and other members of his family, and people he's interacted with, many of whom believe Durst is guilty.

The genre has done some good — you can't forget that Errol Morris' The Thin Blue Line provided enough evidence to eventually free Randall Dale Adams. And if Adnan Sayed is innocent, then Serial could have helped draw enough attention to his case to help him win the appeal he was just granted. But I have to admit, it's hard to be "a fan" of the true crime genre, because its exploitative elements cannot be denied. And since so many unsolved crimes victimize women; this kind of storytelling crosses over to treating them as props far too often. There was a lot of time in The Jinx spent on Robert's two wives, and hopefully further episodes continue to flesh them out as people. Hae never really got that luxury with Serial.

Ultimately, the biggest difference between Serial and The Jinx is that The Jinx isn't over yet. It's impossible to judge it before we see all of Jarecki's vision, and, as we've seen already, the show is constructed in order to maximize the shock at just how many strange occurrences have happened to Robert Durst.