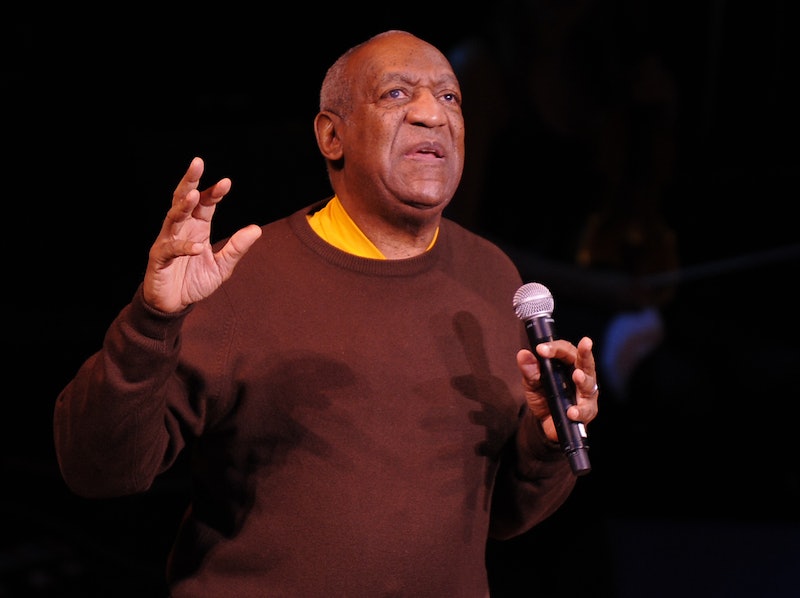 Things have been quiet on the Bill Cosby front for a little while now, allowing the world to turn some of their attention to things like the 2015 Grammys and the diversity controversy surrounding the 2015 Oscars. However, the world has not forgotten the sexual abuse charges leveled against Cosby by over 30 women... and another woman has come forward to add her voice to those of the other victims. Fashion model Helen Gumpel née Selby revealed on Sunday that Cosby made sexual advances toward her when she appeared on The Cosby Show for an episode in 1988 and her story, though different from the rest, follows a pattern that is becoming disappointingly and disturbingly familiar in this case.

According to Gumpel, she was brought to the show's set for what she thought was another audition and was instead taken to Cosby's dressing room. There, he asked her to sit down and then handed her a drink before "[standing] in front of her with his crotch in her face." This revelation came at a news conference Gumpel held in downtown Boston on Sunday mere hours after Cosby cancelled his shows in Boston officially due to weather and allegedly due to protestors. According to Gumpel, "I never thought of myself as a victim because I refused his advances. But my career was a victim."

There has been no response from Cosby or his lawyers regarding this latest accusation, but the only real surprise in this situation is how unsurprising it's becoming for there to be another woman coming forward to accuse Cosby of some kind of sexual misconduct toward them. Despite the fact that Cosby likely will not go to court to answer for these accusations, the voices of over 30 women can no longer be swept under the rug the way that they have been for years. Each narrative told by these women who were all strangers to one another prior to the public outcry builds a view of a man very different from the beloved TV father that still has diehard friends, co-workers, and fans defending him even now, but to discredit these narratives as completely groundless does a gross disservice to the victims.

The official statement with regards to all accusations against Cosby so far remains the same: "Over the last several weeks, decade-old, discredited allegations against Mr. Cosby have resurfaced. The fact that they are being repeated does not make them true. Mr. Cosby does not intend to dignify these allegations with any comment. He would like to thank all his fans for the outpouring of support and assure them that, at age 77, he is doing his best work. There will be no further statement from Mr. Cosby or any of his representatives."