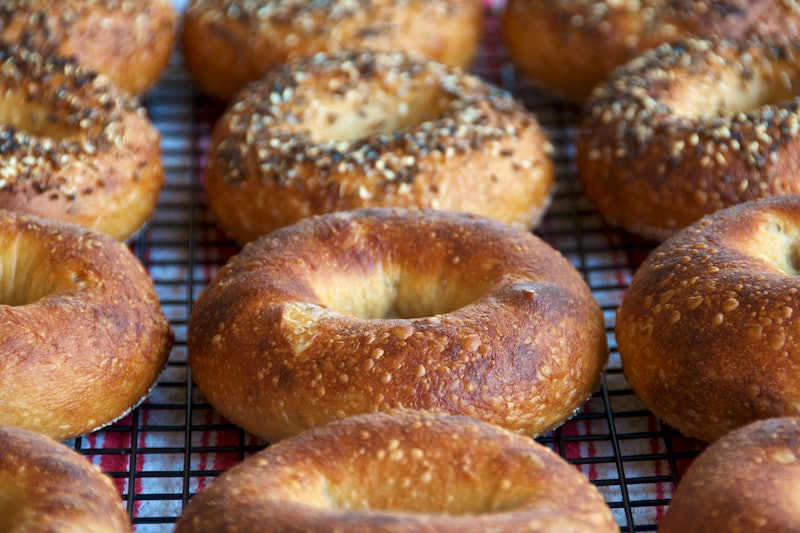 Among all the Valentine's Day preparation, people have all but forgotten about a holiday that is far more important and inclusive — National Bagel Day. Celebrated on February 9, the holiday gives us an excuse to feast on these doughy delights for breakfast, lunch, and dinner (not that we actually needed one.)

Like most holidays, everyone honors this special day in different ways. Some may score a free bagel and top it with a little lox. Others may turn their pastry into a pizza. And a select ambitious few may even attempt to make their own cragel. No matter how you decide to slice or schmear your bagel, this day is bound to be delicious.

But even those who celebrate National Bagel Day every day of the year can be a bit naive when it comes to the history of this worldwide delicacy. In fact, I'd bet a baker's dozen that most people don't know where this tasty treat came from (no, not an oven). In honor of National Bagel Day, here are 12 factoids to share with friends as you stand in line at the nearby bagel shop. Because shouldn't this holiday be about eating and educating? Exactly. We thought so too.

Though the origins of the beloved breakfast item have been debated for years, most historians say the bagel made its debut in Poland in 1610, when the Jewish Council of Krakow issued regulations regarding how families were allowed to celebrate a child's circumcision. But the baked good did not become popular in the United States until the 1960s, as the result of Americans’ growing interest in Jewish culture.

Derived from the Yiddish word beigen, which means to bend, a bagel is a "leavened, doughnut-shaped, firm-textured roll, made of dough that is first poached and then baked." And yes, there is a correct way to pronounce it — bay-gul.

3. It's also a common tennis term

4. There's a reason for the hole

No, it's not to deprive you of chewy, carb-filled goodness. It was so the original vendors could thread the pastry onto a dowel, which they would then carry around the town so they could sell bagels to hungry street goers.

5. The bagel became even better when cream cheese came along

Though families had been making schmears for a while, William A. Lawrence was the first to mass produce the tasty spread in 1875.

6. Despite the myriad of flavors, plain remains the most popular bagel choice

Because, why mess with the original?

7. Over the years, poppy bagels have been given a bad, drug-related rep

Many people believe that eating a poppy bagel causes a positive drug test. Though scientists admit that poppy seeds can absorb opium extract from the pods, they say it would take a lot of bagels to alter your test results.

8. But there are some bagels that can give you a buzz

In 2007, North Carolina scientist Robert Bohannon created the Buzzed Bagel, a pastry that contains the caffeine equivalent to two cups of coffee.

...is at home. New York adds an 8 cent tax to any bagels that are sliced, toasted, or served with a spread. Not to mention the bagels aren't cut properly.

10. To find the world's largest bagel, travel to Syracuse, N.Y.

Well, you may only find the crumbs now. The Guinness Book of World Records reports that Brueggers Bagels set the record in 2004, creating a pastry that weighed 868 lbs and measured six-feet in diameter.

11. New York City is home to the most expensive bagel...

Yes, New Yorkers think everything about their city is better. But they are right when it comes to their bagels. The mineral content in the water, combined with the fermentation process creates the chewy, crispy texture that makes NYC bagels the best in the world. Don't believe us? Take a trip and find out for yourself.