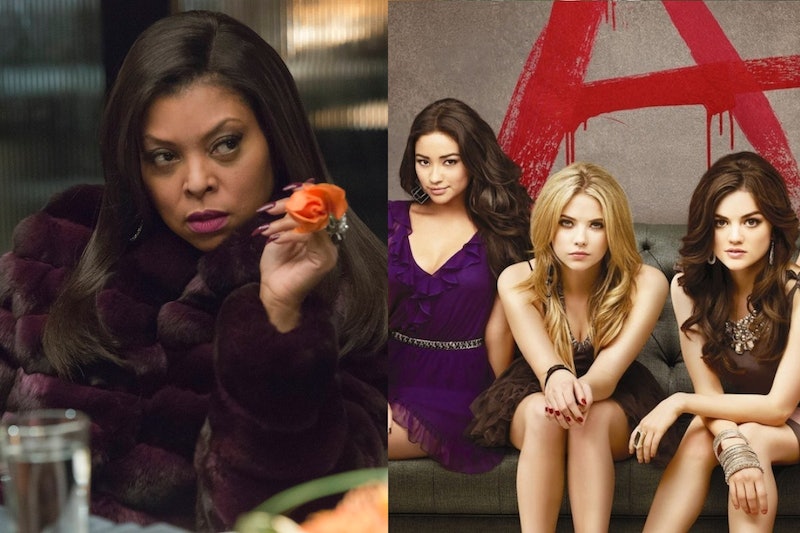 Speaking as someone who loves television to an almost unhealthy degree, I’ll freely admit that I’m always up for a good crossover opportunity. I mean, what could be better than allowing two of your obsessions to collide? Which is why I was extremely intrigued to discover that this week’s episodes of Pretty Little Liars and Empire are both titled “Out, Damned Spot.” Now, those of you familiar with Shakespeare’s Macbeth will recognize this famous line as belonging to Lady Macbeth, who becomes so consumed with guilt over King of Scotland’s murder that she begins seeing imaginary blood stains on her own hands. A “spot” on her soul that can never be removed.

So what does all this have to do with these two shows? Well, according to this week’s promo, our Liars will find themselves once again backed into a corner when “A” gets ahold of their blood, which could be used to frame any one of them for Mona’s murder. That would be hard stain to wipe from their record, indeed! As for Empire , we know Lucious already has some blood on his hands that he’ll have to contend with now that the police are closing in on what really happened to poor Bunky. Seems to me like both shows will be having their hands full of drama.

And while an actual crossover may be just wishful thinking (especially since they’re on two different networks), I thought it would be fun to ponder what something like that would look like, given how much both shows have in common. For example…

There Would Be Sass

I mean, just picture Cookie's reaction if "A" started sending her cryptic text messages. There is no way she would tolerate such high school-ish threats. (Seriously, this lady is not to be trifled with.) Her epic one-liners would be enough to make even the likes of "A" cower in fear — guaranteed.

A Ton Of Deception

One of the biggest things these two shows have in common is the fact that everybody has secrets. The question is, though, how long are they able to keep them hidden? Just as Mona's murder is at the forefront of these Little Liars' minds, both Lucious and Cookie have one or two deaths to contend with of their own. And that's not including Mr. Lyon's biggest secret of them all: his ALS diagnosis. Just imagine if these two lying parties would to team up. Between Empire's financial backing and PLL's experience in the art of deception, there's no telling what they'd be able to accomplish.

The outfits alone should be enough to convince any network to make a crossover happen. (Aria and Cookie could trade leopard ensembles!) Please, let me live vicariously through their incredible wardrobes. I beg of you.

Lucious and Cookie may not be together right now, but that doesn't mean I don't expect their undeniable chemistry to eventually lead down a very complex (and possibly dangerous) road. But if it's anything like some of the love stories PLL has concocted, it's bound to be worth the wait. Plus, you just know they'd make the perfect double date partners for Caleb and Hanna. Let's make this happen, shall we?

An Empire Of Followers

Empire may only just be starting out, but its ratings have been off the charts pretty much since Day 1. And PLL fans are a well established bunch that dominate the interwebs on a daily basis. Now just imagine combining all of that star power. Forget Kim Kardashian, THIS is how you break the internet.

And, Of Course, Murder

Because you can't have a good drama without a little bloodshed every now and then.