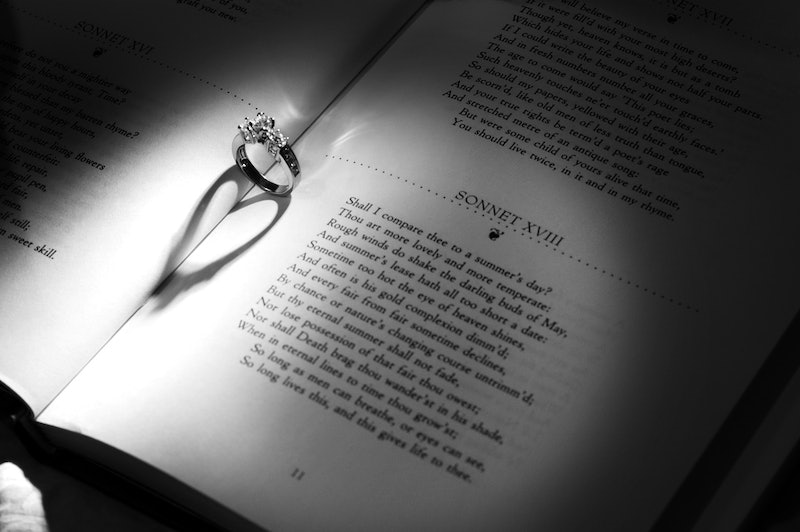 Sexts can come in variety of forms, some of which are preferable to others. One OKCupid user, however, may have just penned the greatest one the world has ever seen: He wrote a woman with whom had been corresponding an entire sext… in the form of a sonnet. It wasn't unsolicited either, so he gets bonus points for not just sending her a sexy sonnet out of the blue. Stand aside, random dick pic senders of the world; you've just been schooled.

This magical piece of online flirting was submitted to the r/OKCupid subreddit last night by a fellow going by the name of Topical_Aphorism. According to Topical_Aphorism, who appears to be a 23-year-old dude from the Toronto area (or at least, that's what his Reddit flair is telling me), the woman in question's profile specifies that she only accepts sexts in iambic pentameter. He proved himself to be more than up to the challenge by sending not just a few lines of verse, but an entire sonnet. Not bad, eh?

If your knowledge of sonnets is buried way back in your memories of high school English, allow me to give you a brief primer (but of course, feel free to skip ahead if this is all old hat to you): There are a couple of different types, but the one you're probably most familiar with is the one that Shakespeare used. It consists of 14 lines divided up into three quatrains — three groups of four lines — finished off with a couplet. It follows this rhyming scheme:

Shakespearean sonnets also employ a particular meter called iambic pentameter (as specified by the gal with whom this OKCupid user was speaking) — which, again, you're probably most familiar with thanks to the works of William Shakespeare. I'll spare you the gory details of what an iamb is and whatnot, but iambic pentameter boils down to this: Each line in the poem has a total of 10 syllables, with every other syllable getting a little extra emphasis. Think, “Shall I compare thee to a summer's day?”

Got it? Good. Now, with all that in mind, here's what Topical_Aphorism sent to the lady he was wooing:

This? This is the best. And I bet it probably resulted in one heck of a conversation, too. Take note, online daters of the world: If you really want to capture someone's attention, that's how you do it. It only takes a send to type something like, “Hey, you look nice! Want to chat?”; taking the time to write something like this, though, shows A) that he actually read her profile, and B) that he's not just spamming every user on the site. It's funny, it's witty, and it's smart. Well played, Topical_Aphorism. Well played, indeed.

While we're on the subject, it's not actually that difficult to make your online dating messages memorable; there are plenty of ways to do it, and they only take a few extra moments of your time. Here are a few to start, but by all means — go ahead and unleash your creativity!

Is one of their profile pictures posed in front of the Colosseum? Ask them about places they've traveled. Is one of their favorite books also one of your favorite books? Ask what they thought about a similar work. Demonstrate that you read their profile — you can always tell who's genuinely interested in getting to know you because they find your profile interesting vs. people who just message everyone in the hopes that someone replies.

2. Riff off of their interests in some way, shape, or form.

Personal anecdote time: I met my lovely SO on OKCupid way back in the day. I was in drama school at the time, so I was neck deep in theatre pretty much all day, every day; he, on the other hand, had absolutely no working knowledge of theatre — BUT, he actually took the time to structure one message (well, it was more like a letter — we corresponding for a while before finally meeting up) as a three-act play. It was adorable, and it definitely made an impression on me.

I'm amazed at how frequently this tip (which should really be a rule) is completely thrown out the window. Do unto others, right? Behave. Also don't call someone a bitch just because s/he didn't respond to your message 30 minutes after you sent it. In fact, don't call anyone a bitch (or an asshole, or any other unpleasant word) at all. Seriously. Just don't do it.

The beauty of the sonnet is that it is by nature a short poem. A wall of text for a first message probably won't get much of a response; a few well-chosen sentences, however, probably will. While we're still knee-deep in Shakespeare, let's remind ourselves that brevity is the soul of wit.