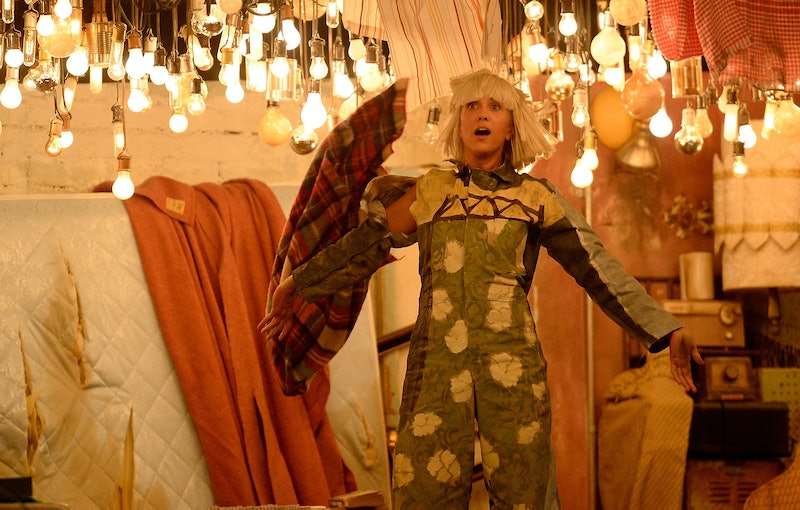 When Kristen Wiig danced to "Chandeller" during the Grammys, everyone freaked out. It wasn't just because she was incredible alongside Dance Mom's Maddie Ziegler, but because it was so unexpected. We've seen her shimmy and shake before — even dancing with Harry Styles! — but nothing at this level. From her fun sketches on Saturday Night Live to some singing and dancing in movies like The Secret Life of Walter Mitty and The Skeleton Twins, Wiig has actually been wowing us for years. Apparently she's flown under the radar with her impressive voice and killer moves, but I'm here to remind you of all of the great things she's done so far.

To celebrate her latest foray into dance and remember how much we miss her on SNL, check out 11 times that she sang and danced her way into our hearts through the years. Sometimes it was weirder than others (i.e. a The Sound of Music Live! parody that felt more like American Horror Story) and many times it included star-studded friends like Amy Adams, Darren Criss, and Ellen DeGeneres. This funny lady is now a triple threat, and I'll be waiting for her to make a Bridesmaids sequel that is a full-on musical next.

Dancing With Harry Styles At An SNL After Party

It was to "Time of My Life" from Dirty Dancing , of course.

Butchering One Direction's What Makes You Beautiful"

Even though she was pretending to be Harry Styles on The Tonight Show with Jimmy Fallon, she didn't know the words to the teen star's hit song.

It was still beyond epic, though.

Kind Of Getting Backstreet Boys Lyrics Right With Darren Criss

They were put on the spot by "Everybody."

In "Let's Duet" from Walk Hard: The Dewey Cox Story, it's Jenna Fischer who sings with Reilly, but during a live rendition in NYC, Wiig joined him instead.

Singing "Space Oddity" In The Secret Life Of Walter Mitty

What happens when you put together David Bowie and Kristen Wiig? Magic, that's what.

This parody of The Sound of Music Live! has Wiig's creepy character, Dooneese, cut from the show. She sings lines like "Ti— a drink that comes from the toilet."

Her Tearful SNL Goodbye To "She's A Rainbow"

I actually cannot watch this without crying. The Rolling Stones classic is the soundtrack to Wiig dancing and singing along with her co-stars of past and present.

This one has more laugh-crying than real crying. And plenty of festive cheer!

And Lastly, Epic Lip-Syncing in The Skeleton Twins

This isn't really a spoiler, so you can watch without seeing the movie. You will never listen to Starship's "Nothing's Gonna Stop Us Now" the same way again.