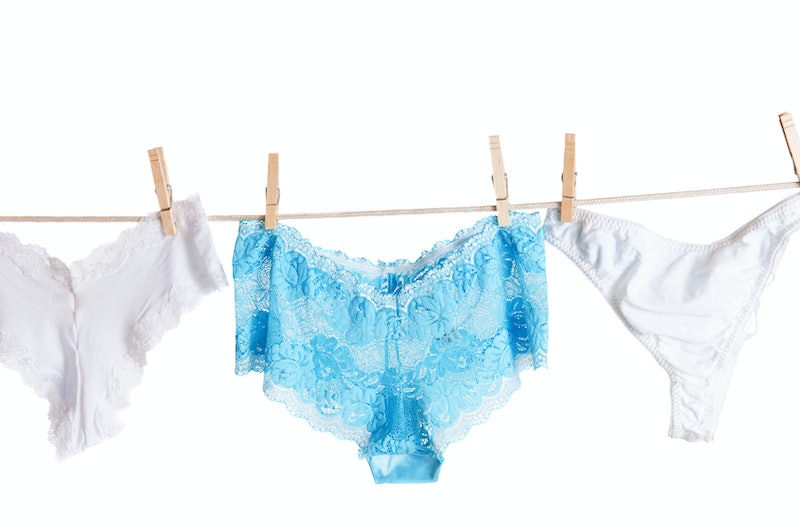 I've seen some strange online ads (remember the guy who turned to Craigslist looking for a fake family?), but this one just might take the cake: Mother of three Sandra von Reikhoff sold a lingerie set on eBay Craigslist she'd gotten from a married man 15 years ago. That already sounds like TMI for a listing, but just wait — you'll have to read the whole ad to fully grasp its craziness. If you're looking to resell some clothing online, read on; von Reikhoff, whether intentionally or unintentionally, has given us all some great pointers on how not to use eBay — or maybe on how to make the most of it. You be the judge.

The listing starts off with no holds barred. It reads, "Thank you for looking at this piece of smutty lingerie. I have worn it only while drunk. It looks ridiculous otherwise. Try standing with it on, flat foot in broad day-light. It appears desperate." I mean, I know you shouldn't over-hype a product, but this is really bsomething else. Does she actually want anyone to buy the lingerie? Unclear.

Questionable saleswomanship aside, though, von Reikhoff uses the ad more as an opportunity to tell her story than as a serious listing. She continues, "This piece of wasted time really only pleases the designer who made it. It was sold for 400 pounds to a 40 year old man 15 years ago who clearly suffered from an expensive mid-life crisis."

And it gets better as she admits:

"I have shoved this and several other items as listed above in the attic hoping the guilty memories would fade. They don't. I feel rotten for betraying his wife and accepting these gifts, even if she was as rancid as he claimed. Fast forward 15 years...I'm 40 now and have 3 kids. She was probably doing her best. What 40-year-old woman is still a wildly fun ride with her husband after multiple children?"

In some ways, it looks like von Reikhoff is using her listing as a cautionary tale, hoping other women don't make the same mistakes she did. If, at this very instant, you are being courted by a wealthy married man who promises to shower you with designer gifts, you might want to reconsider; it seems that money doesn't buy happiness. Or, it doesn't pay to cheat. Or, if you cheat, you'll pay the price. And so on and so forth. Von Reikhoff told The Daily Mail that the man's wife did discover the affair and even went so far as to contact her — which ended up being her wake up call to end the whole thing. At least there's that, right?

Von Reikhoff said that all the proceeds she gets from selling her goodies will help her fund a startup app to help people find — you guessed it — good underwear. But I think that if nothing else, this listing demonstrates that she should look into being a romance novelist. You can read her full-length novel (AKA the entire post) here.

I will say that as someone who regularly peruses Craigslist and eBay from time to time, this ad is one of the stranger ones I've come across. But if the Internet has taught me anything, it's that you should never underestimate how weird people can be. I've rounded up what I think are five of the weirdest Internet ads, just to put this one in perspective a bit.

This (unfortunately) actually happened — a woman auctioned off her used breast implants on Ebay.This is so gross I'm having trouble processing it. I can only imagine the weirdo who purchased them.

2. The Guy Looking for a Nemesis

Some guy, somewhere needed more excitement in his life, so he turned to Craigslist to find an arch nemesis. He was looking for someone to "steal my parking space, knock my coffee over, trip me when I'm running to catch the BART and occasionally whisper in my ear 'ahaha, we meet again.'" You know, totally run-of-the-mill stuff.

3. "Awkward Date With a Weird Guy"

With an ad like that, how could you possibly say no?!

4. A Collection of Belly Button Lint

The seller said he would trade his collection of belly button lint for "[a] muscle car, [a] Harley, rifles, gold coin work or make cash offer." What a steal.

1. A Hamster Wheel Fit for Humans

Yeah... I really hope the seller of this human-sized hamster wheel was reported to the police...*cough cough* serial killer.