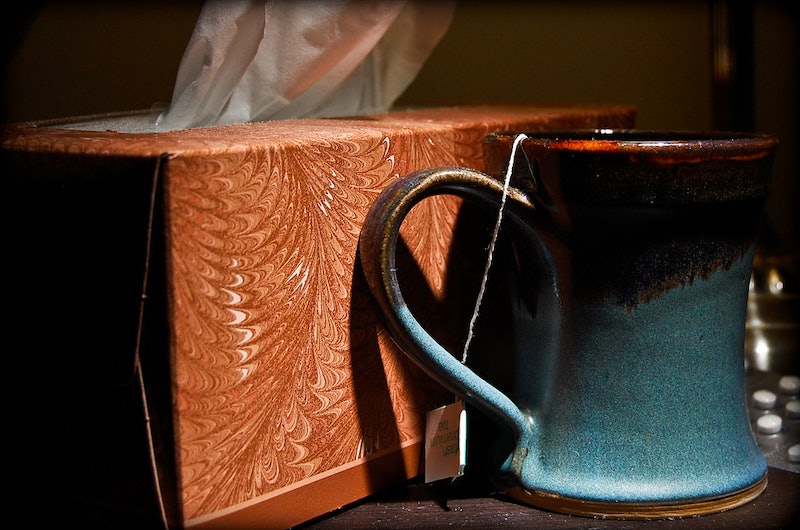 Flu season is far from over, so in case you're worried you might fall prey to its gross, congested embrace, here — have a few cold remedies that actually work. The good folks at ASAP Science did a little digging to see how many commonly-cited home remedies were actually backed up by science; then they assembled their findings into a hand-dandy video. The good news? Your kitchen is probably already stocked with a few things that have been proven to work. Break out the chicken soup and the orange juice — and don't forget a little tipple of bourbon while you're at it!

It's worth noting that while remedies like these ones can do help your body either ward off sickness or do battle with it once its already gotten you into its germ-y embrace, they're not miracle cures; as such, you probably shouldn't rely on them to whip you into shape within minutes if you start feeling under the weather. The Internet is no substitute for an actual doctor, so if you've been feeling hideous for more than a day or two, go get yourself checked out. Oh, and also? Stay home from work. Getting everyone else sick isn't going to help matters.

That said, though, if you think you might be coming down with something, you might want to add a few of these tidbits to your menu plan. Better safe than sorry, right? Scroll down to watch the whole video!

Chicken soup has anti-inflammatory properties; as such, it can help relieve congestion. The old saying of “feed a cold, starve a fever,” however, is inaccurate; in both cases, you should be eating nutrient-rich foods like fruits, veggies, and proteins — no junk food! This will help your body maintain the energy it needs to ward off the infection.

It turns out it really does keep the doctor away — to an extent. Obviously eating a lot of apples won't make you immortal; it will, however, help prevent cancer and heart disease, thanks to the fruit's anti-oxidants and flavonoids.

Vitamin C may not actually prevent you from getting a cold — but it might help lessen the duration of a cold once you've already gotten sick. Go eat an orange and squeeze some lemon into your tea.

Honey, which is well-known for its powers as an anti-bacterial, increases the releases of inflammatory cytokines — which, in turn, signal your cells to repair themselves. P.S. The anti-bacterial properties of honey aren't just good for the inside of your body; they're good for the outside of it, too. If you've every wondered why so many DIY face masks have honey as an ingredient… well, now you know.

Studies have found that moderate amounts of alcohol can help boost your immune system. Obviously this doesn't mean that getting dancing-on-the-table will magically chase your cold away (indeed, studies have also found that heavy drinkers tend to have weaker immune systems) — but you can feel free to go ahead and make yourself a hot toddy.