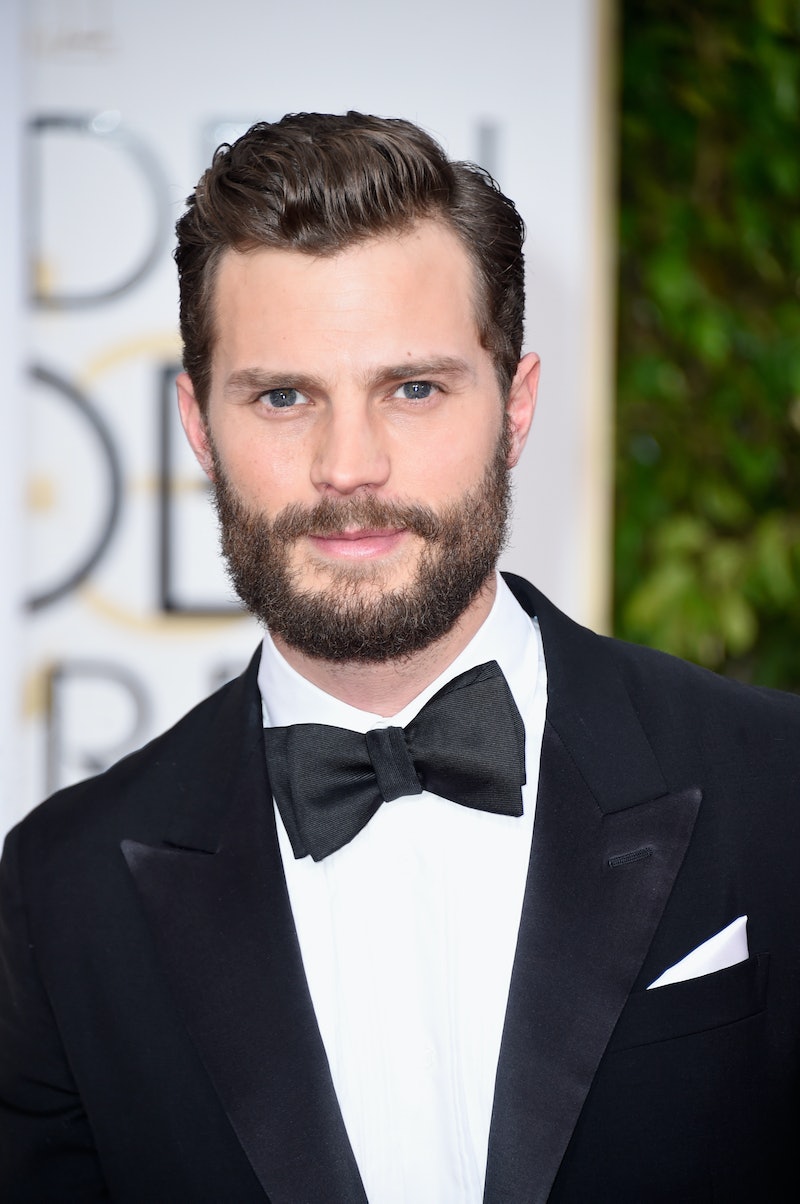 It's sad, but it happens. Sometimes, actors who take on huge franchise roles aren't a big fan of the movies they're in. The most notable example of this is Robert Pattinson, who clearly loathes Twilight and has made it obvious he regretted taking the role of Edward Cullen since the minute he said yes. And now, with all the recent press Jamie Dornan's been doing for Fifty Shades of Grey, it's clear he's caught a case of the Rob Pattinsons. If he's not looking bored and like he wishes he was somewhere else in every interview he's done promoting the film, he's outwardly mentioning how unrealistic it is. Now, we're presented with a very important question: Does Jamie Dornan hate Fifty Shades of Grey more than Robert Pattinson hates Twilight?

Pattinson's loathing for everything Edward and Bella related is pretty insurmountable — not to mention hilarious — so it's hard to believe that Dornan could win this particular race. The only way to know for sure? Make the comparison. They're not so different, Dornan and Pattinson. Both play leading men inspired by something that happened in a dream Stephenie Meyer once had, and neither male character is necessarily an example of "the perfect guy" the books and movies' devoted fans seem to think they are. Maybe these guys should be friends?

Just in watching the video above, it's easy to see that there are few things in life Pattinson hates more than he hates Twilight. He thinks the characters are insane, he says the book reads like something that was never meant for anyone else's eyes, and when filming was over, he was practically ready to throw a party. He dislikes the franchise so much that he doesn't seem to understand his fans whatsoever, and once said he often asks himself "what these masses of people do all day."

He also really, really can't stand Edward Cullen — not that I blame him, as I usually agree with every point he makes about Twilight.

When you read the book, it's like, "Edward Cullen was so beautiful I creamed myself." I mean, every line is like that... I was just convinced that [Stephenie Meyer] is mad, she's completely mad, and she's in love with her own fictional creation... [Edward is] the most ridiculous person. The more I read the script, the more I hated this guy. Plus, he's a 108-year-old virgin, so he's obviously got some issues there.

The man I am seeing on Fifty Shades' press tour is a man filled with regrets. In interviews like the one above, he's awkward, visibly uncomfortable, and doesn't even appear to be having fun with Dakota Johnson, who you'd think he'd be BFFs with by now after all those crazy, mostly naked situations they've been forced into together.

And when Dornan is asked to talk about Fifty Shades? Occasionally he'll stand up for the movie and insist that everything sexual is consensual, but once in awhile, he'll throw us a gem like this one from a Details magazine interview:

I almost don't want to put this out there into the ether, but I fear I'll get murdered, like John Lennon, by one of those mad fans at the premiere. Because a lot of people are very angry that I'm playing this character. And I'm a father now, and a husband. I don't want to die yet. And when I do get murdered, people will say, "God, isn't it haunting how he did that interview in Details magazine and predicted his own death on the red carpet?"

Dornan and Pattinson are one for one on not wanting anything to do with their own fans, huh? Dornan's also spoken out about how he really is nothing like Christian Grey, especially in the sack.

Some of the Red Room stuff was uncomfortable. There were times when Dakota was not wearing much, and I had to do stuff to her that I'd never choose to do to a woman.

Sorry, Dornan, but I'm going to have to hand this one to Pattinson. A good time to revisit this debate is after the two Fifty Shades sequels have happened, and then Dornan will be about where Pattinson is today. Strap in, buddy — there's a whole host of adventures and awkward interviews awaiting you.