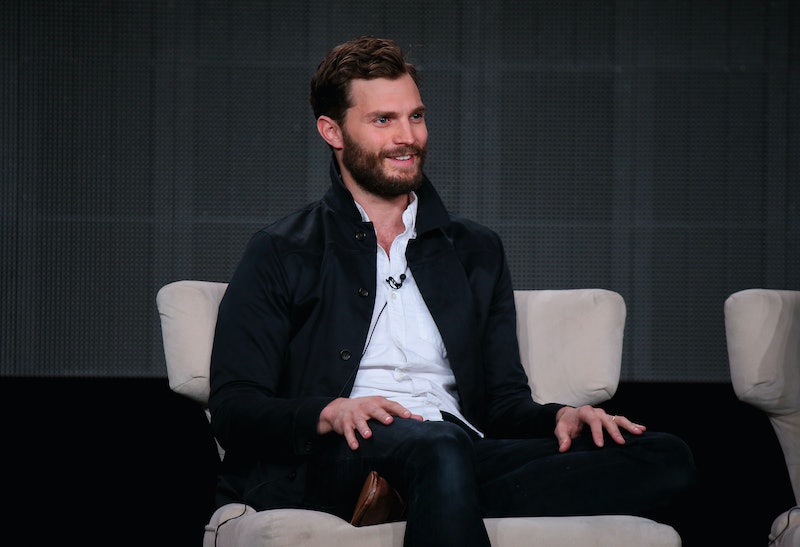 The star of the already notorious Fifty Shades of Grey (he of course plays the titular Grey, first name Christian), has been a star in press tours and interviews too, always answering questions with a spectacular display of awkwardness. In fact, the stiffness and palpable lack of chemistry between Jamie Dornan and costar Dakota Johnson has many of us asking, can they just absolutely not stand each other?

Their possible mutual loathing aside, though, Dornan has sparkled on his own as the weirdest interview ever. In a recent Twitter session where fans could ask Dornan questions directly, one asked if the movie would "give her a 'big ol' boner' the way The Fall did," Dornan tweeted back: "Bigger than you know how to handle." DAMN DUDE. This one's a classic.

But it doesn't stop there! In this cringe-worthy, deadpan interview that he and Dakota Johnson gave to the iPad correspondents from Glamour, Dornan had the following "sexy" insights: he thinks sexual enjoyment from vacuum cleaners is super weird (did not know this was a thing), he's never been on a date, and the only thing he has in common with Christian Grey? "Feet." I could watch this man struggle uncomfortably through interviews all damn day.

But hey, just because he's a little shifty and monotone when he's doing interviews doesn't mean that the man didn't research his role in Fifty Shades of Grey. Unlike Dakota Johnson, Dornan made the bold decision to visit a (dun-dun-dun) SEX DUNGEON before filming began. His response was utterly and completely immature, and also... confusing: "“I went there, they offered me a beer, and they did … whatever they were into. I saw a dominant with one of his two submissives. I was like, ‘Come on, guys. I know I’m not paying for this, but I am expecting a show.’" The man can't even say whatever he meant by "whatever they were into." He also later said in the interview with Elle UK that he went home and took a long shower before he touched either his wife or his newborn child, because sex, even just watching it, is icky!

But maybe I shouldn't be so hard on Dornan. It can't be easy to be at the center of a phenomenon with all the pressure of living up to a beloved and swoon-worthy literary character like Christian Grey. And the shackles of fame have shaken Dornan even before the premiere of the film. He divulged his fears to Details Magazine, saying: "I almost don’t want to put this out there into the ether, but I fear I’ll get murdered, like John Lennon, by one of those mad fans at the premiere." He probably shouldn't have put it out into the ether, but props, I guess, for his bravery...? Hopefully he will be more charming on screen, but honestly, his blank-stared middle school boy thing is sort of winning me over.