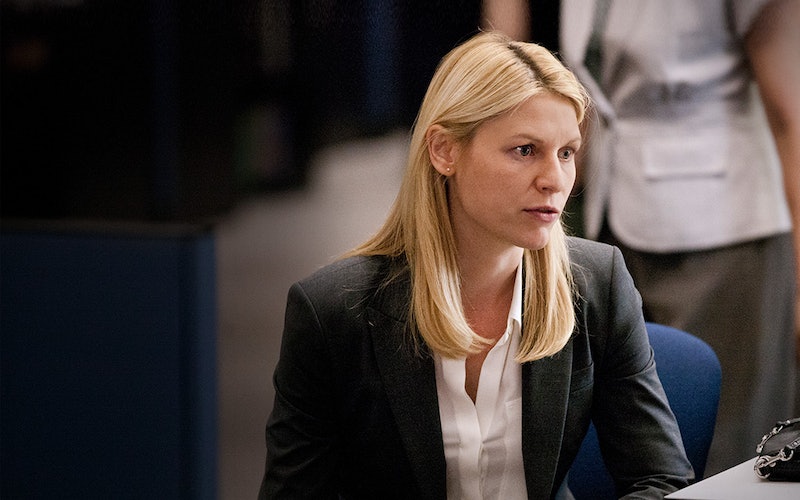 Homeland's Carrie Mathison has been called the best female character on television, and Claire Danes has the Emmys to prove it. In addition to her plucky disposition and her complicated romantic life, her anti-hero nature is also a fantastic showcase for Danes' chops and her ugly crying.

And while Carrie is a lot of things, put together is not one of them and the disintegration of her mental state continues in "Uh... Oh... Ah..."

Brody's out of the picture and so are the bi-polar meds. That means a lot of twitching, tweaking out, and calling reporters to talk about the leaking of secrets. And when Carrie's gone so crazy on a reporter that the reporter actually starts looking around for security, you know something is going on. Unfortunately for Carrie, crazy usually makes for a great news story.

Pretty soon, she's chained to a gurney, thrashing about in her gown screaming, "I'm beyond calm. I'm fucking zen!" But there are good parts of looking like a banshee and turning away from visitors like a sulky teenage girl (Danes shows off her long, blond locks fallen straight out of The Virgin Suicides).

The new heartthrob on the street Quinn visits the hospital and is genuinely kind and concerned. But that does little good. Toward the end of the episode, Quinn tells Saul, "We did that to her… I want you to know that what's going on here is not okay with me."

And when Saul responds, "Have a little faith."

Of course Captain Studdly's disillusionment with the CIA is more complicated than just one bi-polar former CIA operative. The dead girl still haunts him and he informs Saul that he'll be leaving after all this is over. While Quinn hasn't exactly gone rogue, his feelings about the collateral costs of the War on Terror bear an eerie resemblance to what Brody felt after the death of Abu Nazir's youngest son.

In slightly lighter developments, the CIA bombing has necessitated some mass hirings, one of whom is a banking specialist now working with Saul. Whether you're on the side that Homeland is Islamophobic or simply portraying the prejudice against Muslims in America post 9/11 with a sharp eye, you'll get your proof with Fara Sherazi.

Played by the ridiculously gorgeous Nazanin Boniadi (who has been frumped up for the role), Saul calls her "a kid with a headscarf" and after she works well into the night trying to trace banking records to figure out who funded the CIA attack to no avail, Saul tells her, "You wearing that thing on your head — which is your right to wear it, you better be the best goddamn analyst the CIA has ever seen."

Well, she proves to be pretty damn good and tough, too. During a meeting with a group of shady bankers, she scolds them about their role in global evil dating back to the Opium Wars. Of course, they don't take it too kindly and walk out. Nor does a Congressman who reminds Saul that the job of the CIA is to find terrorists and tie them up with little bows to bring before the government, and not to bring "down the international banking system." Since, well, bankers donate.

On the soap opera that is Brody's family front, Dana breaks into the hospital in the rain and has sex with Leo on a gratuitously large pile of clean sheets in the laundry room. They wake up looking like baby angels in some clouds straight out of Precious Moments, so I guess all is forgiven? Oh, but then they get caught. Bummer.

The episode ends with Saul visiting Carrie. She looks totally out of it, but that doesn't mean she doesn't hear him when he whispers, "I'm so sorry." She still has the wherewithal to bark back, "Fuck you, Saul" with her crazy-eyes intact.

But then she quickly looks away, hurt like a puppy that's been kicked.