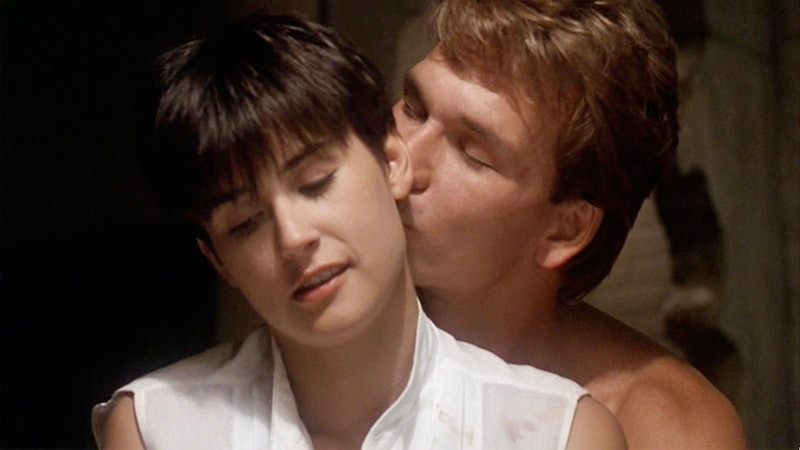 There are a lot of people wondering if Fifty Shades of Grey will be a cinematic success or not, and while the jury is still out, even in a worst case scenario there is something addictively captivating about silly movies that are supposed to be sexy. Within these failed films, which range from campy to just plain bad, are the awesomely awful sex scenes that make them so memorable. These #sexfails will garner giggles instead of groans of ecstasy, but will probably end up giving you the same amount of pleasure in the end. Just as there is no truly bad pizza, can there ever really be a truly bad sex scene?

#Sexfails are a matter of taste, so while some might watch a scene and swoon at its libidinous brilliance, others will choke on their popcorn. There are plenty of lists out there of "good" and bad" sex scenes, but far fewer compilations of those that ride the fine line of "good-bad." As I live for awkward laughs, uncomfortable eye rolls, and over-the-top absurdity, I believe that a perfect failed sex scene might be more difficult to make than a successful one. After all, it takes a lot of talent to make something so natural seem so alien. Feast your eyes upon a few of the greatest cinematic #sexfails of our time.

The infamous pool sex scene between Elizabeth Berkley and Kyle MacLachlan is campy perfection. After the two get wet, Berkley begins by giving MacLachlan an underwater blow job. How is this even possible, you ask? Does the penis produce oxygen when fully submerged? It only gets better, because Berkeley then rides MacLachlan like he's an amphibious mechanical bull, slapping seizure-like against the water as they get off in aquatic ecstasy.

This aggressive sax, I mean, sex scene between Rebecca De Mornay and Antonio Banderas is also accompanied by the worst bleating brass melody you've ever heard. After De Mornay slaps Banderas on the face, they jump into a passionate session which has her licking her way down the small of his back to his ass, which she proceeds to take a healthy bite out of. The shot lingers, so you can really take in her mouth, gnawing at his perky cheeks. Yum.