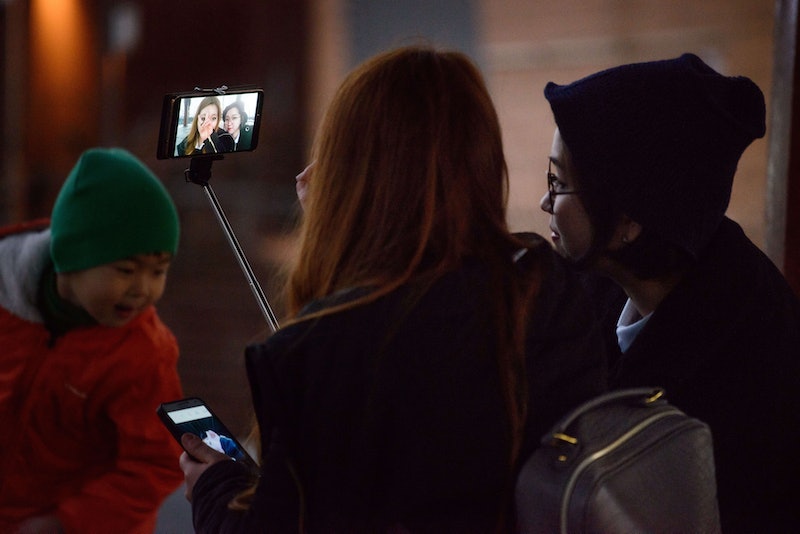 There's great news for anyone who loathes the latest unnecessary and disrupting tourist must-have — the selfie stick. Museums across the country are banning selfie sticks to avoid the accidental destruction of a work of art or another visitor being injured. Americans are fully embracing the selfie stick and sales have gone through the roof, but everyone will have to revert back to the primitive hand-held selfie if they need a picture of their face in front of a famous Monet.

Many of the museums list the banned accessories as "extension poles" under their museum or photography policies, but the Cooper-Hewitt Design Museum cuts right to the chase and says, "No tripods or selfie-sticks, please." The bans are really just an updated version of longer-standing museum policies that forbid tripods and monopods in place at most U.S. museums, including the National Gallery of Art and the Smithsonian Air and Space Museum.

Despite the bans, museums aren't totally anti-selfie — after all, Jan. 21 was #MuseumSelfie day. Most allow no-flash photography inside the exhibits; they just don't want visitors waiving around potentially dangerous poles with a smartphone attached to the end. Plus, taking a museum selfie without a selfie stick requires more talent, allowing you to show off your best selfie skills.

As sad as some selfie enthusiasts may be, these bans are no surprise. Many museums prohibit backpacks for fear that they'll bump into pieces of the exhibition and selfie sticks are much more intrusive and more difficult to maneuver. Art museums have reason to be on high alert when it comes to protecting their prized pieces, considering a woman at the Met fell onto Picasso's "The Actor," tearing six inches of the canvas, in 2010.

For museum-goers who aren't concerned about Instagramming the perfect picture in front of a well-known painting, the bans will be warmly welcomed. Locals can once again visit their favorite museums without ending up in the background of strangers' selfies and having to sidestep the protruding poles to avoid a hit to the head. There's nothing worse than trying to see an exhibit that's blocked by personal photoshoots and selfie sticks in museums would only exacerbate the problem.

More like this
Read Dan Levy's Heartbreaking Message After The Club Q Shooting
By Stephanie Topacio Long
Iran Has Issued A Death Sentence Over Mahsa Amini Protests
By Catharina Cheung, Darshita Goyal and Maxine Harrison
The 5 Best Brushes For Short-Hair Dogs
By Tiana Crump
The 8 Best Walking Shoes For Metatarsalgia, According To A Podiatrist
By Lauren Moison
Get Even More From Bustle — Sign Up For The Newsletter