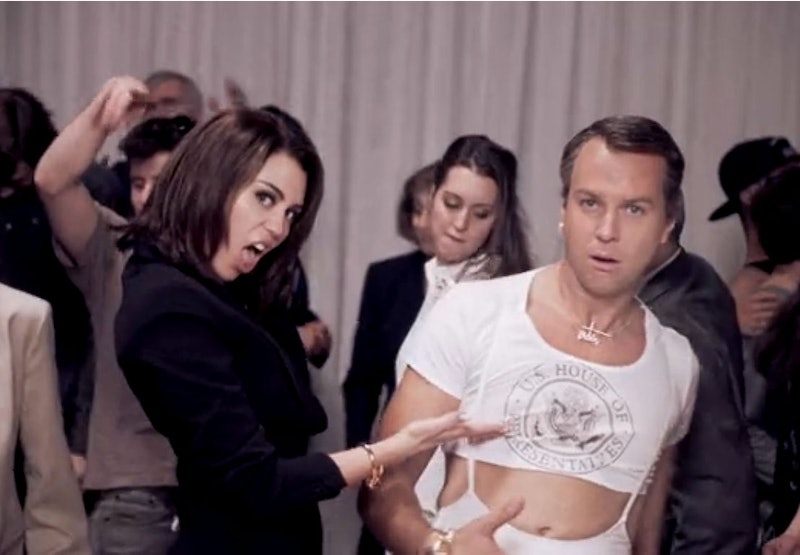 Pop Culture's most ubiquitous singer Miley Cyrus hosted Saturday Night Live this weekend, and while she basically Vanessa Bayarded her way through every skit (my ears are still recovering from all the shouting), one pre-recorded sketch redeemed the entire episode: "We Did Stop," a "We Can't Stop" parody featuring Cyrus as Michelle Bachmann and Taran Killam as sexy baby John Boehner celebrating the Government Shutdown.

The video, which would still be called a Digital Short if Andy Samberg was still around, mimics "We Can't Stop" about as perfectly as the phrase "sexy Michelle Bachmann" will allow. From replacing Miley's dancing bears with dancing plush elephants and the Miley-esque dolls with Abraham Lincoln Barbies, no detail is missed and the result is pure hilarity — thanks is great part to Killam's fierce performance as the expressionless Speaker of the House. Werk, Taran. Werk.

Of course, there may be one unfortunate side effect to all this political twerking: with Halloween only weeks away, Miley's skimpy take on Bachmann might just be the easiest costume in most women's closets. And while I doubt most dudes have a white wrestling onesie just hanging out in their closets, fake-Boehner's OHIO get-up might just be worth getting a little creative at American Apparel.

More like this
On TikTok, Miley Cyrus’ “Malibu” Is The Soundtrack Of Growth
By Courtney Young
The WAGatha Christie WhatsApp Messages Have Been Released — & They're Wild
By Sam Ramsden
Prince Harry Spoke Out About Archie & Lilibet’s Futures And What Worries Him The Most
By Sam Ramsden
Twitter Can’t Get Enough Of The WAGatha Christie Trial
By Nola Ojomu
Get Even More From Bustle — Sign Up For The Newsletter