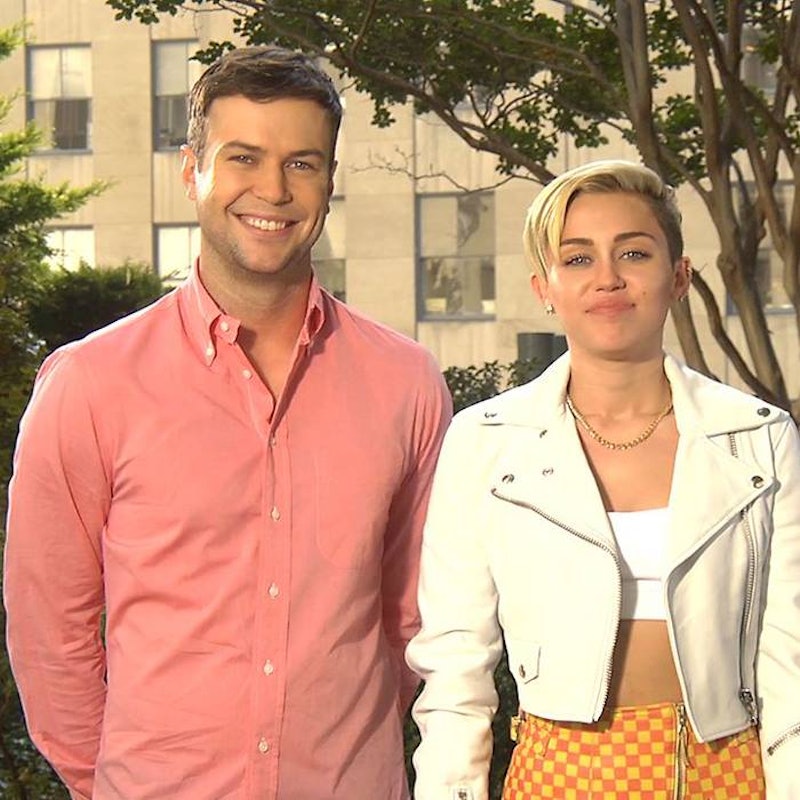 Last week, Tina Fey hosted the season premiere of Saturday Night Live. But for the sketch comedy show's second episode, the show has selected a not-quite-as-reliable host: "Wrecking Ball" singer and controversial VMA artist Miley Cyrus. How exactly are the two stars different? Well, there's their differing SNL experience, general sense of humor, classiness, sanity, and way they attract my love/hatred. Still, someone at SNL decided that ratings are indeed important and brought the former Hannah Montana star back to host for the second time, and also serve as the musical guest.

Cyrus has occupied headlines quite a bit in the past few weeks — so many, that even actual fans might admit we've seen too much Miley. Still, it was smart for SNL to have host this week. As we already mentioned, all of the attention Cyrus has been getting will definitely yield great numbers from Nielsen. But please, SNL: People will already be tuning in, so don't just draw even more attention to Cyrus' recent antics. Give her something new to do.

She can prove that she's able to laugh at herself in the monologue. All of the opening jokes can address the rumors, the revealing interviews, the clothes, the hair, all of it. (Heck, she's already proven she can laugh at herself in this week's SNL promos.) But then it stops. So to Lorne Michaels and Miley, don't make us sit through an hour and a half of Miley making fun of Miley. And while you're at it, here are a few other things we don't want to see during the show.

The feud between Miley and O'Connor has gotten completely out of hand. O'Connor went from unnecessary patronization to slut-shaming in her first two letters, and now is threatening to sue with her third. Miley didn't help the matter by cruelly comparing O'Connor and Amanda Bynes in a way that offends anyone with mental health issues. Remember the last time SNL got involved with O'Connor? It caused one of the biggest controversies in the show's 39 seasons. Michaels will likely not want to hear a single word about O'Connor (though he did let Tina Fey mock the incident on 30 Rock). For everyone's best interests, let's just pretend none of this happened during the show. There's no way to mention it that wouldn't make matters even worse.

I don't think any of us will understand Cyrus' obsession with her own tongue, though she tried to explain it to Rolling Stone, "I just stick my tongue out because I hate smiling in pictures. It's so awkward. It looks so cheesy." You know what else is so awkward? Being a 20-year-old who constantly sticks her tongue out. Also, are concerts the same thing as pictures now? Anyway, try to keep it in your mouth on Saturday, Miley. You made fun of it in the promos, it's addressed, let's move on.

Everyone knows that Cyrus and Liam Hemsworth broke up after three years together, including a one-year engagement. Cyrus may be famous and open about a lot of things, but she shouldn't have to poke fun at or in any way address the end of her relationship. It'd be insensitive of SNL and a little immature of her.

I know there a zero percent chance of this happening, but I would love it if there was no twerking on Saturday. It went from a dance move that Cyrus appropriated for her "We Can't Stop" video and randomly became obsessed with. Now, it's a buzz word that every show, comedian and human with a Twitter can't stop using in an attempt to be funny. I'll give it to SNL, their quick twerk reference was great in last week's "Drunk Uncle" sketch, but let's end it there. If there has to be twerking on Saturday, let's try to keep it to the performances.

Speaking of cultural appropriation, let's try to keep the rapping to a minimum, Miley. And by minimum, I mean please don't do it. If you have no idea what I'm talking about and can't imagine why I even think Miley would wrap in the first place, listen to "23." The Mike WiLL Made It song features Cyrus alongside Juicy J and Wiz Khalifa. She raps — or tries to. I never thought I'd say this, but let's hope she sticks to "We Can't Stop" for SNL.

Speaking yet again of appropriation, Cyrus really needs to stop using the word homie — also because it's 2013. In her MTV documentary Miley: The Movement , she calls her mom her homie in what I think is supposed to be a sweet moment about their relationship. The key phrase is "supposed to be," it was actually just weird.

More like this
Kate Bush Reacts To “Mad” Revival Following 'Stranger Things' Cameo
By Sam Ramsden
Photos Of The 'Elvis' Cast vs. Their IRL Counterparts Will Have You All Shook Up
By Grace Wehniainen
Everything To Know About J-Hope From BTS’ Solo Album ‘Jack In The Box’
By Stephanie Topacio Long
Taylor Swift's “Carolina” Theme For 'Where The Crawdads Sing' Soundtrack Is Here
By Jake Viswanath
Get Even More From Bustle — Sign Up For The Newsletter