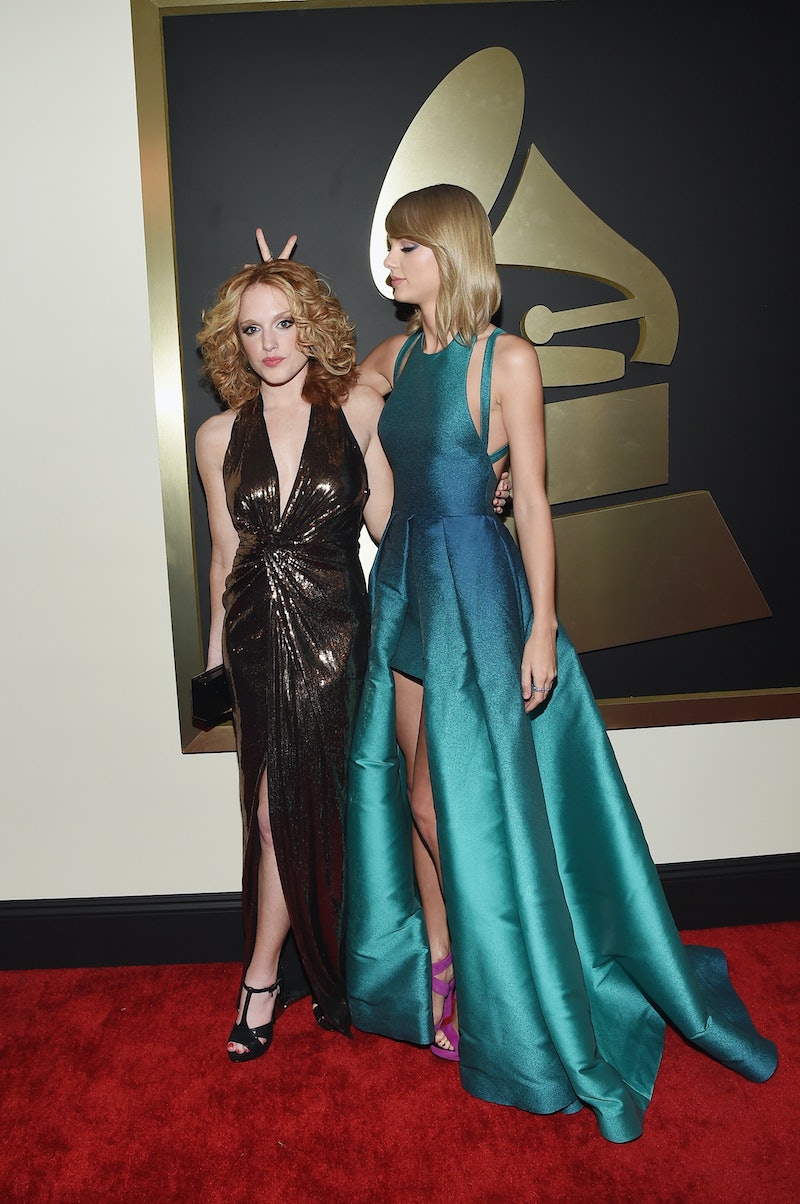 Taylor Swift is known for having a lot of best friends, everyone from Ed Sheeran to Selena Gomez and Karlie Kloss have been known to be tight with T. Swizzle. But even with a long list of besties, none of them compare to her BFF. You know, her absolute best friend. And for all of the die-hard Swifties out there, you know exactly who this "Shake It Off" singer calls her ultimate girlfriend. It’s no surprise who the curly redhead dancing with Taylor at the Grammy’s last night was. But if your love of Taylor Swift has evolved over the last few years, you might be left in the dark. Her name is Abigail Anderson, and she is the one true BFF of Taylor Swift.

Not to say a girl can't have a handful of close besties (and she should!), but this friendship goes way back to a time when Taylor was still a curly-haired country-crooner with a Southern accent. Before she was famous, these two were the closest of friends, and still are. You can even see Anderson in Swift's music videos and arm-in-arm with the singer at award shows and celebrity-laden parties. Being a BFF to Taylor Swift? Not too shabby. Take a look at these seven reasons why Taylor Swift and Abigail Anderson are the epitome of what it means to be BFFs.

They Obsess Over Boys Together

Not only did they share a mutual love for Justin Timberlake on Ellen, but they've also been known to drive past their exes houses, just casually "checking up on them."

They Know You're Never Too Old To Act Like Kids

Even as teenagers, they knew you were never too old to play dress up or record funny YouTube videos together.

They Have One Another's Back Against Frienemies

We all know that Taylor Swift and Katy Perry aren’t exactly on talking terms right now. And while Taylor has been more discreet about the supposed feud, that didn’t stop Abigail from taking to Twitter after Katy’s huge Super Bowl performance.

They Help Each Other Through Heartbreak

In her hit song "Fifteen" Taylor mentions Abigail quite a few times when she talks about sitting next to each other the first day of school and then leaning on each other after big heartbreaks. Abigail even makes a special appearance in the song's music video.

They Support Each Other's Careers

Even with all the fame and stardom that comes with Taylor's career, Abigail has stuck with her through it all. And just as importantly, Taylor supports Abigail's career too. She once told ET that a good girlfriend is someone who, like herself, is deeply passionate about what their work.

"The fact that she is so passionate about what she does allows her to be able to relate to me on that level, that I'm so dedicated to what I do."

They Don't Let Distance Come Between Them

Even though Abigail lives in Kansas and Taylor lives in NYC, the two still make time to be together (including Taylor's huge birthday bash). Of course, Abigail flew out to LA to be her date to the Grammy's this year, but once Taylor flew out to Kansas University to hang out with Abigail in her Journalism 101 class.

They Both Know How To Shake Things Off

OK, so here is the obvious one and we aren't just talking about their dance moves at the Grammy's. Like true BFFs, the two have been through so much together but they still managed to come out stronger than ever. Long live the friendship of Taylor and Abigail!