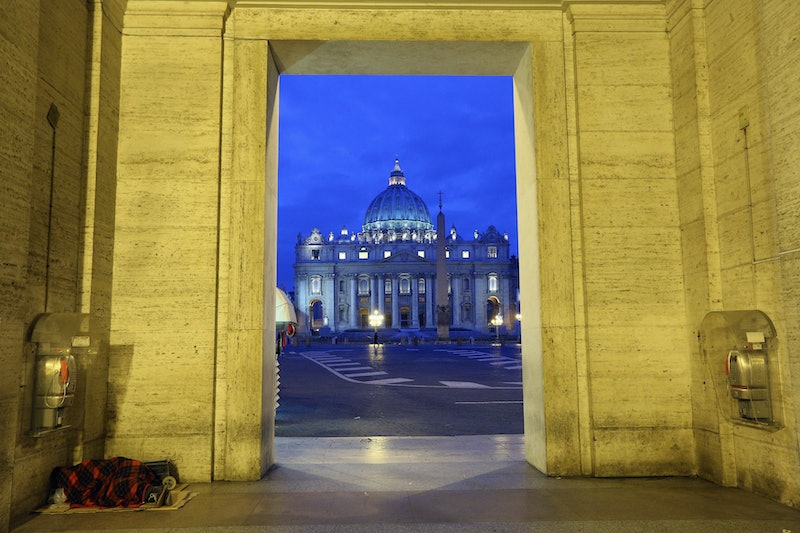 Pope Francis' compassion for the poor continues. Commissioned by the pontiff himself, a public restroom off of St. Peters Square was transformed by the Vatican into a free shower unit and barber's booth for the homeless. Instead of trying to eradicate its homeless population — like some U.S. cities have done by banning things homeless people do, such as camping in public, sleeping in vehicles, and begging — the Vatican is actually helping them.

Each person who uses the bathroom will receive two free kits containing a change of underwear, a towel, soap, toothbrush, toothpaste, deodorant, and a razor and shaving cream for men, donated by various companies and individuals. Konrad Krajewski, the Pope's Almoner (distributor of alms), will purchase future supplies using money raised from selling parchments with a Papal Blessing.

The three showers will be open everyday except Wednesdays during the Pope's general audience. Krajewski also visited 10 other parishes in different parts of Rome with large homeless populations to ask them to build showers, which will be paid for by the Pope's Office of Papal Charities. He told the Vatican Insider that they are not meant to become big community centers that will cost a lot of money, but just facilities for people in neighborhoods without public restrooms and where the homeless cannot use the toilets in restaurants.

Haircuts will be available at the barber's booth on Mondays by barbers volunteering on their days off and students from a local beauty school. Barbers and hairstylists in other cities sometimes give haircuts to the homeless on their own time, but rarely is it an organized event with a designated booth. New York City hairstylist, Mark Bustos, who gives free haircuts to the city's homeless on his days off, uses his Instagram to show how much of a difference a simple haircut can make for a homeless person's confidence and sense of self.

Pope Francis continues to prove his commitment to helping the poor. He recently raffled off papal gifts, including a digital camera and illy coffee maker, to raise money for his Office of Papal Charities' projects. After giving out 400 sleeping bags to the homeless over Christmas, Krajewski's office distributed 300 umbrellas left by tourists in the Vatican Museums last week to help with Rome's rainy days.

Having access to showers and haircuts will make a huge difference to Rome's homeless and this project should serve as an example for U.S. cities. Everyone needs access to basic bathroom facilities and toiletries, and the Vatican has developed a favorable solution.